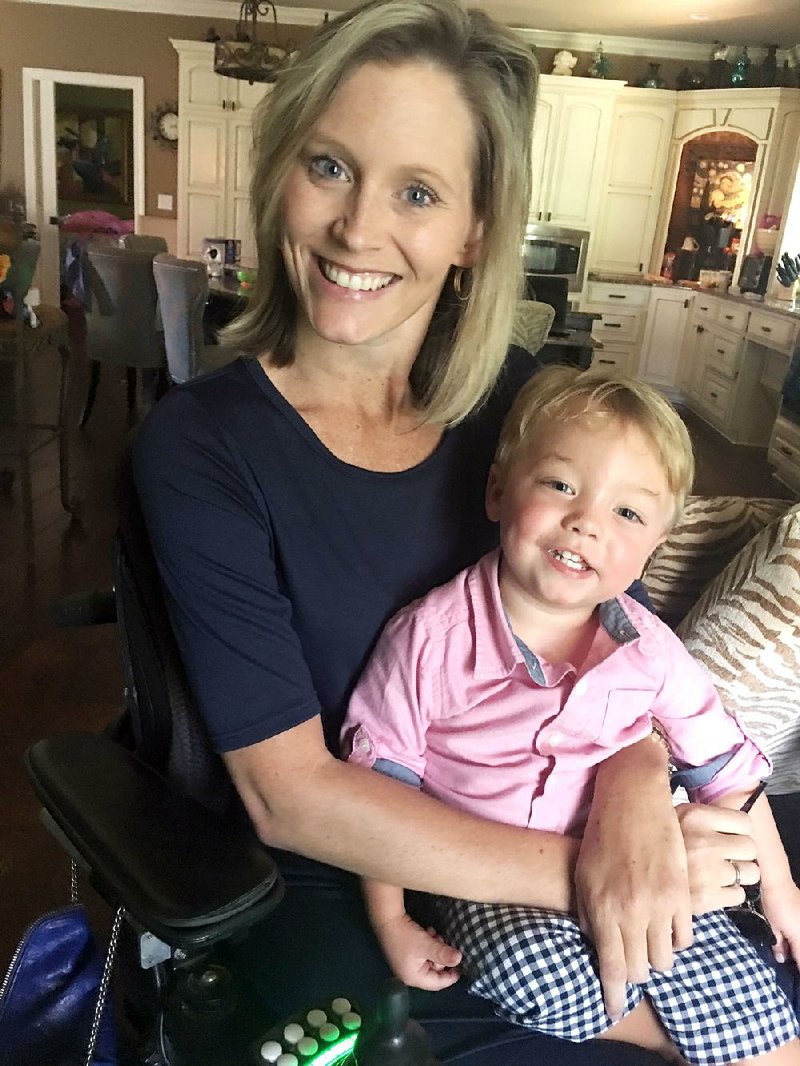 Life didn’t end for Jen Goodwin the day a boating accident broke her spine; she has friends, a supportive family and the love of her son, Beckham.

Jen Goodwin did everything she was supposed to do -- she graduated from college, bought her first house and accepted her dream job in Little Rock. Then in 2008 she decided to spend a June day on Lake Hamilton with her neighbor.

The two were boating around the lake, looking at the lights bouncing off the surface when he, standing on the edge of the boat, fell.

His head slammed onto the back of her neck, and she immediately knew that something was off.

"I had the whole white light, warm, pleasant feeling initially, and then all of a sudden after that it was like a red-hot, searing pain," Goodwin remembers.

He wouldn't take her to the hospital. He kept insisting that what she felt wasn't real -- she was overreacting. After he had dragged her back into her seat in the boat, returned to shore and gotten help lifting her into the back seat of his truck, she finally convinced him to take her to the emergency room.

"At that point, I used words I've never used in my life to tell him which hospital to take me to, and so that was the point that he realized I was serious because he knew I didn't talk that way," she said.

When she arrived, doctors quickly determined that her neck was broken at the fifth and sixth cervical vertebrae, C5 and C6. Her spinal cord was stretched and looped outside her bones, she said.

The doctor came to show her family the X-rays. Goodwin's mom, a nurse, kept flipping the film over in her hands, trying to twist it to an angle where her 25-year-old daughter's neck wasn't broken.

Goodwin later learned that it was an incomplete injury, which means although she has quadriplegia, she could learn, through extensive rehabilitation, to move again.

Today at age 35, she has altered sensation in most of her body, can lift one leg a few inches off the ground and is able to move both arms. She has little control over her fingers.

Rehab was an arduous, incremental process of learning to live life with a spinal cord injury. But during the work she made two friends. The overlapping of their three lives created a web of support that still uplifts them today.

There were 2,527 active cases of spinal cord damage in the state as of January. About half were related to physical trauma and the other half were from disease, according to data from the Arkansas Spinal Cord Commission, which was established in 1975 by the state to support people with spinal cord disabilities.

The spine is a series of bones and cartilage from your neck to your tailbone that protects the fragile spinal cord. The spinal cord, which has a consistency close to that of toothpaste, resides inside the bones of your spine and carries the electronic signals that allow you to feel a hug, drive a car and walk.

Arkansas law (A.C.A. 20-8-206) requires hospitals to contact the commission if any patients come in with a spinal cord injury or disease that meets certain qualifications. Sixteen case managers serve all 75 counties, advocating for the rights of people with spinal cord problems and connecting them with resources, Executive Director Terra Patrom said.

The commission just added two case managers -- caseloads were running as high as 200, with not much chance of those numbers decreasing. Arkansas is the only state in the nation that has an independently functioning commission that serves clients through their entire lives.

Before she was promoted to director, Patrom was Goodwin's case manager and helped her get set up with wheelchair ramps when she went home.

To qualify as an open case with the commission, patients must meet at least three of four medical criteria: lack of normal motor control, lack of sensation, loss of bladder control or loss of bowel control.

After Goodwin connected with the commission, she was moved to Baptist Health Medical Center in Little Rock to begin rehabilitation.

As she was beginning to re-learn how to dress, scratch her nose and roll over, Brent Adams was just settling down to life with his family in Florida, having spent months at the same unit.

On Dec. 8, 2007, Adams was riding his dirt bike in Mayflower when he overshot a jump. The accident left him with collapsed lungs, a shattered shoulder and a snapped spine.

"My family wasn't expecting me to survive it," Adams said.

His injury was at the 11th and 12th thoracic vertebrae, T11 and T12, lower on the spine than Goodwin's injury. His is also an incomplete injury, meaning the spinal cord wasn't severed. He was diagnosed with paraplegia; he is able to take steps occasionally and has almost complete control of his arms.

He moved back to Florida for two years to be closer to his family; then he came to Arkansas to attend college at Harding University. During that time, Adams was doing intensive therapy, including two three-month stints at Shepherd Center in Atlanta, a leading rehabilitation clinic for spinal cord injuries.

During his first session in Atlanta, he learned that Goodwin -- whom he had spoken to several times by phone because health professionals connected them for emotional support -- was just down the hall. While learning to crawl, shift from their chairs into beds and trying to walk using electric stimulation, supported by walkers and guided by trainers, they got acquainted. (Both took steps, but neither is able to walk normally.)

They've renewed their friendship and spend time together now that Adams, 36, has moved back to Little Rock. He works on the business side at 10 Fitness Health Club in Little Rock, ensuring that employees are getting their health benefits.

Goodwin went back to school after her injury, switching career paths from business to law. She had an accessible house designed for her, with low countertops and floors that are easy for her to navigate in her chair. Her parents live right next door, and she works at Arkansas Children's Hospital on medical-legal partnerships for families.

Something was missing, though. She wanted a baby.

She decided on artificial insemination. Then she consulted someone with a spinal cord injury who'd had a baby, Andrea Reaves, to discuss the complications possible with pregnancy for someone with quadriplegia.

Nearly 20 years ago, Reaves was 16 and had only had her driver's license for a few weeks when she hydroplaned and hit a tree in Hot Springs. Her neck broke at the C6 vertebra, and it was a complete injury. She is in a wheelchair and can move her arms, but not her legs.

"I was very miserable," she said. "For the first four years, I didn't want to leave the house."

She had struggled with depression before the wreck, but through therapy and support from her partner, Robbie Burns, she is doing better.

They conceived their daughter, Avalee Grace Burns, in 2014, and the pregnancy was difficult. Avalee came early, and Reaves was in and out of the hospital for about a year afterward.

Reaves, 34, works at Sales and Spa Area Independent Living in Hot Springs as an advocate for the rights of the disabled, including people with spinal cord injuries. She still struggles with anxiety, especially about the thought that insurance cuts could threaten her Medicare benefits.

"You constantly live in fear that you will be institutionalized, and that's where you'll remain." she said. "That's a death sentence in my mind."

Reaves and Goodwin bonded over a mutual desire to be mothers. Goodwin asked Reaves questions about potential complications with pregnancy and how she completed day-to-day tasks as a mother.

Their children are about two years apart in age, and Reaves said having such connections helps her feel better.

"I think just with age and with time, acceptance," Reaves said, listing the ways she has coped with quadraplegia. "Knowing that I am worthy, meeting other people with spinal cord injuries, connecting with others and seeing that I'm not alone."

Once the insemination took, Goodwin visited a clinic for physical therapy students taught by Dr. Twala Maresh, a senior clinical instructor in the physical therapy department at the University of Central Arkansas.

At Maresh's clinic, six or so clients come in each semester to work with students. The clients get free rehabilitation services, and the students get to practice their skills.

Goodwin wanted to learn the skills she would need to care for her child by herself. Students worked with her on picking up a baby and getting him into and out of his car seat.

Now Beckham, her son, is 2 and he loves cars and traveling. Over the summer, the two flew to Colorado for a vacation and he peered up at the flight attendant with his bright blue eyes as soon as they boarded.

"Do you have peanuts?"

Goodwin laughs when she recounts this story. Her merriment is real although her laughter clicks softly out of her chest because the injury made it more difficult for her to fill her lungs.

Goodwin, Reaves and Adams all spend time together for support, because they like one another and to help other people. They meet with newly injured patients to encourage them and teach them about the resources available in the state.

And they have game nights at Goodwin's house every once in a while.

"You can talk to every therapist, every person in the world, and they just don't get it," Adams said. But Goodwin and Reaves? 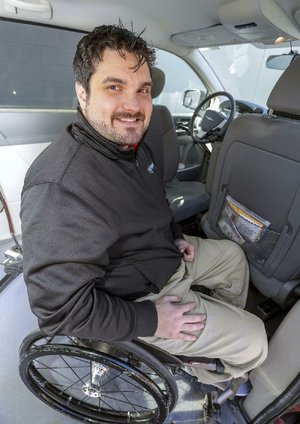 Photo by John Sykes Jr.
Adapting to the challenges of paraplegia, Brent Adams works in the business office of 10 Fitness Health Club, ensuring the employees get their health benefits. 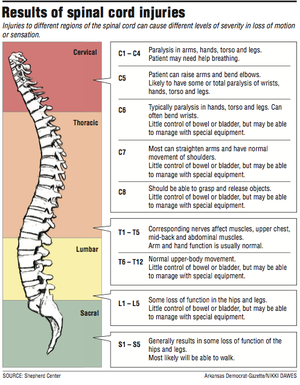