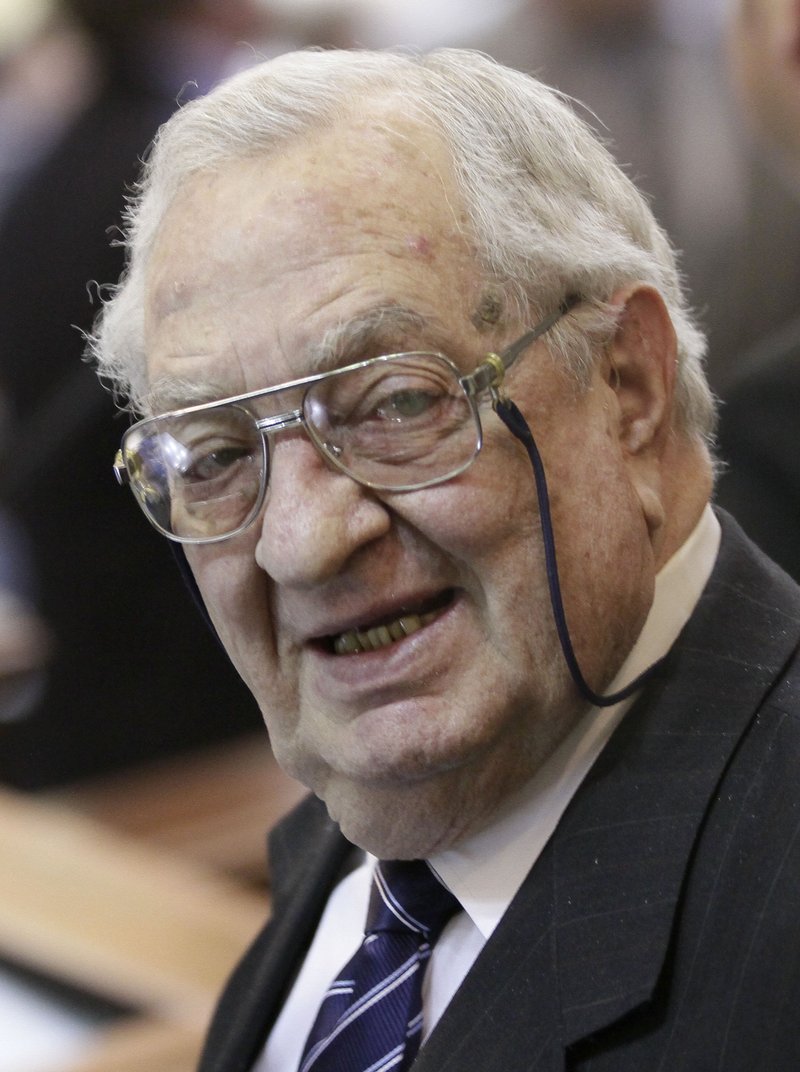 Tim Massanelli attends the opening of the fiscal legislative session in the House chamber at the Arkansas Capitol in Little Rock on Feb. 13, 2012.

Tim Massanelli, the longtime parliamentarian of the Arkansas House of Representatives who served 19 House speakers and seven governors and endeared himself to scores of lawmakers, died Monday morning, officials confirmed. He was 85.

The Pine Bluff native began working in the House in 1973 before becoming parliamentarian in 1975. He expected to stay for only two years but remained for nearly four decades until retiring in 2011.

Massanelli's exhaustive knowledge of parliamentary procedure and House rules, coupled with his affable personality, made him an institution, said former governors, representatives and colleagues on Monday.

Former Gov. Mike Beebe said he and other politicians called Massanelli the "Godfather" of the state House.

Beebe's predecessor, former Gov. Mike Huckabee, said there will never be another man like Massanelli, "the consummate process keeper of the House."

Shane Broadway, who served as speaker from 2001-03, said there's no doubt that Massanelli left the House better than he found it.

[🆕: Sign up for the Arkansas politics and legislative updates email newsletter]

"All the things that have been good that have come out of that chamber, he has had an influence on," Broadway said. "Every member who has ever done anything in that chamber trusted Tim for his advice."

The parliamentarian sits beside the speaker when the House is in session and ensures that the rules and procedures are properly followed.

In a 2009 interview for the University of Arkansas David and Barbara Pryor Center for Arkansas Oral and Visual History, Massanelli described his role with an analogy.

"It's kind of like being a fire marshal," he said. "Well, you're trying to stop the fires before they start."

At that, Massanelli was a master, said John Paul Capps, who served as speaker from 1983-84.

"He could see what was coming in the future," Capps said. "He was always 10 steps ahead."

Born in Jefferson County in 1933 to Italian immigrants, Garland Edward Massanelli didn't go by "Tim" until a few years later, when his uncle gave him the nickname after Western movie actor Tim McCoy.

Massanelli attended Drury University in Missouri before returning to Arkansas, where he worked on the family farm, owned a liquor store and ran a coin-operated machine business before going to work at the state Capitol.

As parliamentarian, Massanelli oversaw the expansion of the House staff and the implementation of term limits in 1992. Shorter terms left legislators with less time to learn the rules and processes. Although it made his role and knowledge even more indispensable, Massanelli opposed shorter term limits, said current House Parliamentarian Buddy Johnson.

"If he had a selfish bone in his body, he might have relished [term limits]," said Johnson, who was mentored by Massanelli. "But he didn't."

After his retirement, House members established an endowed scholarship for political science at the University of Arkansas at Little Rock in Massanelli's name.

His passing loomed over the opening day of the Legislature's fiscal session. The House began with a moment of silence to honor him, and Gov. Asa Hutchinson mentioned the late parliamentarian in the opening of his remarks to lawmakers, calling Massanelli a "longtime stalwart" of the House.

At the Capitol and on social media, lawmakers paid tribute to Massanelli, exchanging stories and lessons they learned from him.

A common anecdote that lawmakers shared described the tour Massanelli took freshman representatives on around the Capitol before their first sessions in the assembly. House Speaker Jeremy Gillam, R-Judsonia, said the tour included taking new members past the old photo collections of the state's first few General Assemblies. Those photos hang outside the House chamber.

"Everybody thought they were the greatest thing ever for this institution, and it would stop after they left," Gillam remembered Massanelli saying. "But it kept going. Remember this place was here long before you got here, and it will last long after you leave."

Many members recalled various "Tim-isms," as Broadway called them. They were some ground rules he'd repeat, particularly to newer members.

One everyone heard was: "If you don't have anything to do, don't do it in the doorway," Broadway said with a grin.

Massanelli was also an ordained deacon, serving at Our Lady of the Holy Souls Church in Little Rock.

"My family and the diaconate is one of the greatest things that happened to me. Sometimes I can't grasp how did I get here. Why was I so lucky to be pushed or pulled?" Massanelli said in an interview with Arkansas Catholic in 2012. "We live each day as a blessing."

He was one of the handful of regular patrons who had a permanently reserved seat, marked by engraved nameplates, in the corner of the Capitol cafeteria. When one dies, his nameplate is moved to the Lazy Susan in the middle, where it remains in perpetuity.

Massanelli's nameplate will now move to the center of the table where it will stay -- a fitting metaphor for the lasting mark so many say he left on the chamber three floors above.