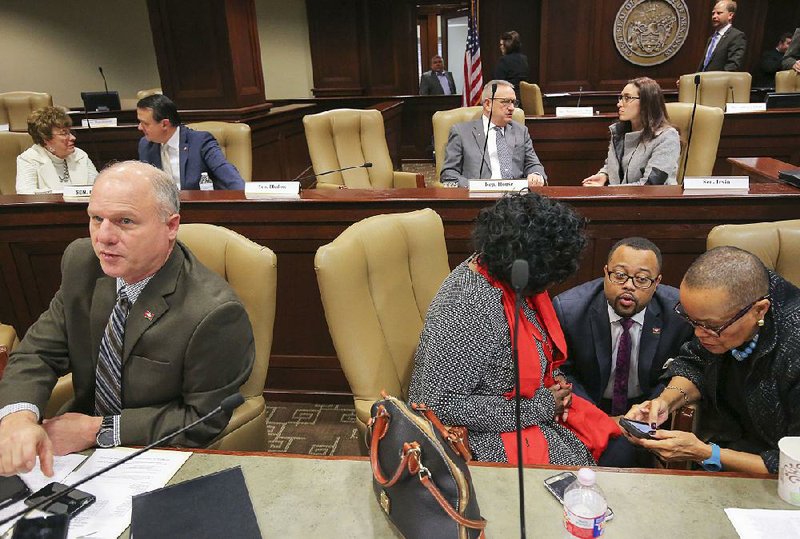 "The centerpiece is going to be the legislative effort to find what a year of work tells us is the absolute best policy for reforming our tax code and reducing the amount of the tax burden," the Republican from Sulphur Springs told reporters.

"One of the fundamental questions that we are trying to determine is, is it better for Arkansas to reduce that top rate in income tax or to do some property tax relief, or do some sales tax relief, or reduce some excise taxes?" said Hendren, nephew of the governor. "Which one of those is the best policy and makes the best return for the state of Arkansas and makes us the most competitive?"

For example, Hendren said Arkansas is one of the few states in the region that taxes business inventory through personal property taxes, and that makes it difficult to attract distribution warehouses, which are locating in other states.

"We understand what the governor wants, and I agree that we can find that type of tax relief over the next period of time. Whether it's all in one fiscal year, whether it is over a couple of fiscal years, may have to be looked at," Hendren said.

Sen. Joyce Elliott, D-Little Rock, who serves on the tax-overhaul task force, said she has tried to keep a open mind, recognizing "I am biased that I don't see how how we can afford more tax breaks."

"But I'm willing to be dissuaded. So far, we have lots more work to do. But so far, I am not dissuaded," she said.

"Why are we already talking about how much our tax break is going to be, and we haven't even resolved the issue of, should there be another tax cut? That's what is really bothering me," Elliott said.

The Tax Reform and Relief Legislative Task Force was created under a 2017 law to placate some lawmakers who said they favor income tax cuts for Arkansans with taxable income exceeding $75,000 a year. Hutchinson has repeatedly said he ultimately would like to cut the top individual income tax rate to 5 percent, but it could take a while to do that.

Hutchinson, who is running this year for a second four-year term, told lawmakers Monday that he wants them in the 2019 regular session to approve a plan to cut income taxes that would reduce revenue by about $180 million a year. He proposes to set aside $48 million of anticipated surplus funds in the fiscal session that started Monday; the $48 million would go into a restricted reserve account to use for future tax cuts.

Cutting the top income tax rate from 6.9 percent to 6 percent would apply to about 147,000 Arkansans making more than $77,400 in taxable income, Scott Hardin, a spokesman for the state Department of Finance and Administration, said Tuesday.

The 6.9 percent individual income tax rate for taxable income exceeding $75,000 became effective Jan. 1, 2016, under Act 22 of 2015, and an inflation adjustment that increases that threshold to $77,400 was announced last month to apply to income tax returns filed this year for 2017, he said.

According to finance department figures provided by Hardin, some examples of the average savings would be:

In 2015, the Legislature approved Hutchinson's plan to cut individual income tax rates for Arkansans with taxable income between $21,000 and $75,000 a year. The state projected it would reduce general tax revenue by about $100 million in fiscal 2017, which ended June 30, and each fiscal year thereafter.

The 2017 Legislature approved the Republican governor's plan to cut individual income tax rates for Arkansans with taxable income below $21,000 a year, effective Jan. 1, 2019. The state projects it will reduce reduce tax revenue by about $25 million in fiscal 2019 that starts July 1 and $50 million in each subsequent fiscal year.

Asked if there is particular reason that he is not specifying whether his latest proposed income tax cut would be phased in or not, Hutchinson said Tuesday in a written statement that "my goal is to have the tax cut effective on January 1, 2020.

"Obviously, there are a lot of factors required to be in place to make that goal workable and the recommendations of the Legislative Tax Reform Task Force are necessary to make this doable," he said.

Asked how the proposed tax cut would be financed -- using growth of state tax revenue, repealing tax exemptions and/or cuts in state spending in terms of millions of dollars -- Hutchinson spokesman J.R. Davis said a in written statement that "the task force is currently working on its recommendations for substantive tax reform."

"Our transformation efforts, growth in the economy and further recommendations from the task force will play a part in how the tax cut is paid for and implemented," Davis said.

The other task force co-chairman, Rep. Lane Jean, R-Magnolia, said, "The key is where the money is coming from.

"I think it needs to be a combination of some of the [tax] exemptions going away that are non-critical to business and agriculture, but I still think we need at least $100 million in cuts in government that the governor needs to find to make it happen, or the other option is we can phase this over two or three years," said Jean, who also is a co-chairman of the Legislature's Joint Budget Committee.

"The key is if we are going to try to do it all in one year, there has to be some cuts," Jean said.

Hendren said the task force's duties include "not just to figure out how to reduce our taxes, but also to reform our tax code."

"Part of that rate reduction may be able to be paid for by some reform efforts by getting rid of some exemptions that don't make sense, so it may not be a whole $180 million hit to the state budget because ... it depends on how we decide to do it," he said.

Sen. Larry Teague, D-Nashville, a task force member, said he's always in favor of any tax cut "as long as they are sustainable and affordable.

"You pass it [the $180 million tax cut] in '19, so it is effective in '20, and even if you have to phase it in, it is probably doable. We'll just have to be careful and continue to be sure that we don't spend more money than we've got," said Teague, who also is co-chairman of the Joint Budget Committee.

"It means less money for the whole pot [state budget], and education is a significant portion of the pot," he said.

"I don't know that you can do less" for the public schools because of the state's constitutional requirement to provide an adequate education to public school students, Teague said.

Hutchinson told lawmakers Monday that he wants to reduce the top individual income tax rate with "a commitment to the essential services of our state."

Rep. Jim Dotson, R-Bentonville, who serves on the task force, said Tuesday, "Now we have a solidly backed, executive branch goal to shoot for as a task force.

"I think it is an entirely doable initiative to be put forward to get to 6 percent ... but it is going to take a lot of cooperation and finding which areas we are going to look at, if there are exemptions we are going to have to do away with or there are other types of stuff to get to that target of about an $180 million reduction in overall general revenue," he said.

"Everybody wants to reduce every kind of tax that is out there, but how we do that in a responsible manner that we don't strip the entire government of revenue that is needed for services ... it is going to take a lot of debate and discussion over the next several months," Dotson said.

The calendar of public events of the 91st General Assembly for today, the third day of the 2018 fiscal session. 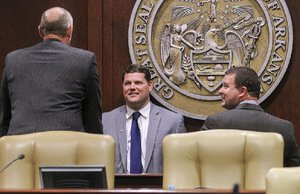