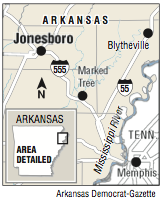 A map showing the location of Jonesboro, Arkansas

A favorable vote in Jonesboro's City Council would make a nearly $100,000 change in the 2018 budget to pay for construction costs on a new bike track, the latest in several budget increases for the city.

The proposed change will go before the full council and would further increase a budget that grew by about 18 percent this year in overall spending.

The Finance and Administration Council also voted this week to send a proposed increase in the Police Department budget to the full council. The money will be used to hire two new police officers, and the city's share would be $26,143.12. Most of the money would come from federal dollars for the Community Oriented Policing Services Hiring grant from the U.S. Department of Justice.

About $13 million was included in the original budget for capital improvements to the city, Mayor Harold Perrin said at his state of the city address. These improvements will include sidewalks, adding turn lanes in the town and work on a bypass project on Arkansas 18.

Chief Financial Officer Bill Reznicek said that as the town's population has grown, there have been more requests for sidewalk development, road repaving and other infrastructure changes to alleviate traffic congestion.

"Obviously to do that it takes money," Reznicek said. "It's kind of a balancing act."

In his introductory letter to the 2018 budget, Perrin acknowledged that some "tough challenges and financial decisions" were in store for the city, which anticipates a deficit of more than $13 million this year.

"Obviously this will result in a continued depletion of our excess reserve funds," Perrin wrote in the letter. "This trend will prevail for the foreseeable future unless we develop plans for alternative revenue sources."

Reznicek said the city has looked into models used in Fayetteville and Conway for impact fees as a potential source of money to make up the shortage.

Conway's impact fee is applied for road and park development for anyone who builds an "impact-generating development."

A fee would help defray costs for infrastructure and parks, the two focuses of this year's spending plan, Reznicek said. The bike track falls into this category, and when the city applied for the grant, officials decided to make room after they were sure they had the money rather than pre-emptively setting aside funds.

City Council members approved the track for Craighead Forest Park at the end of last month. It is set to be built on about 2 acres of land, and a smooth plastic cover will allow people to ride bicycles, roller blades, scooters or other non-motorized vehicles.

The plastic track, which loops and curls in the middle, will be surrounded by a dirt trail, according to plans from Progressive Bike Ramps, the company building the track. The dirt trail has a few wooden ramps scattered throughout. It also will be portable, so it could be used for city events, Perrin said during the Finance and Administration Council meeting.

"That's going to be really a good thing for the kids, and I guess adults, too," Perrin said.

The track will be free to users, said Danny Kapales, interim director of the city's Parks and Recreation Department.

Planning for the track began about three years ago as a way for children who aren't old enough to go for rides by themselves on the 17 miles of bike trails near Jonesboro to practice. Kapales said he helped draw up the original plans and then moved on to other projects.

"It's an opportunity for a parent that's not a mountain biker to take their kids there so they can hone their skills," he said.

Since the project began, Kapales said he has not been aware of many of the details surrounding it -- how much it would cost or where exactly the money was coming from.

After the initial plans were set, Kapales moved on to other projects, leaving the bike track to then-Director Wixson Huffstetler.

"I was the guy that drew up the original plans, got everybody started on it and then moved on," Kapales said.

Huffstetler announced his resignation from the department Monday after five years as director and eight as a city employee, citing personal reasons.

Huffstetler helped arrange for a grant from the Arkansas Parks and Tourism Department to pay half of the $197,930. The city is covering the other half, Kapales said.

City officials didn't know at the time that they would get the grant, so they didn't allot the money necessary in matching funds. There will be $98,965 set aside for the project, according to the ordinance.

A few other Arkansas cities, including North Little Rock, Cabot and Lowell, have similar bike tracks designed specifically for BMX.