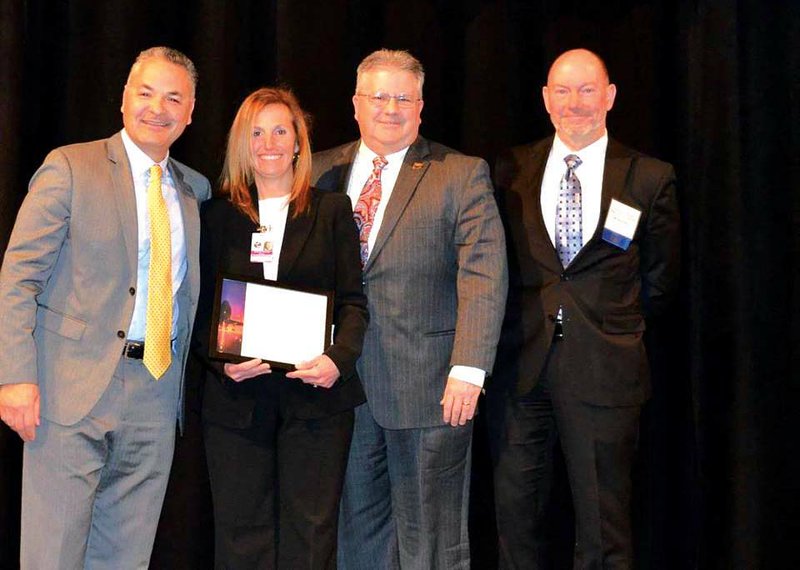 Michelle Anthony, manager of Dexter B. Florence Memorial Field in Arkadelphia, said she felt all these things and more when she and others from Arkadelphia learned that the local airport had received an award.

The Federal Aviation Administration, Southwest Region, presented the Arkadelphia airport with the Arkansas 2017 Airport of the Year Award Jan. 30 during a conference in Hurst, Texas.

“I felt so many emotions,” said Anthony, who has been manager of the airport since April 2016. “I didn’t even know they gave out these awards.

“This was the first regional conference the FAA has held since 2010 or 2011,” Anthony said. “I was still new in the business then and knew nothing.

Anthony was an administrative assistant at the Walnut Ridge airport at that time.

“There were about 500 people at the conference,” Anthony said. “I was just sitting there when I heard our name called. I was overwhelmed.”

“There are 92 airports in Arkansas. We are the only one that received an award in Arkansas. There was one award for each state in the Southwest Region (Arkansas, Louisiana, New Mexico, Oklahoma and Texas).”

“I was absolutely surprised. Ninety-two airports in Arkansas, and we are No. 1. We’re in pretty tall cotton,” Brinkley said.

“This ought to get our little economic engine running for us. This should let the transient flier going across the country know that we are an award-winning airport,” he said.

“I hope this will lead to more traffic at our airport and to more business in our county,” said Brinkley, who presented the award to the city’s board of directors on Feb. 6.

Glenn Boles, manager of the Arkansas/Oklahoma District office in Fort Worth, Texas, presented the award to Anthony and Brinkley at the conference.

“The operation and management of the Dexter B. Florence Memorial Field airport is excellent,” Boles said as he presented the award. “The sponsor has created a culture of ‘Safety First.’ They focus on enhancing safety at the airport, manage a disciplined capital plan and support FAA initiatives. Congratulations.”

Anthony said she believes the airport won the award as a result of several things that occurred during 2017: completion of drainage work, management of wildlife, safety improvements and FAA compliance.

“We might be small, but we are trying to help ourselves, not just standing still,”

Anthony said. “I think all of this combined helped us win this award.”

The airport, which is operated by the city of Arkadelphia, serves as a general-aviation airport for southwest Arkansas with 28 based aircraft. The airport also serves as an operational base for the Henderson State University flight training program, corporate aviation and recreational flying. The Henderson flight-training department is at the airfield.