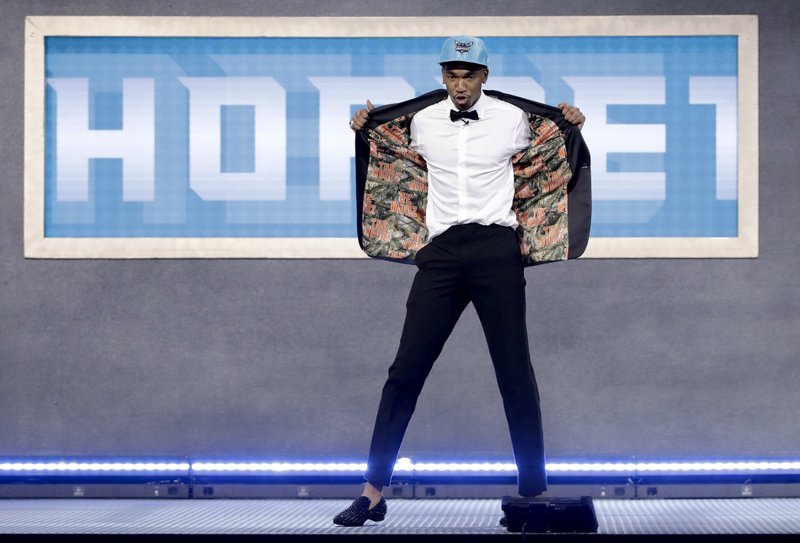 Kentucky's Malik Monk reacts after being selected by the Charlotte Hornets as the 11th pick overall during the NBA basketball draft, Thursday, June 22, 2017, in New York. (AP Photo/Frank Franklin II)

Malik Monk, an Arkansas native who was drafted 11th overall by the NBA's Charlotte Hornets last year, was uninjured after crashing his vehicle in Fayetteville on Sunday morning, records show.

The University of Arkansas Police Department cited Monk on charges of careless driving and no proof of insurance after the single-vehicle wreck, which was reported around 5:45 a.m. at the entrance to Road Hog Park in the 1100 block of West 15th Street. A March 9 court date is set.

A witness told authorities that he heard a loud noise and then "saw that a vehicle had hit the gates" to the park, which sits just southeast of Baum Stadium.

According to a copy of field notes signed by Monk and released Sunday night by police, the Lepanto native wrote he "looked down for a second" when he "just hit a bump."

No one else was listed as being in the red 2002 Lexus Monk was driving, and no injuries were reported. A tow form released by police shows the vehicle's front end and various engine components were damaged.

The field notes indicated Monk was wearing his seat belt. It listed "NA" under insurance company and policy number, and "none" was circled in a section about University of Arkansas affiliation.

Monk starred for three years at Bentonville High School before playing one year at the University of Kentucky.