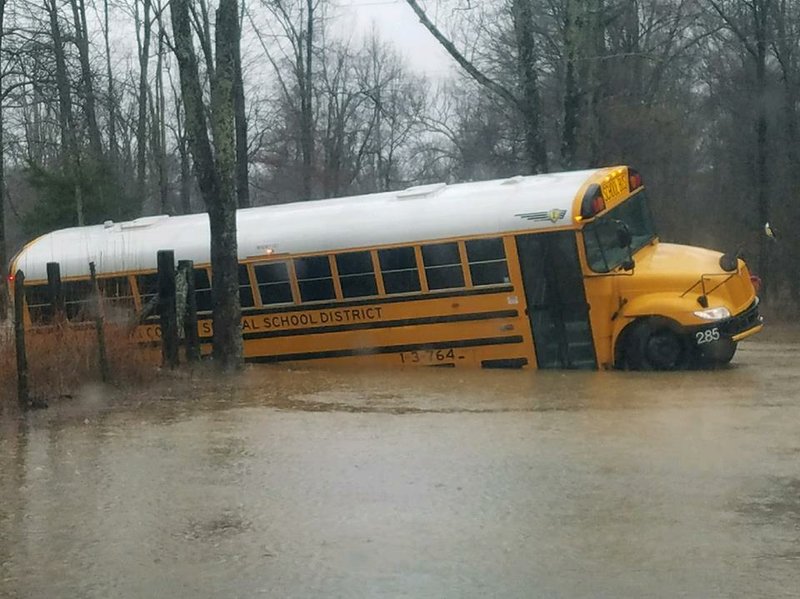 As heavy rains drenched central Arkansas on Wednesday morning, 17 students had to be rescued after a Pulaski County Special School District bus drove off the side of a flooded road and got stuck, authorities said.

The district later said that all of its schools and offices will be closed Thursday due to "widespread flooding" in the county. It will use the day as an Alternate Methods of Instruction day, or a work-from-home day, for students and teachers.

Authorities were called to the intersection of Marche Road and Marche Lateral Road outside the North Little Rock city limits about 8:30 a.m., according to Pulaski County Sheriff's Office spokesman Cody Burk.

The county's Road and Bridge Department responded, rescuing the 17 students and the driver on the Pulaski County Special School District bus, Burk said. No injuries were reported.

A spokeswoman for the district said school buses will arrive early to take home students that live in flooded areas in rural Pulaski County.

Students at Maumelle Middle School and Maumelle High School that live in the flooded area of Marche, near where the bus got stuck, will be picked up at 12:30 p.m., according to a tweet from the district.

Students at Sylvan Hills Middle School and Sylvan Hills High School that live in the flooded area of Jacksonville Cutoff Road will be picked up at 12:30 p.m. as well, district spokeswoman Janet O'Neal said.

Two other schools, Sylvan Hills Freshman Campus and Cato Elementary School, dismissed at noon due to flooding, according to another tweet.