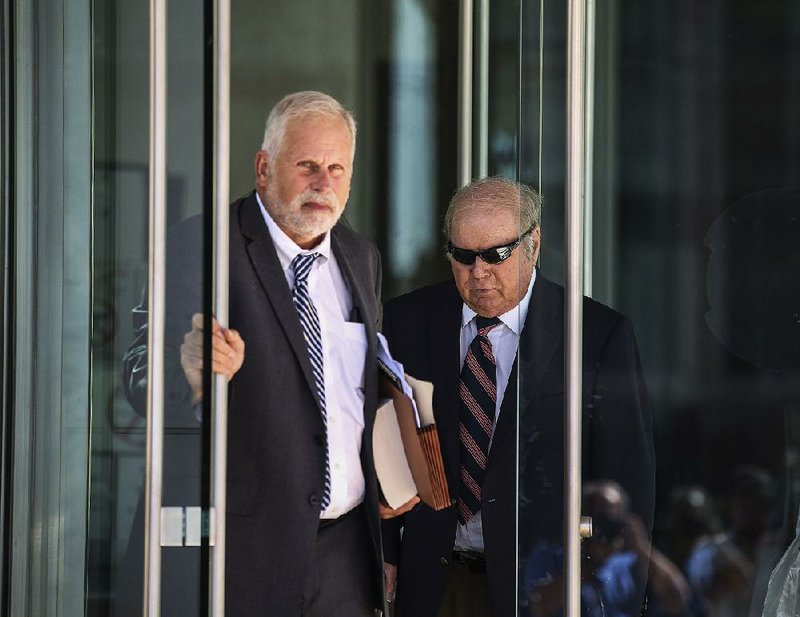 A former Arkansas judge who admitted he granted more lenient sentences to young defendants in exchange for sexual favors has been sentenced to the statutory maximum prison term of five years.

An attorney for Joseph Boeckmann, a former district judge in Cross and St. Francis counties, had characterized him as an "elderly, broken, ailing man" who should be sentenced to home detention.

Prosecutors had agreed not to object to a sentence in the guideline range of 30 to 37 months, but U.S. District Judge Kristine Baker sentenced Boeckmann to the maximum possible.

Two of Boeckmann's victims addressed the court, including one who said he posed nude for photos that Boeckmann took. The other said he was called to Boeckmann's house to conduct community service and was asked there to take off his shirt and bend over and pick up cans while the judge took photos.

A sentencing hearing was underway Wednesday for a former district judge who pleaded guilty to wire fraud and witness tampering after being accused of granting of more lenient sentences to young defendants in exchange for sexual favors.

The hearing for Joseph Boeckmann, 72, of Wynne started around 10 a.m. before U.S. District Judge Kristine Baker in Little Rock.

Two special agents with the FBI testified amid objections from Boeckmann’s defense attorney, Jeff Rosenzweig. The objections included the admissibility of a similar misconduct investigation that occurred in the 1990s when Boeckmann was a deputy prosecutor.

Ahead of Wednesday's sentencing, the U.S. Department of Justice had argued that Boeckmann should be imprisoned for three years and be fined $50,000.

Boeckmann’s attorney, meanwhile, said his client is “an elderly, broken, ailing man” who would be best suited in home detention.

In October, Boeckmann pleaded guilty to the two charges while admitting that he handed out leniency to certain young male defendants in Cross and St. Francis counties in exchange for sexual favors or their agreement to let him photograph them bending over to pick up aluminum cans and litter.

He was indicted in September 2016 on 21 federal charges: eight counts of wire fraud, two counts of witness tampering, one count of bribery and 10 counts of violating the Travel Act.

Authorities said Boeckmann used his position as a judge to obtain personal services, including sexual acts, involving nine males between the ages of 16 and 22.

He required them to participate in "community service" if they wished to have their cases dismissed, according to the indictment.

Check back with Arkansas Online for updates on this story and read Thursday’s Arkansas Democrat-Gazette for full details.