In reversal, King to run for Arkansas Senate 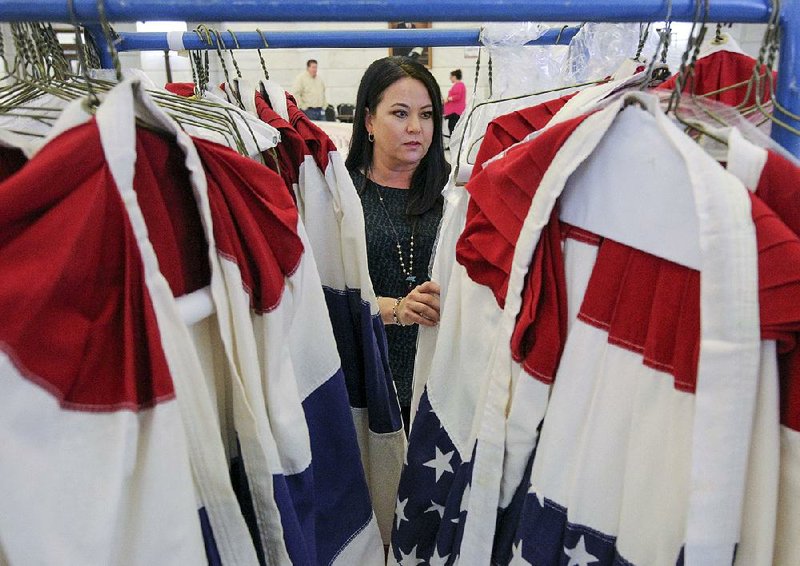 Deputy Secretary of State Kerry Lucas selects bunting Wednesday to decorate the state Capitol rotunda as part of preparations for today’s start of the candidate filing period for state offices. The state primary will be held May 22 and the general election Nov. 6.

State Sen. Bryan King reversed course this week, announcing that he will seek re-election three months after saying his current term would be his last.

In December, the Green Forest Republican cited his family farm and frustration with his party's leaders in Little Rock when discussing his plans to leave the Legislature. But in an interview Wednesday, King said he had renewed hope to "see some things change" in Little Rock, although he declined to elaborate.

He also said he and his brother plan to hire outside help for their cattle and poultry farm.

King has become a legislative firebrand, willing to publicly take leaders of his own party to task, including Gov. Asa Hutchinson. Particularly, King opposes the state's version of Medicaid expansion and the increased spending that has followed it, he said Wednesday. The Medicaid expansion provides health insurance coverage to low-income people.

"I think Sen. King has accomplished a lot over his time in the Legislature even though I don't agree with all of it," Ballinger said. "But in recent years, he's gotten bitter. ... You can be conservative without being angry."

Both candidates suspect that a major campaign issue will be their opposing views of a proposed constitutional amendment to cap attorneys' fees and "non-economic" and punitive damages in lawsuits. The proposal, referred by the Legislature to the November general election ballot, also would shift final rule-making authority of the courts to the Arkansas General Assembly.

Ballinger was a House sponsor of the resolution adopted by both chambers in 2017 that referred the proposal to the ballot. Meanwhile, King opposes the amendment, primarily because of the authority it gives legislators over the courts.

No Democrats have publicly announced for the seat, but Ballinger said he's heard that a Democrat is considering a run. The filing period for state public offices up for election this year begins today and ends March 1. The primary will be May 22 and the general election Nov. 6.

State senators receive a salary of $40,188 a year in addition to per diem and mileage to attend legislative sessions and meetings.


Print Headline: In reversal, King to run for Senate