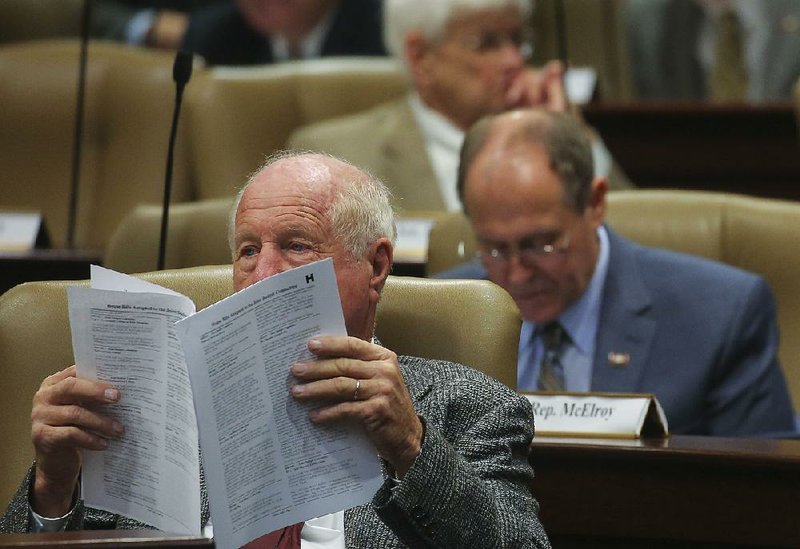 Rep. Kim Hendren, R-Gravette, looks over the details of a House bill being considered during a Joint Budget Committee meeting Wednesday morning.

A proposal that would allow taxpayers with 529 college savings plans to use withdrawals for tuition at an elementary or secondary school cleared the Joint Budget Committee's Special Language Subcommittee on Wednesday.

Sen. Jason Rapert, R-Bigelow, proposed the amendment to House Bill 1122, which is the state treasurer's appropriation bill for fiscal 2019.

The state Department of Finance and Administration projected the proposal would reduce revenue by up to $5.2 million a year, based on the assumption each private-school family took full advantage of the plan.

A taxpayer may take a deduction of up to $5,000 on his Arkansas individual income tax return for contributions to an Arkansas college savings plan or up to $3,000 for contributions to an out-of-state college savings plan, the department said. Previous federal law limited the use of plan funds to higher education expenses. Distributions after Dec. 31, 2017, may include tuition at an elementary or secondary public, private or religious school under the federal Tax Cuts and Jobs Act signed by President Donald Trump.

Rapert said the $5.2 million-a-year cost estimate is "a truly worst case [scenario]. ... [W]e should let the families have the full benefit of what Congress just passed and the president signed into law," he said.

But Tracey Ann Nelson, executive director of the Arkansas Education Association, said the proposal amounts to "a voucher" program that would reduce revenue and use taxpayer dollars for unaccountable private schools and expenses. Rapert said it wasn't "truly" a voucher program.

Afterward, Gov. Asa Hutchinson said in a written statement that "while I've always supported this initiative in concept, I was hoping it would be addressed in bill form, rather than special language, where it could have been debated more comprehensibly as well as the costs associated with it. But it does address something that has a broad public interest."