21 arrested in Little Rock gangs dragnet; family member of ex-Hog McFadden among those charged in case 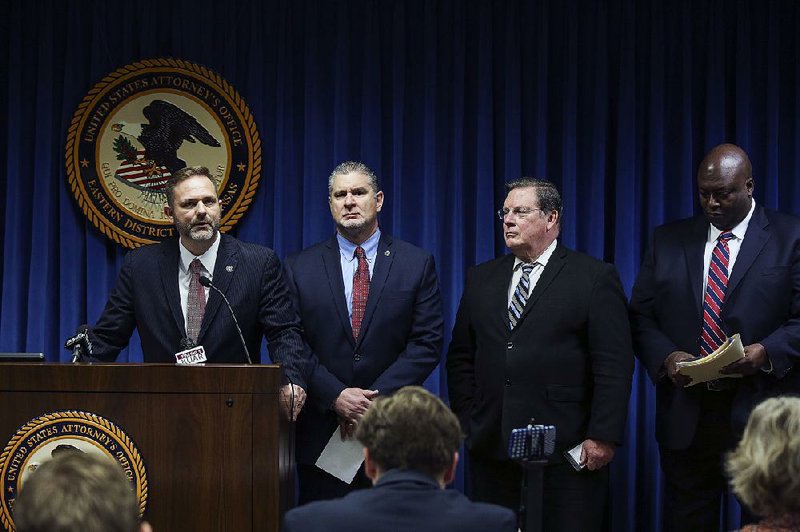 Officials say 21 people were arrested on federal charges Thursday morning in a wide-ranging takedown operation, part of a larger effort to target gangs and violent criminals in Arkansas' capital city.

At a news conference Thursday afternoon, Cody Hiland, the U.S. attorney for the Eastern District of Arkansas, reported that authorities that morning arrested 21 of the 49 defendants listed in two complaints and 13 federal indictments.

"Today's operation is a victory over gun, gang and drug violence," Hiland said. "But I want to make it clear, this is just a start of what the combined resources of these law enforcement agencies can do."

The federal office in Little Rock also reported seizing drugs, firearms and vehicles in the Thursday operation, which Hiland said involved more than 250 agents and officers from agencies across the state. According to the release, authorities seized 21 illegally possessed guns, 9.6 pounds of cocaine, 293 Ecstasy pills and 7.2 ounces of crack cocaine, among other drugs. The office also said agents seized four cars, one motorcycle and about $50,000 "in drug proceeds."

Officials reported at the news conference that nine of the people indicted remained fugitives.

For the first time, authorities also publicly identified two gangs involved in the July shooting at the Power Ultra Lounge in Little Rock, which left 28 people injured and led to the creation of a joint task force focused on gangs and violent crime.

A statement from the U.S. attorney's office in Little Rock said that shooting was precipitated by the rivalry between Real Hustlers Incorporated, a gang formerly known as the Monroe Street Hustlers, and the Wolfe Street Crips, a gang in Little Rock.

Among the 49 charged individuals is Bilal Johns Muhammad, a longtime leader of Real Hustlers, the release says. He is also the half brother of former Razorback and NFL running back Darren McFadden.

Two of Muhammad's sons, identified as Bilal Sean Muhammad and Kain Jordan, were also listed among the 49 defendants, according to the release.

Also indicted is Clifton Thomas, who is identified as a founder of Real Hustlers Incorporated. Thomas was shot six times outside a Little Rock home last summer.

Little Rock saw a violent year in 2017, recording the highest number of homicides in at least a decade. Little Rock police data show that the number of nonfatal shooting victims in the city has increased every year since 2014.

Last year, there were 203 nonfatal shooting victims in Little Rock -- a more than 35 percent increase from the 150 victims logged in 2016, according to local police data. The figure accounted for only the number of shooting victims related to first-degree battery.

According to the U.S. attorney's office, violent crime overall in Little Rock increased about 5.52 percent from 2016 to 2017, including a rise in burglaries, rapes and homicides.

Chris Givens, an assistant U.S. attorney, said 14 defendants were arrested last week in connection with the indictment of Robert Carroll Turpin III. According to the U.S. attorney's office, Turpin headed a drug-trafficking organization, and an investigation revealed that he was distributing methamphetamine, cocaine, heroin and marijuana.

Turpin, according to the release, was also distributing thousands of oxycodone and alprazolam pills in central Arkansas.

"Turpin was found to be importing pharmaceutical drugs from India for illicit distribution, and during the course of the conspiracy more than 150,000 pills were obtained and distributed," according to the release.

At the news conference Thursday, law enforcement officials praised the collaborative nature of the task force, known as the GET Rock task force. The abbreviation stands for Gang Enforcement Team.

"I commend the stellar work of all of those involved in this morning's efforts, and I know this is just the beginning -- there's plenty of work left to do," he said in the release.

It was a statement shared by others.

"If you're a criminal, a violent criminal in central Arkansas, we're coming for you," said Maj. Carl Minden with the Pulaski County sheriff's office.

Pulaski County Prosecuting Attorney Larry Jegley said the operation echoed the government's response to the gang wars of the 1990s, when Little Rock violence gained national attention after the release of the 1994 HBO documentary Gang War: Bangin' In Little Rock.

According to a statement from the U.S. attorney's office, Bilal Johns Muhammad was identified as a longtime leader of Real Hustlers Incorporated, which changed its name from the Monroe Street Hustlers "due to mounting and unwanted attention from" Little Rock police.

Court documents related to the Power Ultra Lounge shooting reveal that witnesses heard an argument and people yelling "Crip" and "Bloods" before the gunfire broke out. An affidavit shows that one shooting witness told police that she heard "someone yell something about 'Monroe' street gang affiliation" just before the shooting began.

According to a confidential law enforcement bulletin obtained last year by the Arkansas Democrat-Gazette, there was a planned "welcome home party" for Bilal Johns Muhammad at the Power Ultra Lounge on April 7, 2017, months before the July 1 shooting.

The Little Rock Police Department bulletin identified Muhammad as a leader of the "Monroe Street Hustlas and Real Hustlerz Inc."

The document said Muhammad had been released from the Arkansas Department of Correction and noted that the welcome-home party would attract "a large number of gang members."

"Extra patrol should be given in the area due to the recent gang-related shootings," the bulletin read.

Hiland declined to specify how members of Real Hustler Incorporated, a local Bloods-affiliate, participated in the Power Ultra Lounge shooting.

The release from his office states that the gang "utilizes" the house at 5108 W. 31st St. in Little Rock as a music studio, but also as a place to distribute oxycodone, marijuana, cocaine and heroin, among other controlled substances.

In addition to Thomas, the statement identified Marvin Collins as a founder of the Real Huslters Incorporated.

Members of the Monroe Steet Hustlers have been tied to several shootings in Little Rock, including the death of 2-year-old Ramiya Reed, who was fatally shot in November of 2016, while riding in the back seat of a vehicle with her mother.

Court documents and the case file on the toddler's death revealed that she was an innocent victim in a dispute between members the Monroe Street Hustlers and the Murder Mafia Gang.