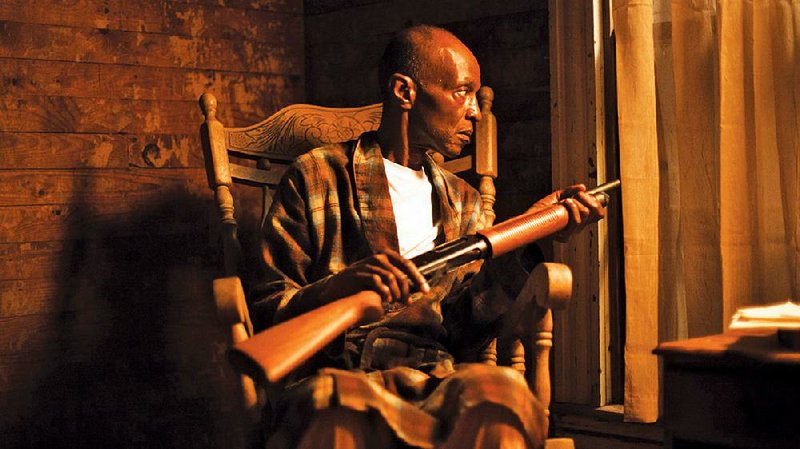 L.B. Williams knows his nephew doesn’t have long to live after wolf-whistling at a white woman in the Oscar-nominated short film My Nephew Emmett.

Probably the most difficult categories on any Oscar pool are the ones for short films. Guessing which one will actually take home a little gold man is frustrating because hardly anyone has had a chance to see these movies before award season. Thankfully, the current crop of Oscar-nominated short documentaries, narrative films and animated films are opening this weekend at the Riverdale 10.

After having watched each of these movies, it's safe to say the competition between full length films isn't as engrossing as the chance to see terrific little flicks that don't get a lot of hype. The three programs are a great way to discover movies that have important things to say and still manage to entertain.

Dear Basketball (5 minutes) This intriguing collaboration between legendary hoopster Kobe Bryant and the gifted Disney animator Glen Keane (Beauty and the Beast, Tarzan) is a brief, but touching love letter from Bryant to the game that has defined him for most of his life. Bryant's narration and Keane's drawings (which look like Leroy Neiman paintings come to life) mesh beautifully. It's hard to imagine another farewell this touching. (4.5/5)

Negative Space (5 minutes) French directors Max Potter and Ru Kuwahata create a stop-motion exploration of how important it is to pack suitcases properly. If the premise sounds a little, um, stuffy, the end result isn't. It's actually an astonishingly affecting examination of how parents can affect our lives even after they're gone. The impact of this film is like watching a long, slow fuse detonating in a spectacular fashion. (4/5)

Lou (7 minutes) It's a given that a Pixar movie is going to be entertaining and visually appealing, but directors Dave Mullins and Dina Murray also address playground bullying in a refreshing and amusing manner. A playground thug named J.J. swipes other kids' possessions. That ends when he makes the mistake of tangling with a strange entity that lives in the lost and found box outside the school (the missing letters on the box give him his name). "Lou" is a hodgepodge of lost sweaters and toys who can outrun J.J. and teach him that other people have feelings, too. This movie played before Cars 3 earlier this year and is more entertaining on a second viewing. It's also intriguing because Lou manages to humble J.J. and build him up at the same time. If only the messes in my closet could do the same for me. (5/5)

Garden Party (7 minutes) This French entry features a clan of giddy frogs who discover that an upscale house is loaded with tasty caviar and other delights they haven't been able to try in nearby ponds. This stuff sure beats flies. Victor Caire and Gabriel Grapperon have adopted a hyper-realistic style that makes it seem as if the hungry and later happy amphibians are devouring the previously forbidden delights. That said, the filmmakers cleverly hint that there's a reason the home is now their exclusive playground. (5/5)

Revolting Rhymes (29 minutes) There are at least three countries (Germany, the United Kingdom and South Africa) credited with the creation of this suitably clever adaptation of Roald Dahl's children's stories, and all should be proud of the end result. Dahl, who's responsible for classics like James and the Giant Peach and Charlie and the Chocolate Factory, retools well-known fairy tales so that readers and now viewers can tell how the Wolf (voiced by Dominic West, The Wire) felt about the outcome of stories like "Little Red Riding Hood" and "The Three Little Pigs." Jakob Schub and Jan Lachauer have not only preserved Dahl's agile wordplay and amusingly macabre sensibilities, but they've also captured the look of the drawings Quentin Blake illustrated them with. West is appropriately suave and sinister, and he gets able support from Rob Brydon (Steve Googan's partner-in-gluttony in The Trip films), Tasmin Grieg, Gemma Chan and Rose Leslie. (5/5)

The program also includes Lost Property Office, Weeds and Achoo, which didn't get nominated and weren't available for viewing in time for deadline.

Three of the shorts included in this year's nominees are based on real incidents. Most have an activist bent, but thankfully the causes behind them are just, and the films themselves are so powerful that the preachiness doesn't get oppressive.

DeKalb Elementary (20 minutes) This short takes on an eerie resonance after last week's mass shooting in Florida. A young man (Bo Mitchell) walks into an elementary school with a high-powered rifle and threatens everyone inside. A quick-thinking receptionist (Cassandra Rice) tries to calm him down before people get hurt or killed. What's intriguing about this short is that neither the gunman nor the receptionist are what they initially appear to be. The gunman is clearly more tormented than violent, and the receptionist struggles to remain composed even though the situation is undeniably terrifying. Writer-director Reed Van Dyk gives both actors remarkably meaty if not flashy roles and avoids the temptation for long monologues, which would kill any narrative tension. (4/5)

My Nephew Emmett (20 minutes) While the lynching of teenager Emmet Till (Joshua Wright) is all-too-familiar, writer-director Kevin Wilson Jr. discovers a fresh angle on the story by telling it from the point-of-view of his uncle, Maurice Wright (Dorian Davis). When the older man hears that his nephew has whistled at a white woman, he knows the poor lad isn't long for this world and mulls over how to deal with the inevitable consequences. Davis' commanding performance anchors the film, and he and Wright bear an uncanny resemblance to their real-life counterparts. The bigots who eventually come for Emmet are expectedly threatening, but Wilson depicts them with just enough nuance to prevent them from becoming caricatures. (5/5)

Watu Wote/All of Us (22 minutes) Set along the border between Kenya and Somalia, a young Christian woman (Adeline Wairimu) is trying to escape the tensions with local Muslims in the city where she lives. She takes a bus out of town and has some tense words with a Muslim teacher named Salah Farah (Abdiwali Farran) who thinks she's not being considerate with some of the other passengers. When a group of Islamic terrorists hold up the van, he and the other Muslim passengers quickly hide the Christians in their midst so the terrorists won't kill them. The Koran says that anyone who saves an individual saves all of humankind. It's fitting that a teacher knows the book better than the guys with the guns. German director Katja Benrath effortlessly builds tension and honors Farah without having her film descending into a sermon. (5/5)

The Silent Child (20 minutes) A seemingly ideal British family treats their youngest daughter Libby (Maisey Sly) as an outsider because she can barely hear. To get her ready for school, her parents (Rachel Fielding and Philip York) recruit a tutor named Joanne (screenwriter Rachel Shenton). The girl's parents are adamant that she learn lip reading and can't be bothered to learn sign language, as a result, Joanne winds up being the only person the child can get close to. Shenton is an advocate for the deaf, but she also gives Libby's parents just enough depth to explain why they aren't spending enough time with their daughter. (5/5)

The Eleven O'Clock (13 minutes) Not all of the shorts deal with sobering material. This brief comedy offers a welcome break in the program. An Australian psychiatrist (Josh Lawson, who also wrote the script) has an unusual patient. Nathan Klien (Damon Harriman) thinks that he's actually the doctor and starts doing word associations and other drills the physician himself should be doing. It's a straightforward, if amusing, sketch, but Lawson and director Derin Seale sprinkle in just enough clues to reveal there might be something else at work. (4/5)

Edith + Eddie (29 minutes) A contented married couple in their mid-90s living in Alexandria, Va., find their union endangered when some of her children want to take custody of her and sell or rent her home. Edith has dementia, but the children pushing for the move live in Florida, and the court appointed guardian hasn't even met her. The title characters are remarkably telegenic, so it's difficult to watch them suffer as people who apparently don't have their best interests at heart take over their lives. It probably doesn't help that Edith is black and that Eddie is white and that her daughter who has been taking care of them has been ignored through the entire process. Edith + Eddie is tricky to get through, but it's as engrossing as it is heartbreaking. (4/5)

Heaven Is a Traffic Jam on the 405 (40 minutes) The title for this look at artist Mindy Alper sounds like an oxymoron. I've been stuck on Los Angeles' most infamously immobile freeway, and it didn't seem like paradise to me. As director Frank Stiefel lets viewers into her life, the title makes sense. Looking into cars stuck on the road allows her to peer into the lives of others when interacting in person challenges her. Alper has survived parents who loved her but had difficulty expressing their affection and a lifelong struggle with mental illness. Her art, including the doodles she drew as a kid, is astonishingly sensitive, and Stiefel uses animation and optical effects to put viewers into Alper's head. (5/5)

Heroin(e) (39 minutes) Director Elaine McMillion Shelton documents the horrifying toll the opiate crisis has inflicted on Huntington, W.Va., and the women who are doing their best to confront the problem and help addicts get clean. They include Jan Rader, the first female fire chief in the state's history and Necia Freeman from Brown Bag Ministries who tries to help addicts -- who've turned to prostitution -- kick the habit that has led them to live on the streets. Judge Patricia Keller steals the show because she firmly challenges the addicts in her court, but she's astonishingly compassionate and funny in the way she handles her difficult responsibilities. McMillion Shelton doesn't sugarcoat the severity of the crisis, but watching these women addressing it is oddly hopeful and entertaining. (5/5)

Knife Skills (40 minutes) Thomas Lennon captures the opening of the new Cleveland restaurant Edwin's, which serves refined French cuisine. What's unusual about the eatery is that its proprietor and its labor force are convicted felons. Under the tutelage of an actual Gallic chef, the former prisoners prove to be remarkably able cooks and manage to get past some of the problems that led them to prison. Lennon, not to be confused with the comedian behind Reno 911!, follows trainees who succeed as well as the ones who have trouble making the cut. Knife Skills is inspiring without being sappy. (4/5)

Traffic Stop (31 minutes) Kate Davis recounts a 2015 traffic stop in Austin, Texas, where white Officer Bryan Richter slammed teacher Breaion King to the ground after a routine traffic stop. The documentary includes actual dash cam footage and features current footage of what has happened since then. Davis avoids making a shallow diatribe from its volatile subject. (4.5/5)