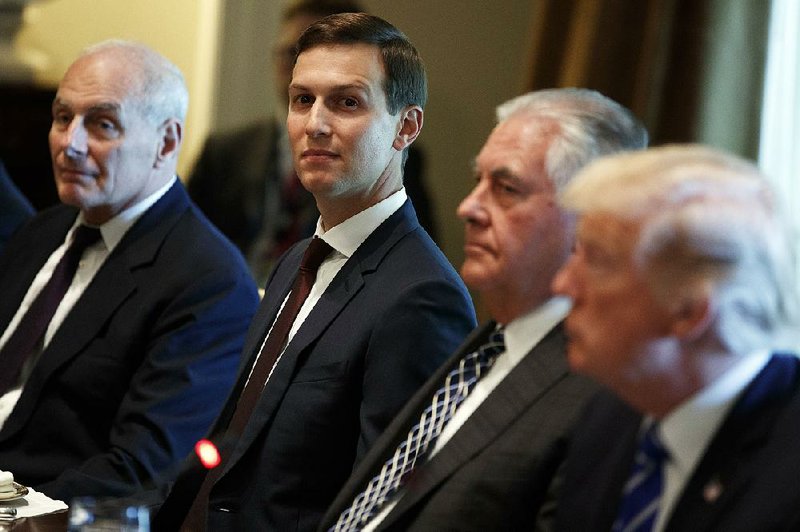 The Feb. 9 phone call from Deputy Attorney General Rod Rosenstein to White House Counsel Don McGahn came as public scrutiny mounted over the number of administration officials without final security clearances. Most prominent among them is Kushner, President Donald Trump's son-in-law, who has had access to some of the nation's most sensitive material for the past year while waiting for his background investigation to be completed.

A week after the call from Rosenstein, White House Chief of Staff John Kelly announced that staff members whose clearances have not been finalized will no longer be able to view top-secret information -- meaning that Kushner stood to lose his status as early as Friday.

As president, Trump can grant Kushner a high-level security clearance even if his background investigation continues to drag on. But Trump said Friday that he would leave that decision to Kelly.

"I will let Gen. Kelly make that decision, and he's going to do what's right for the country and I have no doubt he'll make the right decision," Trump said during a joint news conference with Australian Prime Minister Malcolm Turnbull, where he addressed the security clearance issue for the first time.

Kelly, in a memo released last week, had set a Friday deadline for halting access to top-secret information for those whose applications have been pending since June 1 or earlier. Some officials are expected to leave their posts as a result, while others will continue working with reduced -- or no -- access to classified information.

A White House official said staff members affected by the memo were being notified individually Friday. Those with temporary "top secret" or higher clearances are expected to be bumped down to temporary "secret" clearances, which provide more limited access.

At the news conference, the president heaped praise on Kushner, calling him a master deal-maker and saying he'd "done an outstanding job." He noted Kushner does not take a salary, and complained he'd been treated "very unfairly" by the press.

Trump also complained he'd inherited a "broken" background-check system in which it can take "months and months and months" for full security clearance to be granted, even for people without complicated financial holdings.

In his phone conversation with McGahn, Rosenstein intended to give an update on the status of Kushner's background investigation. He did not specify the source of the information that officials were examining, the three people said.

Justice Department officials said Rosenstein did not provide any details to the White House about the matters that need to be investigated relating to Kushner.

"The Deputy Attorney General has not referenced to the White House any specific concerns relating to this individual's security clearance process," spokesman Sarah Isgur Flores said in a statement.

A White House spokesman declined to comment on the status of Kushner's clearance or on information relayed by Rosenstein to McGahn.

Security-clearance experts said it is rare to have such a high level of interim clearance for such a long period of time. Typically, senior officials do not get interim access to top-secret and sensitive compartmented material for more than three months, experts said.

The day before Rosenstein's call to McGahn, The Washington Post reported that Kushner was among dozens of White House personnel who were relying on interim clearances while their FBI background investigations were pending.

White House officials have complained that they have had trouble getting information from the Justice Department and FBI about the status of delayed clearances, including Kushner's. People familiar with the Feb. 9 call said Rosenstein was returning a White House phone call seeking guidance on the status of his background investigation, among those of others.

Rosenstein intended to speak to Kelly, but the chief of staff was not immediately available, so he ended up talking to McGahn instead, according to three people familiar with the call.

In the call, Rosenstein did not say whether the information that had come to the attention of the Justice Department was learned by the FBI in its standard background clearance investigation of White House staff members. Rosenstein also oversees the investigation by special counsel Robert Mueller, who has scrutinized Kushner's contacts with foreign officials and business dealings as he examines Russia's interference in the 2016 election.

There are conflicting accounts about whether Rosenstein discussed with McGahn the significance of the information and its possible impact on Kushner's clearance. Two people said the deputy attorney general told McGahn the Justice Department had obtained important new information, suggesting it could be an obstacle to his clearance process. Two others said Rosenstein did not discuss the nature of the ongoing investigation.

"It seems to me that he should have restricted access to highly classified material until the resolution of those issues," Bauer said.

As someone who meets regularly with foreign officials and reads classified intelligence, Kushner would typically have a fast-tracked background investigation, security-clearance experts said.

During the past six months, McGahn privately discussed the slow pace of Kushner's background investigation with other senior aides, including with Kelly in the fall, according to a top administration official. Kelly expressed frustration with Kushner's access to classified material on an extended interim clearance, according to the official. But McGahn and Kelly decided to wait for the FBI to complete its background investigation and took no action at the time to change his access.

Their wait-and-see mode ended last week, when Kelly issued a new policy that would block staff members with interim clearances from receiving top-secret information as of Friday.

The changes were prompted by intense scrutiny that has followed domestic-abuse allegations against Rob Porter, the president's former staff secretary, who also was working under an interim top-secret clearance.

In a statement about Kushner issued earlier this week, Kelly said he had "full confidence in his ability to continue performing his duties in his foreign-policy portfolio including overseeing our Israeli-Palestinian peace effort and serving as an integral part of our relationship with Mexico."

Much, but not all, of Kushner's work on those issues is handled at the lower secret or confidential clearance levels, which are not affected by Kelly's memo, a White House official said.

Inside the White House, officials have discussed concerns that the delay in Kushner's clearance is partly a result of repeated updates he made to a form detailing his contacts with foreign officials.

He filed three amendments last year to the questionnaire, after failing to fully disclose contacts reaching back several years. Kushner has said the omissions were inadvertent errors.

Investigators scrutinize those activities to determine whether a person could be subject to influence or blackmail by a foreign government and can be trusted to guard classified information.

Ordinarily, security-clearance experts said, the failure to completely disclose all contacts would jeopardize an applicant's chances of obtaining final clearance.

In addition, Kushner's actions during the transition have been noted in the guilty plea of former Trump national security adviser Michael Flynn, who admitted he lied to the FBI about contacts with then-Russian Ambassador Sergey Kislyak. Prosecutors said Flynn was acting in consultation with a senior Trump transition official, whom people familiar with the matter have identified as Kushner.

Information for this article was contributed by Carol D. Leonnig, Robert Costa, Josh Dawsey, Shane Harris, Sari Horwitz, Ellen Nakashima and Julie Tate of The Washington Post; and by Jill Colvin and Zeke Miller of The Associated Press.