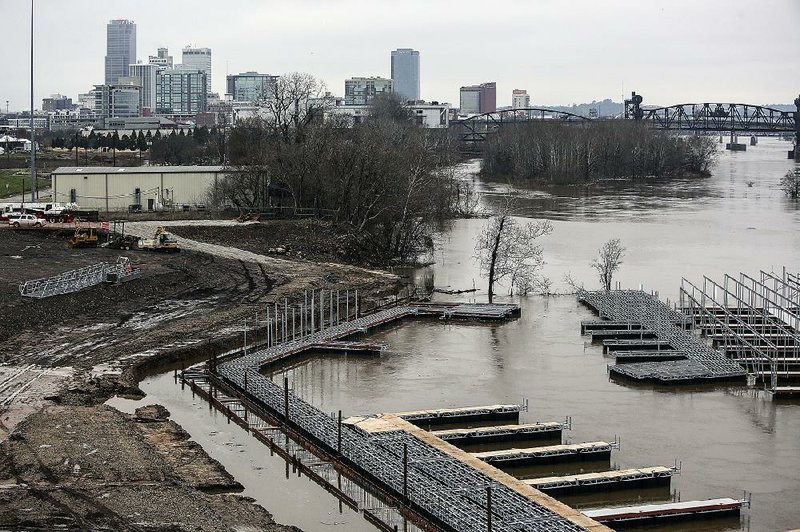 The bank of the Arkansas River in downtown Little Rock, photographed in February 2018, is the future home of Rock City Yacht Club. The project has been years in the making. ( Mitchell PE Masilun)

If John Burkhalter had been told 14 years ago what he would go through before he could turn dirt on the first phase of what will be a $60 million marina development on the Little Rock bank of the Arkansas River, he said his response would have been, "No, thanks."

"It has been a long journey," Burkhalter said.

But boaters on the river will be able to find safe harbor on their own journeys at the Rock City Yacht Club as soon as this summer, thanks, Burkhalter said, to a "finish what you start" ethos that his parents, Frank and Loyce Ann Burkhalter, instilled in him as a boy.

The first phase of what Burkhalter said will be a "state of the art" marina includes 154 of the eventual 258 boat slips, a public-access boat ramp and park, fueling station, restrooms and a dock store.

Construction is expected to begin this summer on 176 luxury apartments along with additional slips and a restaurant. 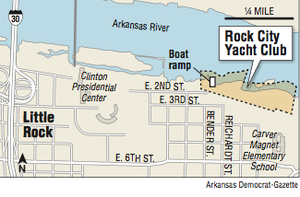 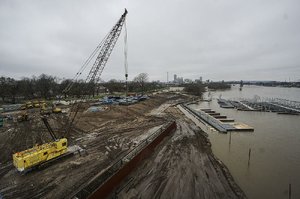 Photo by Mitchell PE Masilun
Construction has begun at the site of the Rock City Yacht Club, a marina on the Arkansas River in downtown Little Rock. John Burkhalter is the developer.

Burkhalter calls it a landmark public-private partnership that will allow the state's capital city to reconnect to its roots as a river port and provide better access to the river for residents who now often visit the state's lakes for their boating activities.

"We have lost sight of what this river means to us," he said.

He first saw the property in 2004 when he reluctantly accepted an invitation from a friend who owned the land, the late Greg Gladden of Cabot, to give it a look. He described gingerly walking out into the cane growing on the property and seeing then what his friend saw in it: perhaps the only spot in the city where a marina could be built.

Gladden tried without success for a couple of years to develop the property but then sold it to Burkhalter in 2006. It has been a long 12 years in which Burkhalter said he has invested millions of dollars into the project.

Few projects come without some "hair" on them, a reference to difficulties land can present to a developer, be it challenges from regulators, Mother Nature or the ownership.

"This had hair all over it," Burkhalter said.

Burkhalter, 61, an engineer, had turned to real estate development after he sold his technology business in 1998. His portfolio includes four luxury apartment complexes under the Fountaine Bleau brand with a fourth soon to be announced.

It took six years to obtain the U.S. Army Corps of Engineers permit required by the federal Clean Water Act, an effort that included enlisting the aid of Sen. John Boozman, R-Ark., and former U.S. Sen. Mark Pryor, D-Ark., and a trip to Washington, D.C.

"It's difficult to get permits," Burkhalter said. "I'm not saying it's because the answer with the government is 'no.' They have to totally understand the process and you have to be pushing from every angle.

A year later, Burkhalter reached a lease agreement with the city. He obtained a grading permit from the city in 2015.

Burkhalter had to delay construction until last summer when he finally obtained a long-sought grant from the Arkansas Game and Fish Commission to help build a public boat ramp that he said is integral to the project. The marina would have been ineligible for the grant if work had started before the grant was awarded.

Burkhalter said the marina will be accessible not only to traveling boaters but to the larger community, whose idea of boating means a drive to Lake Ouachita or Greers Ferry Lake for the weekend. He plans to offer rental boats for people who don't own one.

He took advantage of federal grants designed to encourage boating opportunities and the development of the infrastructure to support those opportunities.

"When you leave the Mississippi [River], there's no place to stop," Burkhalter said. The grants "go to develop waterways to use boats over 26 feet in length." Boats that big can't be hauled around on a trailer, he said.

He matched a $1 million grant with $3.2 million of his own money to build 36 transient slips and associated infrastructure, according to Tom Jones, a senior environmental health specialist for the Arkansas Department of Health, which manages the federal marine grants in the state.

About 4 acres of the 15 acres belongs to the city, which designated it as parkland.

"Boating has always been a big part of my life," he said. "I had visions for this park from the beginning. I have a vision of what this park should symbolize.

"I wanted it to encourage children to learn how to boat, to sail, to tie knots, to do the things I grew up doing -- the tools my parents put in my tool sack for me allowed me to be successful."

Most parks, even if they are alongside a body of water, have picnic tables and pedestrian and bicycle trails. "But where can you walk out on piers, can you go to docks, can you go to a restaurant?" Burkhalter said.

The public access boat ramp was an important piece, too.

Once completed, he predicts the marina's permanent slips will go fast.

He might be right if his daughters and their friends are any indication.

His two daughters, Johnna Kay and Anna Grace, have spent many weekends on Lake Ouachita, where Burkhalter co-owns a marina. They expressed skepticism when he recently tried to enlist them and their friends recently to take photographs to be used in promotional materials for the marina at area boat shows.

He responded: "Am I going to have to rent some kids to go down here and take these photographs?"

"When I got them down here, that's when they said, 'I don't know if we're going back to Ouachita, Daddy.' A kid tells it like it is."