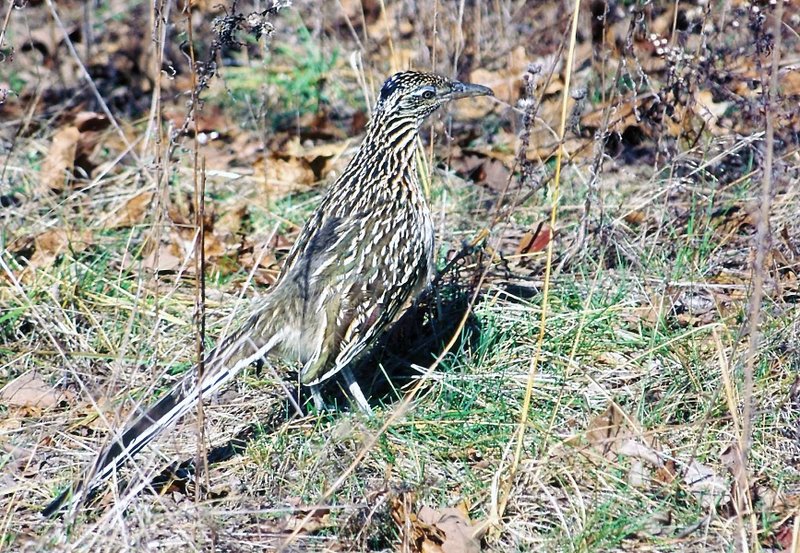 Keith Sutton photographed this greater roadrunner in a friend’s yard in Flippin. Although often thought of as desert birds, roadrunners are at home in The Natural State as well.

Have you ever seen a roadrunner in Arkansas?

Many of you will say no, but the greater roadrunner, as it is formally known, lives throughout much of The Natural State, from the edges of Ozark Mountain woodlands to the bayou bottoms of the Delta. Watch closely as you travel, and chances are good you might see this relentless bundle of energy zipping along on the ground, chasing lizards, insects and small snakes.

In the old days, the cowboys were amused by the bird’s habit of racing ahead of their horses, and they gave him his name — roadrunner. The Mexicans of Sonora call him affectionately paisano, or countryman.

The roadrunner once lived only in the desert Southwest and Mexico. During the 20th century, however, the bird’s range expanded north and east in California, Kansas and Oklahoma and across the Ozark Mountains into the Mississippi River basin. Biologists believe that land clearing, overgrazing and a later reinvasion of scrub habitat allowed the eastern invasion of the roadrunner.

The quickness of the roadrunner’s range expansion in Arkansas is testimony to the bird’s amazing adaptability. This ground cuckoo of Southwestern deserts and grasslands was first reported from the southwest corner of Arkansas in 1936, and by the 1940s, there were records of the bird in the central part of the state. During the 1960s, roadrunners advanced across the Ozarks to the flat agricultural lands beyond. And by the early 1970s, the species was reported in several locations in the state’s eastern lowlands, several hundred miles from the point where the bird was first documented in Arkansas.

Unlike other members of the cuckoo family, roadrunners seldom fly. They sometimes glide short distances or leap from the ground to take insects on the wing, but by and large, they’re runners. Long, strong legs allow them to race along at speeds of 15 mph or more. They use their foot-long tail as a combination rudder and flap, swiveling it to change course or raising it upright in order to stop.

Their appetite is enormous. They’ll eat almost anything that moves. Insects, scorpions, centipedes, spiders, toads, lizards, small snakes, small birds and eggs, mice, young ground squirrels, young rabbits, young bats fallen from cave ceilings, road carrion and cactus fruits are just a few items on the roadrunner’s menu. Some say the blue skin patch around the bird’s eye is attractive to certain species of hummingbirds, thus enabling the roadrunner to snatch these hovering little nectar-eaters out of the sky.

Food items often play an important part in roadrunner courtship. In early spring, roadrunner pairs reaffirm their bond through courting and mating rituals. A male dashes close behind a female with a tempting lizard or snake dangling from his bill. He wags his cocked tail from side to side and occasionally springs into the air and clumsily hovers to keep her attention. If the female accepts the morsel instead of running away, the pair usually mate.

Like other unusual animals, roadrunners are the center of many legends. There’s no doubt they sometimes kill and eat rattlesnakes, but old-timers insist that they first surround the snake with a circle of cactus spines or small stones so the snake cannot get away. Suspiciously, this remarkable performance seems never to be witnessed by anyone with a professional interest in natural history, and it’s usually the friend of a friend who was on the spot.

In some ways, the truth about roadrunners is no less astounding than the myths surrounding them. Consider, for example, the behavior I was once fortunate enough to observe in the yard of my friend Cliff, who lived in the Arkansas

Ozarks. Cliff often told me stories about the crazy antics of a roadrunner whose home range overlapped my friend’s property. Sometimes Cliff would see the bird fighting its reflection in the windows of Cliff’s home or the hubcaps and mirrors of his vehicles. Often the bird perched on a window sill, looking at the members of Cliff’s family, who were looking at it.

“It’s a very tame bird,” Cliff said. “You can walk very close to it. You should come and take some photos.”

I decided to do just that, and early on the first morning of my visit, Cliff and I went into his yard to look for the roadrunner. We found it sitting on the ground not far from the house, with its wings spread and its feathers ruffled out. The morning sun illuminated the patch of ground where the bird was crouched, and a big patch of black skin on the roadrunner’s back was clearly visible. We walked very close to the bird without it showing any sign of disturbance. It appeared to me, from the disheveled look of its feathers, that perhaps some animal had tried to attack it, and it was immobile as a result of its injuries.

“Actually, it’s just sunning itself,” Cliff said. “It does that every day. When the air warms up, it’ll start racing around just like a roadrunner is supposed to do. Just wait and see.”

Sure enough, after about 30 minutes in the sun, the roadrunner smoothed its feathers and began chasing insects and small reptiles in the yard.

I learned later that sunning in this way enables roadrunners to regulate their body temperature. Their normal temperature is 101 degrees F, but during a cold night, this may drop as much as seven degrees below normal with no ill effects. Then, starting at sunrise, the bird turns its back to the sun, lifts the feathers of the lower neck and upper back and holds its wings out. This exposes dark patches of skin that act as solar panels, heating the bird’s blood and saving energy at a rate of about 550 calories per hour for as long as it takes to raise the body temperature back to normal.

The roadrunner’s call is unusual, too. In The What and the Why of Desert Country,

published in 1971, naturalist and writer Joseph Wood Krutch tried to describe it. “The sound which he makes is like nothing on earth, least of all like a bird,” he wrote. “One writer describes it as a sort of modified Bronx cheer, which is right enough since it seems to be made by the raucous expelling of air accompanied by the rapid gnashing of the bill — if a bill can be gnashed. Like the bird himself, the sound is derisive, irascible, ribald, threatening, and highly self-confident.”

I couldn’t describe it better.

Nor could I do better than Mr. Krutch in describing the reason people tend to love the roadrunner. Borrowing from his words again:

There is “something indescribably comic about him,” he writes, “and he illustrates the rule that comic rascals have a way of engaging the affection of even the virtuous. Nearly everybody is curiously cheered by the sight of a road runner.”