Greenbrier Citizen of the Year wants to make community flourish 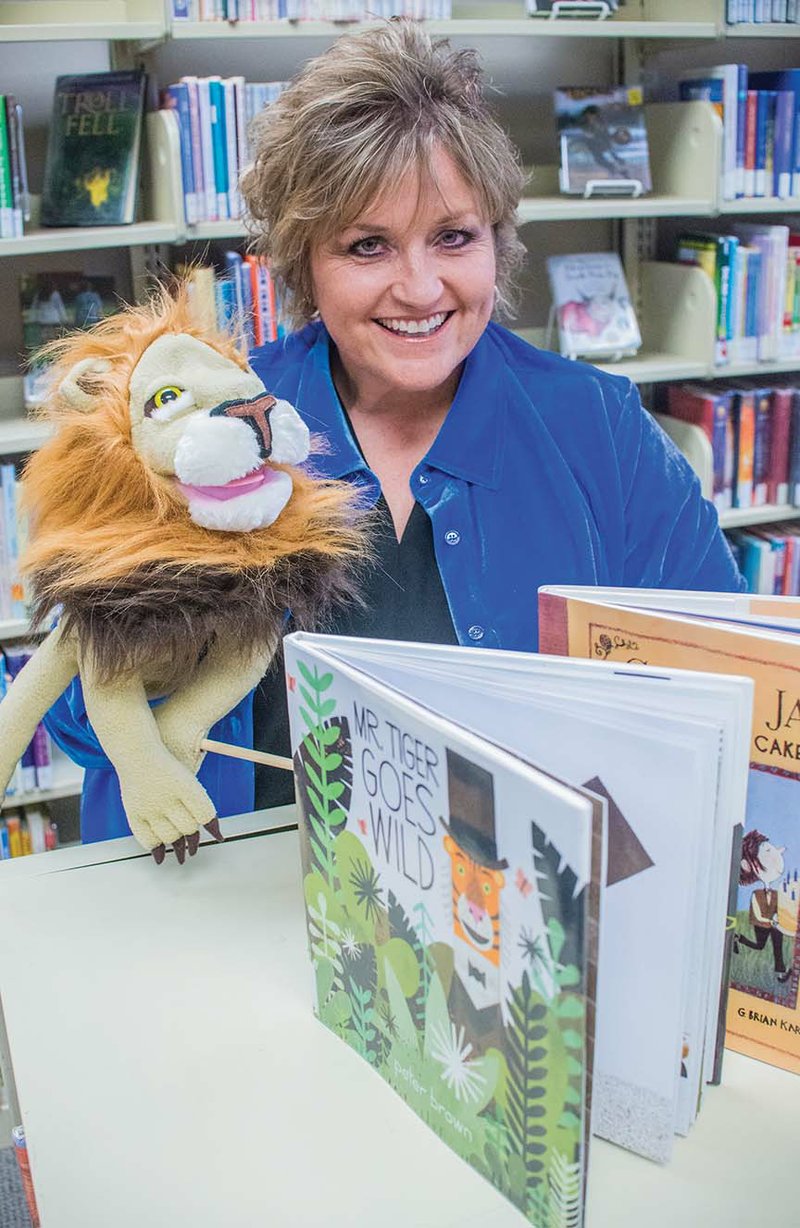 Greenbrier Citizen of the Year Kim Tyler said of all her many volunteer activities, reading to children at the Faulkner County Library’s Greenbrier branch is her favorite. Tyler, a former schoolteacher, helps develop land and manages rental properties for Tyler Land Development, owned by her parents.

When Kim Tyler worked in education in Alaska, school board members honored her with a nickname that meant “fire.”

Now she’s been honored for being on fire for her hometown. Tyler was named Citizen of the Year by the Greenbrier Area Chamber of Commerce.

“It hasn’t really sunk in; it’s surreal,” she said. “I was overwhelmed and honored, pleased that the community that I have always been a member of — I think back of all the people who had a part of investing in me — I feel like I’ve officially gotten their stamp of approval. I know it’s chamber members who vote on this, but it’s like your community is giving you two thumbs up.”

Tyler, a former third-grade teacher in Greenbrier, is self-employed. She worked for years for Tyler Surveying

and Mapping, started in 1968 by her parents, Bill and Cathy Tyler of Greenbrier. Kim Tyler’s brother, Tim, bought the business in 1997, and it was Tim Tyler Surveying and Mapping. He now owns and operates the business, called the Tyler Group Inc., which has expanded.

“Growing up, that’s all I did was surveying,” she said. “In the summers, I was on a survey crew. I carried a plumb bob (a weight); I was on dad’s plumb-bob mob,” she said, laughing. “In 1982, we surveyed access roads going into recently flooded Brewer Lake. That was one of many, many pieces of property I did. I remember that because it was very hot.”

She did clerical work inside in the air-conditioning, too, typing surveys and property descriptions.

“In the summer, anytime I had a spare moment, I was working on rental houses for [my parents]. I was basically flipping houses before flipping became hard work,” she said.

She bought her first house when she was 18 and started remodeling it, and another one at 21.

“That’s what my folks did, so that came natural to me,” Tyler said. “They never said I couldn’t do something. They just said, ‘Go do it.’ If I didn’t know how, I figured it out. You couldn’t Google it; that’s for sure. It was common sense and being resourceful.”

Although it would have been easier to just join the family business, Tyler had always loved children and teaching. At 15, she started teaching Sunday School and playing the piano in church.

She earned a degree in early childhood education and a master’s degree in educational leadership from the University of Central Arkansas in Conway.

She taught third grade for seven years in the Greenbrier School District and loved it.

Tyler still spent her summers helping develop subdivisions, “and people kept hitting me up to help me with their houses,” she said.

Tyler said she had the experience and “a woman’s touch.” She had a knack for designing “things that make a house work better, finding out what people want. Not to say women are better at it, but it worked for me. Plus, I already knew a lot about construction.”

Then she was contacted by the Lower Yukon School District in Alaska to take an administrative position as federal programs director, which included staff development, reading excellence and instructional technology. It was a lot of grant writing and grant administration.

“I had traveled a lot around the world, but I had not been to Alaska. I immediately had to get acclimated to the Yup’ik culture. I learned what their culture was like and respected it. I worked with teachers mainly from the lower 48 and local ones, too, and paraprofessionals in migrant education,” she said.

“You become part of that community. They said I talked like Dolly Parton because I had a Southern accent,” Tyler said.

Members of the regional school board gave her a Yup’ik name “that I can’t pronounce” that means fire.

“I traveled to 11 schools all the time, by snow machine or plane,” she said.

She moved back to Greenbrier in 2005 because her sister, Sarah Lewis, started her family, “and I wanted to be part of their lives,” Tyler said.

“I think Skype had just started, but there was no cellphone service out there [in Alaska],” she said.

“I came back, and I built a couple of houses and just waited on God to present another opportunity, and I started working with Tim doing project management,” she said.

“Surveying has changed; it’s not just drawing a subdivision. I worked a lot with municipalities finding out what you needed to have to get something built,” Tyler said. “You used to get property on Friday and get a building permit on Monday, but that’s changed. Development reviews are required.

“I love working with the city of Conway. … Mainly, that’s what I did, working with developers on what they needed.”

Throughout her life, she’s been involved in community organizations.

“She’s a volunteer beyond belief; she volunteers everywhere,” Tim Tyler said. “I’ve always been proud of her.” He was named Volunteer of the Year 2016 in by the Greenbrier Area Chamber of Commerce.

She is a board member and former president of the Conway Noon Lions Club, which also services Greenbrier. Kim Tyler said she is a certified vision screener and conducts vision screenings at Faulkner County schools.

“We encourage [students] to go to eye doctors,” she said.

“The biggest thing I do is the Faulkner County Library Greenbrier branch, reading on Wednesdays, and do puppets and things for early childhood development. I teach with a wonderful crew,” she said.

She is also the lead teacher for Route 434, a program for third- and fourth-graders at Antioch Baptist Church in Conway.

“It’s amazing to get to work with these children,” she said.

Tyler was appointed by Greenbrier Mayor Sammy Hartwick to the Greenbrier Natural Resources Advisory Board, of which she serves as chairwoman. It communicates with the Greenbrier City Council and Greenbrier Parks and Recreation about ideas to enhance the community.

“Kim is probably the best advertisement for the city of Greenbrier we can put out there because she’s so passionate about Greenbrier,” Hartwick said. “She always talks about bleeding blue, bleeding blue. I couldn’t have picked a better person to be on that board.”

Tyler said she enjoys working on the advisory board.

“The biggest thing we’re working on is the proposed Matthews Park on land purchased in the heart of Greenbrier by the city,” Tyler said. Located at 42 S. Broadway Ave., it was co-owned by

Martha Garrett of Texas, whose father, the late Percy Matthews, was a former Greenbrier mayor.

Proceeds from a half-cent sales tax approved in February by voters will help fund the park, she said, and she helped work to get the sales tax passed.

“It was a lot of work behind the scenes. It will fund that [park] and a much-needed upgrade of the fire station,” she said. She said her brother, who is now chief, has served on the volunteer fire department for 33 years.

“[My siblings and I have] always been encouraged to do things for others — faith, family and community,” she said. “If I can do something to help my community flourish, or my county — I love my county — I will. I love to say ‘Faulkner Forever’ on my closings in emails because that’s the way I feel.”

Tyler will be honored March 1 at the Greenbrier Area Chamber of Commerce banquet in the Greenbrier Junior High School Cafetorium. Verna Higgins will receive the Volunteer of the Year Award, and Andie Finley has been named Student of the Year.

Tyler said she is humbled by the honor.

“I’m like , ‘Oh, wow.’ This is something you do anyway; you do take part. You do what you can to encourage and build others up and make your place the best it can be so the youth will carry on that,” she said. “And we’ve got to pass that torch. … You teach the young ones, you invest in them, and you do what you can to transfer those skills. For me, I want the best place possible for my sister’s kids and my brothers’ kids and all the kids [whose lives] I’ve been a part of — just this whole community. I want the best quality of life they can have and for them to enjoy it as much as I have.”

Her hope is that they’ll be on fire for the city, too.