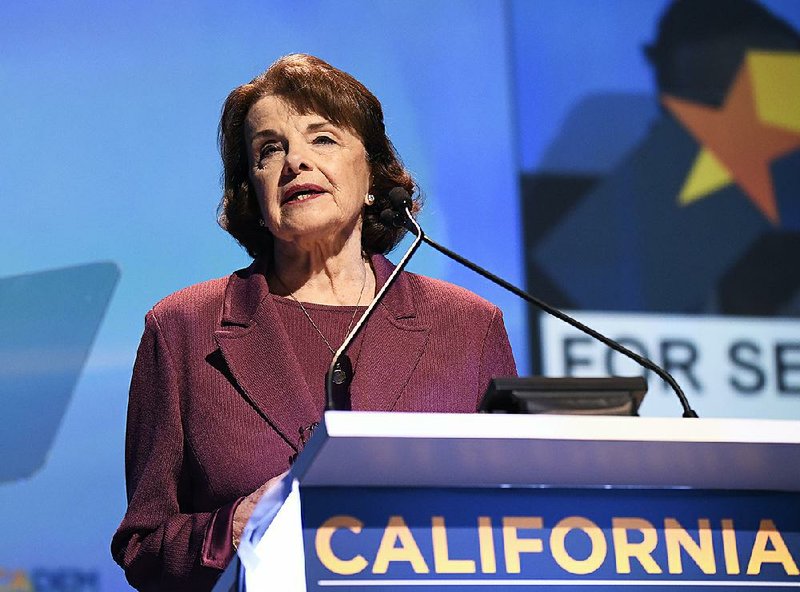 That means neither candidate will get the party's seal of approval or extra campaign cash leading into the June primary.

With Democrats still licking their wounds from the 2016 election, some of the party's biggest stars, including U.S. Sen. Kamala Harris and U.S. Rep. Maxine Waters, urged unity ahead of the midterm elections. They reminded more than 3,000 activists gathered this weekend that President Donald Trump is their common enemy.

Democratic activists were more eager to back de Leon, who is touting himself as a fresh face with stronger progressive credentials, particularly on immigration.

Though party activists rebuked Feinstein, she has millions of dollars to run a successful campaign and polling has shown she enjoys wide support among Democratic voters and independents, a critical piece of the electorate in a race without a Republican.

The top-two primary system in heavily Democratic California allows the two highest vote-getters to advance to the general election regardless of party identification.

It's the first time Feinstein, 84, failed to win the party's backing since her first successful U.S. Senate campaign in 1994, though she's lacked a credible Democratic challenger in previous races.

Delegates who withheld their support said they think Feinstein has been in Washington too long and hasn't stood strong enough for immigrants.

When she spoke longer than her allotted time, some in the crowd chanted "Time's up!" -- referring to her lengthy tenure in Congress. Thirty-seven percent of Democrats backed Feinstein, while 54 percent supported de Leon.

The vote took place Saturday evening and was counted overnight. On Sunday morning, de Leon hailed the vote as "an astounding rejection of politics as usual."

"California Democrats are hungry for new leadership that will fight for California values from the front lines, not equivocate on the sidelines," he said.

There was no immediate reaction from Feinstein.

The vote came after de Leon delivered a blistering speech that reflects deep divisions among Democrats about how to respond to Trump. De Leon questioned, among other things, remarks Feinstein had made that were interpreted by many Democratic activists here as sympathetic to Trump, and suggested she was too conventional in taking on the White House.

"The days of Democrats biding our time, biting our tongue, and triangulating at the margins are over," he said.

His speech also reflected a feeling among many Democrats, particularly younger ones, that it is time for the old guard of Democratic leaders here to step aside.

Feinstein supporters, meanwhile, said her long track record as a fighter for Democrats and women makes her the party's best choice.

"She has so much seniority, it's hard to give that up," said Cathy Jorgensen, a delegate from the farm-rich Central Valley.

But the party was fractured. It failed to unite behind a single candidate in the majority of statewide races, including for governor, where four Democrats are vying to replace outgoing Gov. Jerry Brown.

Perhaps best underscoring party tensions is the race between Feinstein and de Leon.

The longtime senator focused on her specific legislative record, including on gun control and sexual assault, saying she's a long fighter for Democratic values with the clout to get things done.

Feinstein touted her successful measure banning assault weapons in 1994, which has since expired, and pledged she would not rest until a similar bill passes again. As a senior member of the Senate Appropriations Committee, she promised she would never back funding for a wall along the U.S.-Mexico border.

But de Leon, who authored "sanctuary state" legislation to limit California authorities from cooperating with federal immigration officials, has argued that Feinstein historically failed to stand up for young illegal immigrants brought to the U.S. as children.

Information for this article was contributed by Kathleen Ronayne of The Associated Press, and by Adam Nagourney of The New York Times.