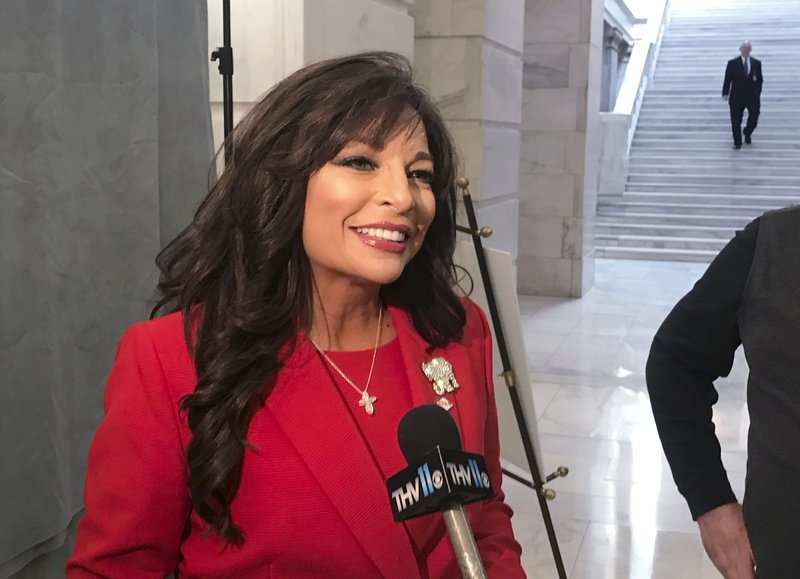 Gun range owner Jan Morgan of Hot Springs on Monday filed to challenge Gov. Asa Hutchinson in the Republican primary, and Mark West of Batesville filed to run for governor as a Libertarian candidate in the Nov. 6 general election.

On a light day for candidate filing, Republican U.S. Rep. Rick Crawford of Jonesboro also filed paperwork to run for re-election, on the same day that Libertarian candidate Elvis Presley filed for his bid to oust Crawford.

Morgan, who owns the Gun Cave shooting range in Hot Springs, paid the $15,000 filing fee to the state Republican Party and filled out the required paperwork to run for governor four days after Hutchinson did the same thing in his bid for a second four-year term. Morgan is seeking elected office for the first time.

[2018 CANDIDATES: Full list of those who have filed to run for state, federal offices]

She said she is giving Republican voters a choice in the May 22 primary election between "an establishment progressive big tax-and-spend governor or a constitutional conservative."

"We spoke out overwhelmingly in the presidential race for Donald Trump and those same people, who liked his message, are going to like Jan Morgan's message. We'll see if they show up for the primary. I'm excited about it," Morgan said.

She said Hutchinson has had "an entire term to make significant progress and taking some of that burden off the backs of the people. That's what conservative leadership does, and we haven't seen that. In fact, we have seen tax increases."

Hutchinson's campaign spokesman Jamie Barker said Monday, "We welcome Jan Morgan to the race and we'll see if anyone else joins during the filing period.

"The governor's conservative record is evident by the fact that he has cut taxes by $150 million per year; curbed the growth of state government, and over 60,000 new jobs have been created," Barker said in a written statement.

A year ago, Hutchinson signed into a law a bill to exempt military retirement benefits from state income taxes and to cut the excise tax on soft-drink syrup. To offset the tax cuts, the measure increased the state's 1.5 percent sales tax on candy and soft drinks to 6.5 percent, levied income taxes on unemployment compensation and imposed a sales tax on certain digital products.

In 2014, Morgan drew national media attention by declaring her shooting range a "Muslim Free Zone," saying that she was concerned about the safety of other customers if Muslims patronized her business.

Asked how she would be able to talk to voters and say she is open to everyone after instituting such a policy, Morgan said, "Running ... a private club where people are handling lethal weapons within a couple of feet of each other requires a higher level of discernment than running your average coffee doughnut shop.

"Running a state government [is] a totally different ballgame. I will be a governor of all the people in this state. There are laws regulating religious liberty in this state, and I will stand by the Constitution of the United States, the constitution of the state of Arkansas and the Bill of Rights," Morgan said.

"I make no apologies for the rules and the decisions that I made and put in place in order to make sure that people who are handling lethal weapons in my facility are in a safe environment," she said. That policy barring Muslims from her shooting range is still in effect, Morgan said.

Meanwhile, West, who manages the Mechanical Construction Services office in Newark, said, "I think that we're going to do some historic things as far as Libertarians are concerned in this race.

"We have an activist base that has been building election by election, so it looks like we are right at that threshold," he said.

"But there is some built-in angst out there with this 'Never Asa' segment of the state, and we're hoping to be able to capitalize on that if he survives in the primary with Jan, and hopefully capitalize on some of the perimeter issues to build a base of support that will get past the 3 percent," West said.

If West can get at least 3 percent of the vote in the governor's race in the fall, the Libertarian Party would be defined under state law as a political party that would be able to participate in the 2020 party filing period.

In the Republican primary, "I think Asa will win," he said.

"I think it might be interesting, but one of the things I learned from my last campaign is that having enough money makes a big difference in how competitive you can be. And when you look at that in that primary, it's going to be a real tough hill to climb for Jan, especially to challenge an incumbent [in an] intraparty insurgent campaign; that is always a very difficult primary to do, unless there is just built-in extra baggage that the whole voting public is aware of that would be make him a compromised incumbent," he said.

Democratic gubernatorial candidate Jared Henderson of Little Rock said he plans to file at 3 p.m. today at the state Capitol. He is a former state director for the nonprofit Teach for America in Arkansas.

For the 1st Congressional District seat, Crawford's campaign filed the congressman's paperwork to run for re-election. Crawford has served in Congress since 2011. Terms are two years long.

Crawford said in a written statement that "Washington will always need continuous scrutiny, accountability, and strong conservative leadership that can work for the people."

"I'm seeking to serve another term because we need someone in Washington who can work with the president to accomplish meaningful conservative reforms, like the Tax Cuts and Jobs Act, which is increasing take home pay for the majority of 1st district Arkansans," he said in the statement. "As far as the race is concerned, I'm taking no chances and running as I do every time, no matter the opponent."

Presley of Star City previously has run for governor as a write-in candidate and for land commissioner and state Senate.

Also Monday, District Judge Johnnie Copeland of Mountain Home filed to run for District 2, Position 1, on the Arkansas Court of Appeals, a seat held by Bart Virden of Morrilton. Virden filed for re-election on Friday.

In addition, state Republican Party Executive Director Sarah Jo Reynolds filed the paperwork Monday for Craig Christiansen of Bald Knob to challenge Rep. Michael John Gray, a Democrat from Augusta who is chairman of the state Democratic Party. Gray has served in the House since 2015.