Fairfax Drive in North Little Rock has a new, yet familiar, name, with a nod to the street's history still to come.

After construction of a $10.17 million bridge finished in December to provide a crossing over the railroad tracks, city officials began working on the natural extension of East McCain Boulevard, necessitating changing the Fairfax Drive name. The railroad overpass was needed to reduce traffic delays caused by trains and eliminate the risk of vehicle-train collisions. 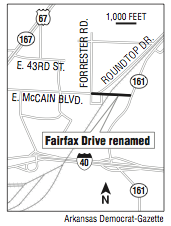 A map showing the location of Fairfax Drive.

The Fairfax name has historical meaning to the area, however, something the council pledged to commemorate in the near future by denoting the new overpass as Fairfax Crossing.

No city or Pulaski County government department, nor the North Little Rock History Commission, objected to the renaming.

City Council member Linda Robinson, though, said Monday evening that she had been asked by someone in the area, "What about our history?"

"The Fairfax family is well recognized in the McAlmont community," Robinson said. "This is an opportunity to name that bridge Fairfax Crossing, because the name Fairfax means a lot in the African-American community there."

Rosalind Davis of Jacksonville, the great-granddaughter of Harrison and Sallie Wilson Fairfax, wrote a letter to several city and state officials in December that detailed much of the area's history and her ancestors' role in it. Davis and her aunt, Sandra Spencer, are members of Community Voices of McAlmont, a nonprofit that works to preserve the area's history, she said.

Davis wrote that Tom Fairfax, a Georgia native, and his wife, Julia, lived on or near what is now 5322 Fairfax Drive, having seven children, according to the 1880 census, including Harrison Fairfax. The family sold the property to the railroad for its construction, she said.

Sallie Fairfax, Harrison's wife, "was known as an avid community activist" who volunteered in the Pulaski County Special School District and "helped raise many children in the McAlmont/North Little Rock area," according to Davis. She died in 2001 at age 101, Davis wrote.

Davis included that the Fairfax Drive area was mentioned in a historic contexts report submitted to the National Park Service in 2003 on the North Little Rock site on the Trail of Tears National Historic Trail. A pertinent passage said a road begun in 1827 between Little Rock and Memphis came near "the present-day Springhill exit on Interstate 40, and continued eastward to intersect with the Daniels Ferry road near the point where present-day Fairfax Drive joins State Highway 161."

"I was just in awe that the Trail of Tears came through there," Davis said in an interview Tuesday.

"It's very important to keep alive the names of people who were living in that area so we have some kind of history for that area," Davis said. "I just don't want it erased."

In her letter, Davis said that having the Fairfax Crossing name remain "will generate a sense of pride, motivation and a belonging to an area that has been forgotten by many."

"Just because I was born and raised out there, I pretty much thought it would be important to keep the history of the area," Davis said in her interview. "If I don't do it, or someone else doesn't do it, it won't be done. I'm happy they are keeping the name of the bridge as Fairfax. It gives us pride in knowing it will remain and not be something that will be brushed up under the carpet as a lot of African-American names and African-American places are. It's very important."

Mayor Joe Smith said Monday that the city "will put up a sign" with the name Fairfax Crossing on or near the bridge. Council member Beth White said the community wants "a small ceremony when the weather is better."

The type of sign or marker or plaque, what it will include and where it will be placed is yet to be determined, according to council discussion Monday.