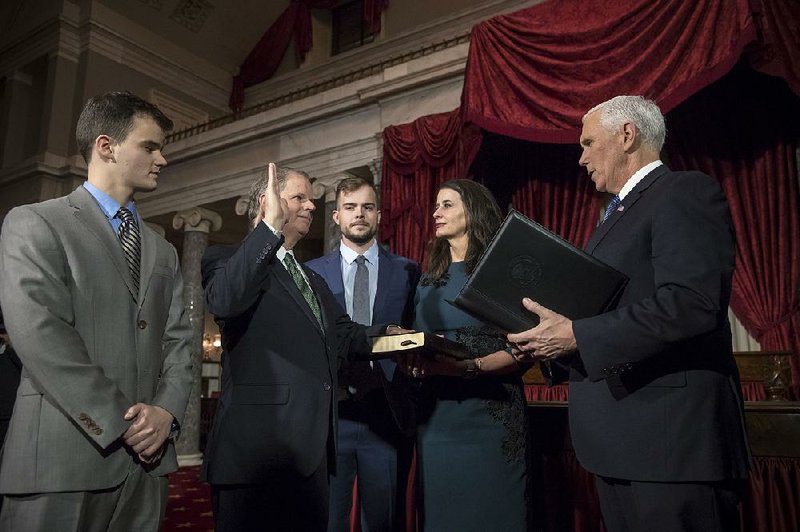 Vice President Mike Pence (right) administers the Senate oath of office during a mock swearing-in ceremony Wednesday for Sen. Doug Jones, D-Ala. Jones was joined by his wife, Louise, and their two sons.

WASHINGTON -- Democrat Doug Jones of Alabama was sworn into office Wednesday, shrinking the Senate's Republican majority and leading lawmakers of both parties to plead for more bipartisanship as Congress tackles pressing issues in advance of the 2018 midterm elections.

Vice President Mike Pence administered the Senate's oath of office to Jones, the first Alabama Democrat elected to the Senate in a quarter-century, and to former Democratic Minnesota Lt. Gov. Tina Smith, who was appointed to replace Sen. Al Franken, a Democrat who resigned over allegations of sexual misconduct.

Two former vice presidents, both Democrats, were there to support the Senate's newest members as the GOP majority narrowed to 51-49. In future party-line votes, Republicans cannot afford more than one defection.

Jones was escorted to the Senate chamber by former Vice President Joe Biden, who had headlined Jones' campaign kickoff rally. Jones defeated Republican Roy Moore in a special election -- spurred by Jeff Sessions' appointment to attorney general -- that was rocked by allegations of sexual misconduct against Moore.

Mondale recalled that he "went through something like this in the good old days." In 1964, Mondale was appointed to the U.S. Senate to fill the vacancy created when Hubert Humphrey was elected vice president.

Democrats voiced hopes that the narrowing of the GOP majority would lead to more collaboration.

Jones, 63, represents one of the most conservative states in the nation. He will be under pressure to find some areas of agreement with Republicans and has cited the funding of infrastructure improvements as one possible avenue.

Information for this article was contributed by Marcy Gordon, Andrew Taylor, Alan Fram and Kyle Potter of The Associated Press.