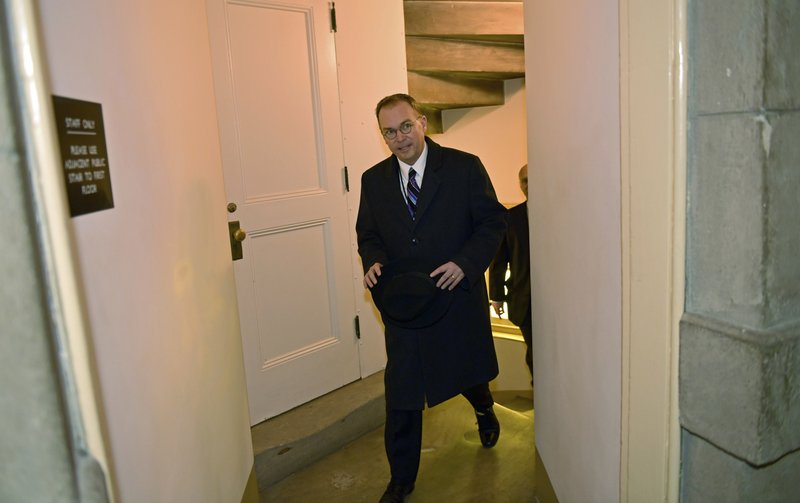 White House Budget Director Mick Mulvaney walks up a flight of stairs as he arrives for a meeting with House Speaker Paul Ryan of Wis., on Capitol Hill in Washington, Wednesday, Jan. 3, 2018. Ryan is hosting a meeting with Mulvaney, Legislative Director Marc Short and Republican and Democratic leaders of Congress. (AP Photo/Susan Walsh)

WASHINGTON -- The White House and top congressional leaders from both major parties issued upbeat assessments Wednesday after a Capitol Hill meeting in which they forged progress on a stack of unfinished Washington business, starting with a hoped-for bipartisan budget deal.

The session in the office of House Speaker Paul Ryan, R-Wis., came with little more than two weeks before the next threatened government shutdown. Topping the agenda was an effort to spare both the Pentagon and domestic Cabinet agencies from spending cuts. Other issues, including immigration, disaster aid and health care, were also discussed in hopes of resolving the raft of leftover issues, which could be a prelude to moving on to new business such as President Donald Trump's infrastructure plan.

Both sides issued positive statements after the session, which lasted more than an hour and included White House budget director Mick Mulvaney.

"We had a positive and productive meeting and all parties have agreed to continue discussing a path forward to quickly resolve all of the issues ahead of us," Sen. Charles Schumer, D-N.Y., and Rep. Nancy Pelosi, D-Calif., said in a joint statement.

The White House, Ryan and Senate Majority Leader Mitch McConnell, R-Ky., said in a joint statement of their own that they "hope that further discussions will lead to an agreement soon." McConnell briefed fellow Republicans afterward and told them that the session was "surprisingly good," according to Sen. John Cornyn, R-Texas.

Sen. Roy Blunt, R-Mo., said, "I don't think they reached any conclusions, but I think it was a fairly good meeting is what we were told."

The budget debate has been roiled by a demand from Democrats that nondefense programs win increases equal to those for the Pentagon. That was a feature of budget pacts in 2013 and 2015 that were negotiated during the tenure of President Barack Obama.

Now, with Trump in the Oval Office, Republicans insist that this idea of parity between guns and butter belongs on the scrap heap.

"We need to set aside the arbitrary notion that new defense spending be matched equally by new nondefense spending," McConnell said earlier in the day. "There is no reason why funding for our national security and our service members should be limited by an arbitrary political formula that bears no relationship to actual need."

But unlike the recently passed tax bill and the GOP's failed efforts to repeal the Obama-era health care law, the upcoming agenda will require votes from Democrats. Bipartisanship has been in scarce supply under Trump, and heading into the session, spokesmen for Ryan and Schumer were not banking on a breakthrough.

The budget battle is but one element of a tricky Washington matrix facing the White House, its GOP allies and Democratic rivals such as Schumer.

Particularly challenging is the question of illegal immigrants who were brought to the country as children but who face deportation in March because of Trump's decision to strip away Obama-issued protections for them.

Democrats say they won't go along with any budget deal until those people, living in the country under the Deferred Action for Childhood Arrivals program, are guaranteed protections. That has sparked push-back from GOP leaders who have refused to cede leverage to Democrats and insist on dealing with politically nettlesome immigration issues on a separate track.

Cornyn told reporters that he and other Republicans on the Judiciary panel, which has jurisdiction over immigration, will meet with Trump at the White House today to discuss the issue.

"I think there's plenty of goodwill and interest in trying to come up with a solution, but we're not quite there yet," Cornyn said, adding that GOP negotiators want a better sense from Trump about what he will support to better inform further talks with Democrats.

Rep. Tom Graves, R-Ga., said the president has made clear that immigration is an important issue he wants Congress to tackle.

"Our leadership's made it clear -- and I agree with them -- that this is not something that is negotiated as part of a spending package, but it is a separate issue that should merit debate and discussion aside from the spending discussion," Graves said.

Trump has recently hardened his stance on an immigration deal.

Any deal on the Deferred Action for Childhood Arrivals program must also forbid immigrants from sponsoring family members to join them in the United States, end a program that allots visas to people from countries with low rates of migration to the United States, and provide money for a wall on the Mexican border, a White House spokesman said Tuesday. The statement echoed a Trump tweet from last week.

"The Democrats have been told, and fully understand, that there can be no DACA without the desperately needed WALL at the Southern Border and an END to the horrible Chain Migration & ridiculous Lottery System of Immigration etc," the president wrote Friday, referring to the deferred-action program by its initials. "We must protect our Country at all cost!"

On Tuesday, he added, "Democrats are doing nothing for DACA -- just interested in politics."

The statement from Republicans said Democrats should "not hold funding for our troops hostage for immigration policy."

Congress punted on the budget issue twice in December by passing temporary spending measures without addressing the budget caps or a host of other priorities. The bill comes due Jan. 19.

Even if a deal on the budget caps is reached before then, Congress is likely to face having to pass another stopgap spending measure to work out the details.

Cornyn said before the meeting that the debate feels like "Groundhog Day."

"Every day we wake up and nothing seems to change around here," he said. "I don't see how things get any better if we kick the can down the road any further."

Even though Republicans control both chambers, Democrats have leverage because any resolution will need at least 60 votes to get through the Senate.

Less partisan issues are a leftover disaster-aid bill and the renewal of a children's health insurance program that has sweeping bipartisan backing.

"I hope this year can be one of bipartisanship focused on improving the stock of the middle class," Schumer said. "We can start on the budget, with opioids, and veterans' health care and pensions. With children's health insurance and disaster aid. And we can resolve the fate of the Dreamers" -- the participants of the deferred-action program -- "and say to these hardworking kids that America has a place for them, too."

Information for this article was contributed by Andrew Taylor of The Associated Press and by Jennifer Epstein, Erik Wasson, Anna Edgerton and Laura Litvan of Bloomberg News.