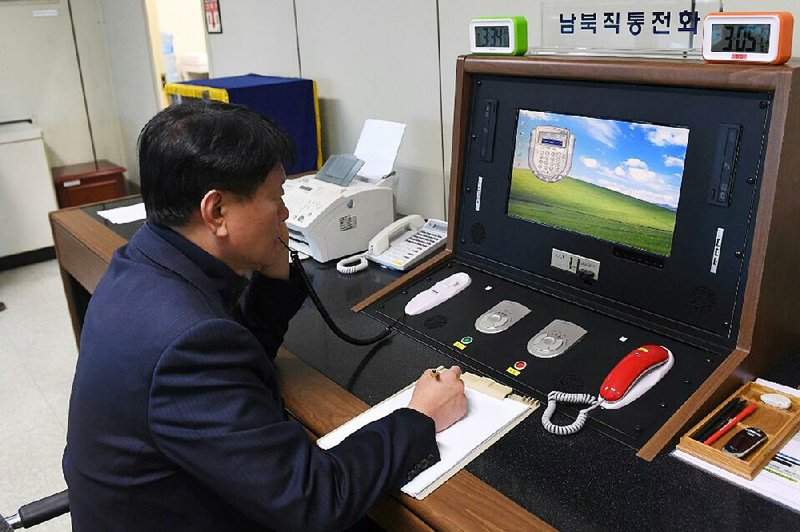 A South Korean government official talks with a North Korean officer Wednesday during a call on the dedicated hotline at the South Korean village of Panmunjom. North Korean leader Kim Jong Un reopened the communication channel on Wednesday.

BEIJING -- North and South Korea reopened a long suspended cross-border hotline on Wednesday, conducting a brief conversation to pave the way for official talks between the two sides about sending a delegation from the North to next month's Winter Olympics in the South.

Talks, if they take place, would mark the first formal dialogue between the two sides since December 2015, while the hotline has been dormant since February 2016.

The South hopes they will yield an easing of tensions after a year of nuclear and missile tests, hostile rhetoric and the risk of war.

But U.S. officials and experts have reacted cautiously and skeptically, doubting the sincerity of North Korean leader Kim Jong Un.

North Korea had earlier in the day announced that the channel would be reopened. The South's Unification Ministry then announced that officials from the North had called using the hotline at the shared border village of Panmunjom on Wednesday afternoon.

South Korea responded by proposing talks as early as Tuesday in Panmunjom, which straddles the heavily fortified Demilitarized Zone between the two Koreas.

"This is a president who is not going to cower down and is not going to be weak and is going to make sure he does what he's promised to do, and that's stand up and protect the American people," said White House press secretary Sarah Huckabee Sanders.

Information for this article was contributed by Anne Gearan of The Washington Post.