Rallies in Iran back government 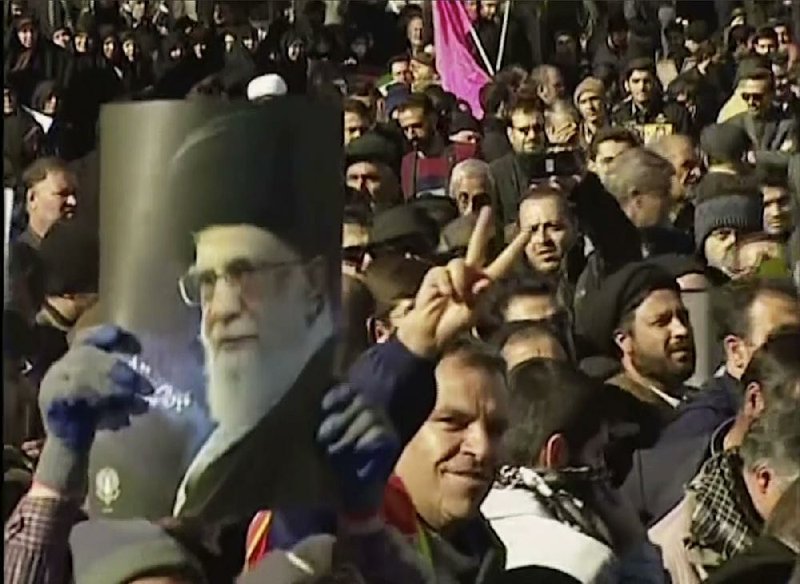 Iranians march Wednesday in Arak after tens of thousands of people reportedly took to the streets to support the government in response to a week of anti-government unrest.

TEHRAN, Iran -- Government supporters took to the streets in the tens of thousands across Iran on Wednesday as authorities tried to project a sense of stability after a week of nationwide protests sparked deadly clashes and calls for the downfall of the Islamic Republic.

But even as state television broadcast swooping helicopter shots showing support among Iran's 80 million people for its clerically overseen government, videos emerged showing the anti-government unrest that has swept major cities has also spread to the countryside. It was not clear, however, whether those were new protests or whether the videos showed earlier incidents.

Iran's ambassador to the United Nations, meanwhile, complained in a letter sent Wednesday to the Security Council president that the U.S. "has crossed every limit" in international relations by expressing support for the anti-government protesters.

The U.S. didn't immediately respond to the letter.

Earlier in the day, Trump wrote in a tweet, "Such respect for the people of Iran as they try to take back their corrupt government." He added, "You will see great support from the United States at the appropriate time!"

The violence has killed at least 21 people and seen hundreds more arrested by authorities. Demonstrators' videos from outlying provinces corresponded with Associated Press reporting from outside of Iran.

The past week's protests have been the largest since the disputed 2009 presidential election, which ended in bloodshed. While many Iranians denounce the violence that has accompanied some demonstrations, they echo the protesters' frustration over the weak economy and official corruption.

The government "should not punish the guilty and the innocent alike," said Mohammad Hossein Vakili, a 20-year-old computer science student in Tehran who has struggled to find meaningful work and who joined in peaceful protests.

"Why should they arrest someone like me when I protest the rise of the price of eggs?" he said.

On Wednesday, state TV reported pro-government demonstrations in dozens of cities and towns, including Ahvaz, the capital of the oil-rich province of Khuzestan, the Kurdish town of Kermanshah in the country's west, and Qom, the religious capital of Shiite Islam in Iran. All those cities have seen anti-government protests in recent days.

The pro-government crowds included women wearing the all-encompassing black chador, the occasional man in military fatigues and Shiite clerics wearing black turbans identifying them as descendants of the Prophet Muhammad. Some claimed online that government employees had been instructed to take part.

The English-language Press TV broadcast Wednesday's pro-government rallies live, saying they sought to "protest the violence" across the country in recent days. State TV said the demonstrations served as an "answer to the protests," which it blamed on "servants of the U.S."

Among the slickly produced signs carried by supporters at Wednesday's pro-government rallies were ones targeting Israel, Saudi Arabia and the U.S. Iran's supreme leader, Ayatollah Ali Khamenei, on Tuesday blamed the protests on meddling by "enemies of Iran."

Some demonstrators also held aloft pictures of Trump with a bright red "X" through his face. Trump's recent comments in support of the protesters have angered many Iranians, given his travel ban barring them from getting U.S. visas, as well as his comments over the nuclear deal.

The 2015 agreement, in which Iran curbed its nuclear activities in exchange for the lifting of some international sanctions, remains popular in Iran, but one of the central grievances of the protesters is that average Iranians have seen few benefits from it.

Iranian officials have downplState TV quoted the chief of the powerful Revolutionary Guard, Gen. Mohammad Ali Jafari, as saying Wednesday marked "the end of the sedition." 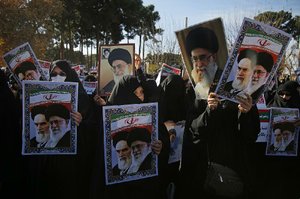 Photo by AP/MOHAMMAD ALI MARIZAD
Iranian women hold posters of the late revolutionary founder Ayatollah Ali Khomeini and Supreme Leader Ayatollah Ali Khamenei during a pro-government rally Wednesday in the holy city of Qom. Iranian authorities were working to project a sense of stability in the country after a week of protests and deadly confrontations.