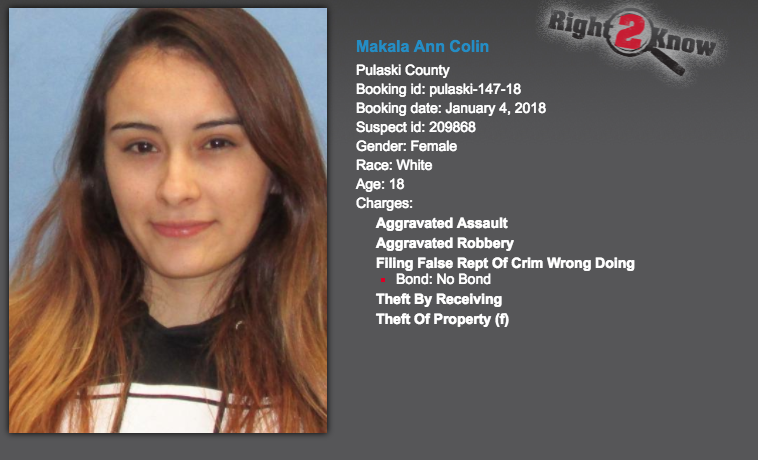 An 18-year-old woman charged in two Little Rock convenience store robberies was shot while fleeing the scene of one Monday night, according to police.

Makala Ann Colin, who lists an Alexander address, was arrested early Thursday, Pulaski County jail records show. An 18-year-old man whom police identified as a suspected accomplice was not listed in the online inmate roster as of Thursday morning.

Colin originally told police that she had been shot Monday night while walking along a Little Rock street, but an incident report from one of the robberies said that a robbery victim reported shooting an assailant as she fled.

The first robbery took place about 10:45 p.m. Monday, when a man and a woman walked up to the cash register in Supermercado Sin Fronteras at 4918 Baseline Road, according to a police report.

The woman pointed a shotgun at the cashier's face and said "Give me the money or I will shoot you," while the man, who carried a black pistol, looked around the store, authorities said.

When the employee could not open the cash drawer, the man reportedly told the woman to grab everything she could. Each took several bags of candy before running out the front door toward a trailer park across the street, the report stated.

Both spoke perfect Spanish, the cashier told police. The holdup reportedly happened while several other people, including a 17-year-old girl, were present.

About 30 minutes later, a female robber holding a "long barrel rifle" and a man with a gun entered the Exxon station at 8724 Colonel Glenn Road, authorities said.

The pair immediately pointed their weapons at the manager and several customers near the cash register, according to the report.

The 30-year-old manager said he recognized the two robbers as Colin and an 18-year-old Little Rock man, and addressed both of them by name.

"Really Makala? You're really gonna do this?" he said, according to the report. He then handed the robbers some cash.

When the 18-year-old man realized that he had been identified, he became angry, yelling that he was going to kill someone, while at the same time grabbing multiple pastries and cupcakes from a nearby display stand, the report stated.

Then the pair fled, running to a maroon Chevrolet truck that was waiting for them, the manager told officers. He added that Colin dropped the rifle, the report said.

As the manager ran after the truck trying to get the license plate number, he said, the man began shooting at him. The employee said he shot back and thought he may have shot Colin in the thigh.

The driver and the male robber then left in the truck, the manager told police, while Colin reportedly ran south on John Barrow Road.

About 8:30 a.m. Tuesday, officers spoke to Colin at CHI St. Vincent Infirmary, where she was being treated for a gunshot wound in her left thigh, police said.

Colin reportedly told officers that she had been shot around midnight while taking her usual route to her boyfriend's house. She said she heard arguing coming from a house in the 3600 block of Walker Street, then shots were fired, and she felt something hit her leg and started running, according to reports.

Colin said she reached her boyfriend's house, cleaned the wound there and waited until about 7:30 a.m. to go to the hospital, reports said.

The Exxon manager did not report the holdup until Wednesday, telling police that he had pushed the alarm button but later discovered that it was not connected and was "overwhelmed" so he went home, the report said.

He told police that a woman entered the business that day saying she was Colin's mother. She showed the manager pictures of the gunshot wound and requested that he call police to "keep her daughter from being killed" through her ties to the male robber, the report said.

The manager told police that several of his regular customers showed up and told him that the robbers had been posting about the robberies on social media, crediting someone named "Eddie" as the driver, the report said.

Police later reported discovering that the rifle purportedly carried by Colin was stolen.

The male suspect had yet to be charged in the robberies, Lt. Michael Ford with the Police Department said, adding that the investigation is ongoing.