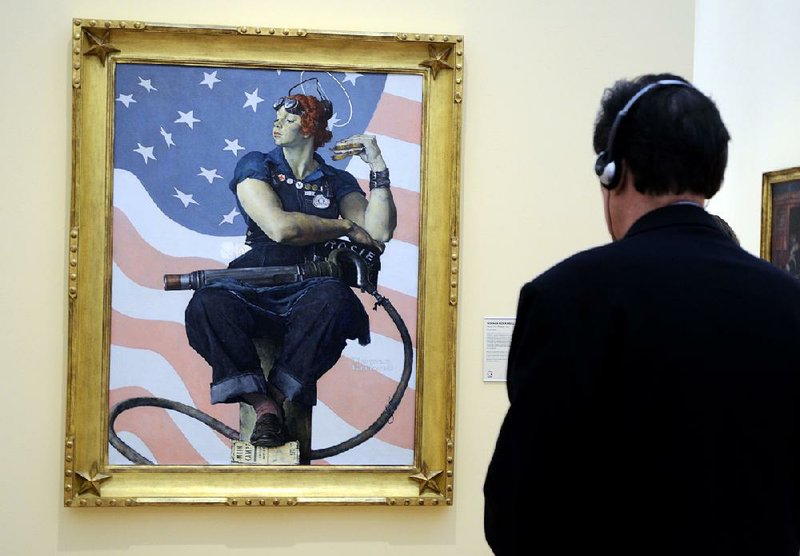 Crystal Bridges Museum of American Art in Bentonville will lend out Norman Rockwell’s Rosie the Riveter, seen in this 2011 photo, for much of this year for a traveling Rockwell exhibit.

Two of the cornerstones of the Crystal Bridges Museum of American Art permanent collection will not be on view in Bentonville for a good portion of 2018.

Asher B. Durand's Kindred Spirits and Norman Rockwell's Rosie the Riveter are scheduled to spend much of the year on loan as part of separate exhibitions. It will mark the first time the paintings have been lent out to other museums since Crystal Bridges opened in November 2011.

Crystal Bridges curator Mindy Besaw said Kindred Spirits will be removed from its place in the early-American art gallery this week in preparation for a six-month loan for an exhibition that will debut at The Metropolitan Museum of Art in New York City later this month. The exhibition, "Thomas Cole's Journey: Atlantic Crossings," will be on view in New York from Jan. 30 through May 18, then heads overseas to the National Gallery in London from June 11 to Oct. 18.

Rosie the Riveter will remain on view at Crystal Bridges through April, then will travel to The New York Historical Society as part of an exhibition from May 25 to Sept. 2. "Enduring Ideals: Rockwell, Roosevelt and the Four Freedoms," was put together by the Norman Rockwell Museum and is the first comprehensive exhibition devoted to Rockwell's depictions of Franklin Delano Roosevelt's Four Freedoms.

The Rockwell exhibition is traveling to six cities over a two-year span, but Rosie the Riveter is scheduled to be part of the show at only two locations -- the opening exhibition in New York this year and the final stop at the Norman Rockwell Museum in Stockbridge, Mass., from September to November 2020.

"We've had requests for Kindred Spirits and for Rosie the Riveter multiple times over the course of our history," Besaw said. "It just felt like these were exhibitions that were worthy, and we have many exciting things happening at Crystal Bridges that we felt we could really fill gaps. So it's good timing."

Kindred Spirits had been hanging in the New York Public Library for about 100 years when Crystal Bridges founder Alice Walton purchased it in 2005 for more than $35 million, according to The New York Times. Walton's acquisition of Durand's 1849 oil on canvas painting -- which depicts Cole and poet William Cullen Bryant standing on a rocky ledge overlooking New York's Catskills Mountains -- created a stir in the New York art community because it meant that the iconic painting would be leaving the region for the museum she was planning in Bentonville.

The piece did go on loan to several museums before Crystal Bridges opened, but Besaw said it has remained on-site -- and largely in the same spot -- the past six years. Now, Besaw said one of the fixtures of the permanent collection will serve as an "advocate" for Crystal Bridges while out on loan.

"It will be as if it's in New York telling people about us," Besaw said.

So will Rosie the Riveter, according to Besaw. Crystal Bridges announced the acquisition of one of Rockwell's most recognizable works, which serves as a symbol of women's contributions to the work force during World War II, for an undisclosed price in 2009. Rockwell created the oil on canvas painting -- which depicts a woman on lunch break holding a riveting gun in her lap and using Adolf Hitler's Mein Kampf as a foot stool -- for the May 29, 1943, cover of The Saturday Evening Post.

Plunkett added Rosie the Riveter "is a particularly important painting" within the context of the exhibition as well.

"It means a great deal that they're willing to part with it because we know, from being a museum ourselves, there are certain icons that visitors come to see," Plunkett said. "When they know that you own a particular work, it can be challenging to let it go because you don't want to disappoint the public."

In an October 2016 interview, Crystal Bridges Executive Director Rod Bigelow said the museum makes every effort to share works even though it can be hard to lend out iconic pieces. Bigelow said at the time that there were about 40 works from Crystal Bridges' permanent collection that were out on loan, and he believed it was "really critical that we share around the country and around the world where we're from and what we stand for."

Besaw said Crystal Bridges evaluates a number of factors when deciding whether to lend something from its permanent collection. It considers the institution asking for the loan, the exhibitions in which the pieces will appear and how the paintings will be used to help tell a story. Lending pieces can help develop and deepen relationships with other museums, as well.

Timing is another factor. Besaw said it was a good time to lend Kindred Spirits because the museum announced in December that it was closing its early-American galleries for two months to redesign the space. The Colonial to Early 19th Century and Late 19th Century galleries will be inaccessible to guests beginning Tuesday through March 16.

"Because of our reinstallation project for the early American galleries, people will be prompted to reconsider our permanent collection and find new favorites anyway," Besaw said. "Even if you did come and say I know Kindred Spirits is always hanging in this spot, it wouldn't even have been in the same spot anyway so it just seemed like the timing worked out better than we expected."

Rosie the Riveter has not moved from its prominent place in the 1940s to Now Gallery for three years, which will also give the museum a chance to feature other works in its absence later this year.

Besaw said the fact that two of the cornerstones of the museum's permanent collection will be on the road as part of other exhibitions this year shouldn't prevent visitors from going to Crystal Bridges. She said it will be an opportunity for Crystal Bridges to encourage "new paths" and help visitors discover "new favorites" at the museum.

"We have so many great paintings," Besaw said. "We have things that are under-appreciated that really should be highlighted. So what a great opportunity to shift our focus a little bit and highlight some of those other things that we'd like to see raised to the top of those favorites list." 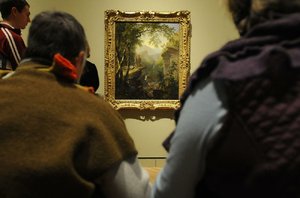 Photo by Democrat-Gazette file photo
Asher B. Durand’s Kindred Spirits, seen at Crystal Bridges Museum of American Art in this 2011 photograph, will be on loan for six months for an exhibit debuting at The Metropolitan Museum of Art in New York City later this month.