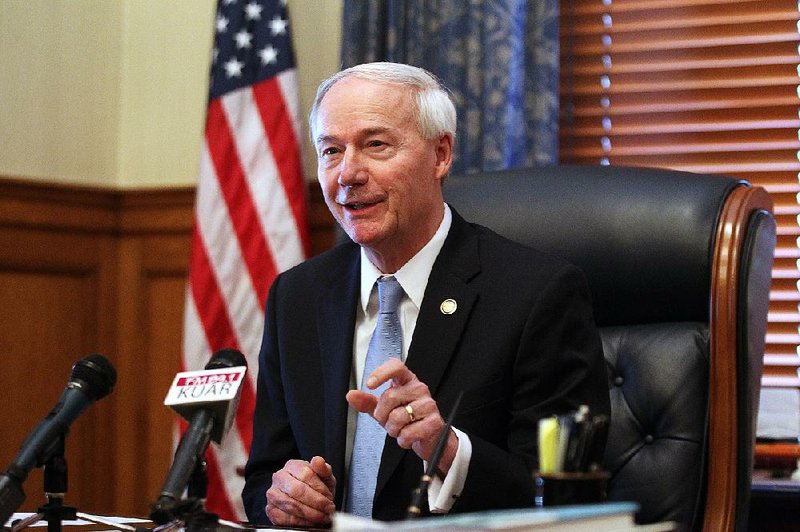 Governor Asa Hutchinson is shown in this photo.

State lawmakers will convene this week to hold hearings on Gov. Asa Hutchinson's proposed budget for next fiscal year with some uncertainty about whether there's enough support in their ranks to reauthorize the use of federal and state funds for the state's Medicaid expansion.

The hearings are for the fiscal legislative session that starts Feb. 12. The session is for state government spending bills for fiscal 2019, which starts July 1.

For fiscal 2019, the state Department of Finance and Administration projects $6.94 billion in general revenue tax collections -- up from the forecast of $6.73 billion in the current fiscal 2018 and actual collections of $6.55 billion in fiscal 2017, which ended June 30.

Individual income taxes and sales and use taxes are the state's two largest sources of general revenue.

Since the end of the recession, states have experienced a slow and steady rebound in tax revenue, according to a report released Friday by the National Conference of State Legislatures.

"While slow revenue growth has allowed states to balance their budgets, many noted a small margin for error between [fiscal] 2018 revenue estimates and appropriations," the report said. "Overall, states continue to chart a course of modest growth, while increasing spending pressures and slow revenue growth are causing some concern and keeping state budgets tight."

Hutchinson is to release his proposed budget to the Joint Budget Committee on Tuesday morning.

"The budget is lean and targets specific priorities like education and public safety," the Republican governor said Friday in a written statement.

Besides the governor, officials for the agencies for corrections, community corrections, education, health, higher education and human services will appear Tuesday-Thursday before the Joint Budget Committee to answer questions from lawmakers.

In its Dec. 1 forecast, the Department of Finance and Administration projected net general revenue available to state agencies at $5.69 billion in fiscal 2019.

This forecast factors in no longer spending $65 million a year on desegregation payments to three Pulaski County school districts and using the savings from that to reduce the sales tax rate on groceries from 1.5 percent to 0.125 percent. The grocery tax change is effective Jan. 1, 2019, under a 2013 law, and is expected to reduce general revenue by about $25 million in fiscal 2019, said Whitney McLaughlin, a tax analyst for the finance department.

The forecast also factors in a projected $25 million reduction when individual income tax rates are cut for Arkansans with less than $21,000 in taxable income. That cut starts Jan. 1, 2019, and amounts to $50 million a full fiscal year.

Hutchinson has signaled that "as an additional conservative tool to managing the budget, we will present to the General Assembly a [fiscal 2019] budget that will reduce spending" and provide "a sufficient cushion in the event there is any unanticipated economic news that changes the revenue picture next year."

He has declined to release details ahead of his appearance before the Joint Budget Committee on Tuesday.

"I think the concept is good," said Sen. Larry Teague, D-Nashville, who is the committee's co-chairman.

"We just have to make sure we do it right. What I don't what to do is to weaken the RSA," Teague said, referring to the Revenue Stabilization Act, under which general revenue is distributed to state agencies.

With an eye toward winning the votes to reauthorize funding for the Medicaid expansion, Hutchinson announced Thursday that he would ask for about $47 million less in general revenue for the overall Medicaid program than he initially intended to seek. Approving the funds will take a three-fourths vote in the House and Senate.

That means Hutchinson will seek about $1.250 billion in general revenue for the overall Medicaid program rather than $1.297 billion -- up from the current funded budget of $1.113 billion -- said the state budget administrator, Duncan Baird.

The governor, when asked how he plans to use the savings, said Friday in a written statement that "my goal is to create more robust reserve funds in Arkansas and to resist the traditional approach of spending all tax revenue just because they exist. Reserve funds will improve our bond ratings and will provide greater flexibility in the future for future tax cuts or in the event of an economic downturn."

Hutchinson said efforts to reduce Arkansas' Medicaid spending and enrollment will mean that his request for federal and state funding for the overall program during fiscal 2019 will be about $478 million lower than what he had initially planned. That would slice the budget for the Medicaid program to about $7.5 billion -- about $55 million less than the state budgeted in fiscal 2018.

He said lawmakers "are rightfully concerned about the state budget numbers and Medicaid growth, and this should give them a higher level of confidence that this trend will continue.

"We are asking for a Medicaid waiver [from the federal government] that will even add to the case that we make. But I'm still confident that we will get our appropriation even with a reduced number [of members] in the Senate," Hutchinson said. The 35-member Senate has two vacancies. The House now has 99 members with one vacancy. The vacancies will be filled in May 22 special elections.

"Medicaid expansion is a scam," he said.

The 2013 Legislature authorized Arkansas' version of Medicaid expansion when Searcy Democrat Mike Beebe was governor. The program was first known as the private option, with the state purchasing private health insurance for participants. It extended eligibility to adults with incomes of up to 138 percent of the poverty level; $16,643 for an individual, for example, or $33,948 for a family of four.

The program is now called Arkansas Works under Hutchinson, who has changed the program with the Legislature's blessing.

But the program has deeply divided Republicans ever since it was created.

That's often made it a struggle to get 27 votes in the Senate and 75 votes in the House to authorize the use of state and federal funds for the program.

In his bid for election to a second four-year term, Hutchinson faces a critic of the Medicaid expansion. Hot Springs Republican Jan Morgan has announced plans to run in the May 22 Republican primary.

"We should end this program now, under our own terms, before this is forced on us by the federal government," Morgan said on her campaign website.

Senate President Pro Tempore Jonathan Dismang, R-Searcy, said he believes a lot of whether the Senate is able to get 27 votes for reauthorizing funding for the Medicaid expansion "is going to depend on when the governor makes his request and then makes his budget presentation [on Tuesday]."

House Speaker Jeremy Gillam, R-Judsonia, said he believes a lot of whether the House can get 75 votes for Medicaid expansion funding will depend on what comes out of Washington. He referred partly to any possible changes in the federal Patient Protection and Affordable Care Act and partly to related waivers that Hutchinson has sought from the Trump administration.

"If the waivers come through, that may completely change several people's attitudes towards [reauthorizing the funding] because of the savings and things that are going to be attributed to that," Gillam said.

"I think you're going to be in a little bit of a holding pattern waiting on news from the Hill, so to speak, on the waivers and where we're at."

Hutchinson is seeking federal waivers to shift about 60,000 people off the program by reducing the maximum income cutoff to 100 percent of the federal poverty level and to impose a work requirement on many of the people who remain in the program.

"I find it curious that the administration that wants to completely repeal the ACA in totality, then would have any hesitation on a component of it being modified in a way that would ideologically line up with what they were targeting to begin with," Gillam said, referring to reducing the income cutoff.

Dismang said the Trump administration's approval of the waiver request would help the expansion funding's prospects in the Senate, "but I also think that members understand that we are waiting on the feds at this point.

"We have done our part legislatively and the governor's office has done their part as far as the proposal, and we are working with a Republican administration and we're kind of on their time frame at this point," he said.

Hutchinson said, "We're still confident that this will be granted in due time.

"This gives the Trump administration a win in the sense of giving greater flexibility to the states. It saves the federal government a significant amount. I think it's over $400 million in Medicaid spending," the governor said. "It puts Arkansas in a position to be the first state to roll back the Medicaid expansion. This is certainly a win for the Trump administration as well as being the right thing to do for the budget of Arkansas."

Gillam said Hutchinson's request for $10 million more for higher education has "pretty solid" prospects for approval by the Legislature.

But Sen. Bart Hester, R-Cave Springs, said it's not popular to give more money to higher education because "it is bloated and fat and the return on investment is simply not there."

Hutchinson said, "The long-term funding formula already has been approved by the Legislature and I am optimistic that the necessary funding to support the efficiency and productivity initiative will be supported as well." 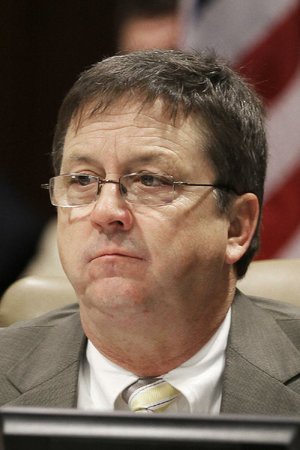 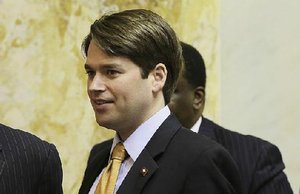 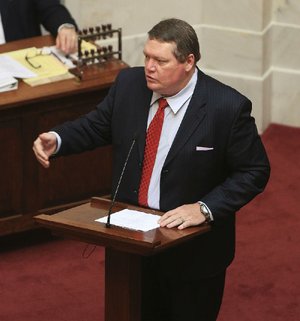 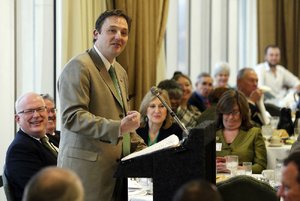 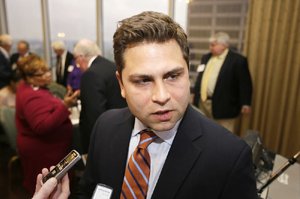 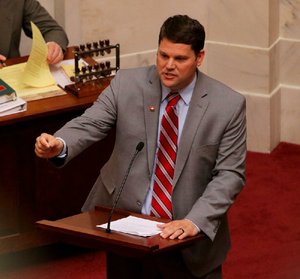