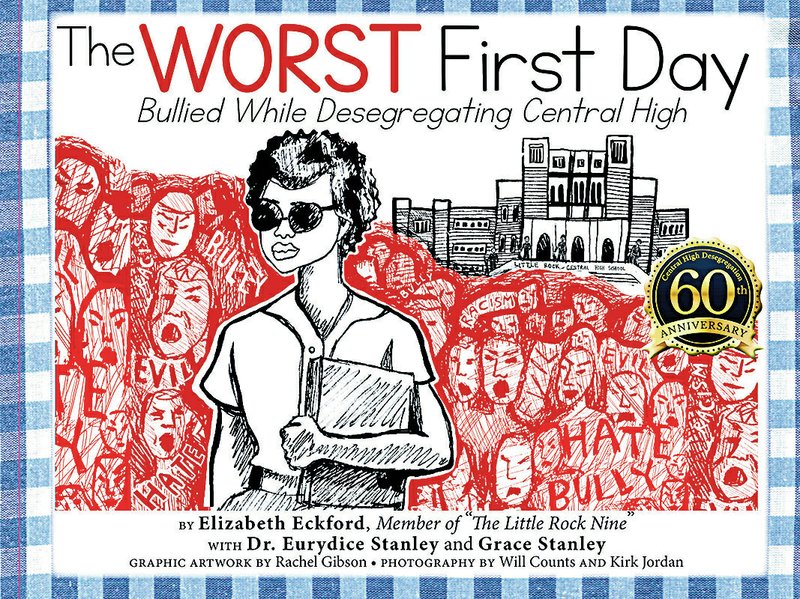 Here is the cover of a new book, The Worst First Day: Bullied While Desegregating Central High, written by Elizabeth Eckford of Little Rock with Eurydice Stanley and Grace Stanley of Pensacola, Fla., and with illustrations by Rachel Gibson, a senior at Harding University.

A new dress, a new school and an unprecedented opportunity to be a part of educational and societal change: 15-year-old Elizabeth Eckford was excited about starting classes at Little Rock Central High School on the morning of Sept. 4, 1957.

Now, in her first book about her role 60 years ago in the racial desegregation of the school, Eckford and her co-authors tell in verse how Eckford's anticipation turned to confusion and terror as a crowd of angry adults and armed soldiers blocked the teen -- the first of nine black students to arrive at the campus that day -- from entering the building.

"As I rode the bus to school, I felt that I was being transported to a whole new world.

With each inch that I moved closer, my dreams soared higher!

I wondered who'd be my new friends and if I received my desired classes from the school registrar.

Little did I know that I would soon be entering a cauldron of fire."

Eckford's memories of her 1957-58 school year at Central are told in The Worst First Day: Bullied While Desegregating Central High, written by her with Eurydice Stanley and Grace Stanley of Pensacola, Fla., and with illustrations by Rachel Gibson, a senior at Harding University.

Eckford said in a telephone interview this week that the book is meant to be a teaching tool that builds on the oral history presentations she makes to student groups.

"My intent is to teach them a few lessons about how powerful their voices can be and that they can support someone who is being harassed" without putting themselves in danger, she said. "I also talk about their responsibilities for the kind of community they have," Eckford said.

Eckford and the mother-daughter team of Stanleys will read aloud passages of the book and elaborate on its contents at two events this weekend in Little Rock. Those events will be at:

The softcover, 150-page book of verse, photographs, drawings, essays and documents from the time when resistance to racial desegregation put an international spotlight on Little Rock will be on sale for $25 at the events, both of which are open at no cost to the public. The book is published by Eurydice Stanley's Lamp Press.

The Little Rock School District in 1957 made arrangements to admit carefully selected black students to the all-white Central High to comply with the 1954 U.S. Supreme Count's declaration that schools that were racially segregated by law were unconstitutional.

Eckford arrived at the school by herself that September day.

She, and ultimately the other eight black students, were turned away by the Arkansas National Guard on orders of Gov. Orval Faubus, who said he did it to prevent violence. Photographs of the stoic Eckford walking along Park Street to the city bus stop with the jeering crowd behind her are among the most iconic photographs of the 20th century.

"I was terrified as I navigated between the soldiers and the angry crowd, wondering

'Why is this happening? Can't anyone help?' I cried internally.

But when I approached her to request help, she spat in my face promptly!"

President Dwight Eisenhower ordered the U.S. Army's 101st Airborne Division and federalized the Arkansas National Guard soldiers to uphold the law and to protect the nine students, who began their first full day of classes Sept. 25, 1957. The students completed the school year despite ongoing physical and verbal harassment from some fellow students and indifference from some school staff members.

The city's high schools were closed to all students for the following 1958-59 school year to avoid the continuing desegregation.

In writing a book, Eckford joins other Little Rock Nine members such as Carlotta Walls LaNier and Melba Pattillo Beals who have written memoirs. Eckford previously told her experiences to David Margolis for his 2012 book, Elizabeth and Hazel: Two Women of Little Rock.

Asked whether there is new information in The Worse First Day, Eckford said that in her talks with students "most are not aware of the extent of the physical abuse we endured. Most of the books that have been written by historians don't even mention that. or, if they do, it's only in passing. People don't know we sustained that for a whole school year and that the principal's response was 'If a teacher didn't see it, it didn't happen.'

"There was a lot of indifference," Eckford said. "I don't think people are aware of that. That wouldn't be tolerated today."

Eckford does name a tormentor or two and also recognizes two students who were kind to her.

Gibson, 21, of Longview, Texas, the book's illustrator and a senior earning a degree in graphic design at Harding, incorporated that bullying into her art for the book, even interspersing the word "Bully" amongst the dark shadowy crowds of student hecklers.

"It's a rough style," Gibson said of the black and white ink drawings. "It is supposed to be kind of edgy and scribbly. It's not perfect, but that adds to the storytelling of it. It was a messy time."

Gibson said she had become aware of the photos of Eckford about a year ago and had done some drawings from the photos. When Ruby Bridges, another civil rights-era figure, spoke at Harding, both Gibson and Eckford were in attendance. Gibson met Eckford briefly and later sent Eckford's escort one of her drawings of Eckford. That caught the attention of Eurydice Stanley.

Eurydice Stanley, a retired Army lieutenant colonel, a writer and a motivational speaker, said she took the initiative to meet Eckford 20 years ago when Stanley was assigned to Camp Robinson and the city, the state and the nation were commemorating the 40th anniversary of the desegregation of Central High.

The book is geared for millennials and young people, sixth grade and up, Eurydice Stanley said, noting that the verse style of writing is a means to attract those young people and others who are unaware of the history.

Stanley and her daughter put Eckford's recollections into verse for Eckford to review, alter and fact-check. The book also includes information on Jim Crow laws, the Brown v. Topeka Board of Education case in the Supreme Court and other issues of the day that add context to Eckford's personal story.

The book includes a foreword by Sybil Jordan Hampton, a former president of the Winthrop Rockefeller Foundation and herself a black student in the early days of racial desegregation at Central.

Some of the photos in the book are from the Arkansas Democrat-Gazette archives. Central High Principal Nancy Rousseau is an author of one of the essays in the book. Both Stanley and Eckford also credited the Very Rev. ChristophKeller III, dean and rector of Trinity Episcopal Cathedral, for his support for the book's preparation. Keller is another Central High graduate.

More than a book about racism in the 20th century, The Worst First Day is a timely book about bullying and leadership, Stanley said, giving it what she called "a hashtag" description of "#WalkPastHate."

"Remember my first day at Central the next time you are having a bad day at work or at school.

It proves there is no limit to what you can achieve despite naysayers who attack or berate.

Know that I am extremely proud of you and always want you to walk confidently with your head held high.

Most importantly when faced with adversity follow my lead and walk past hate."