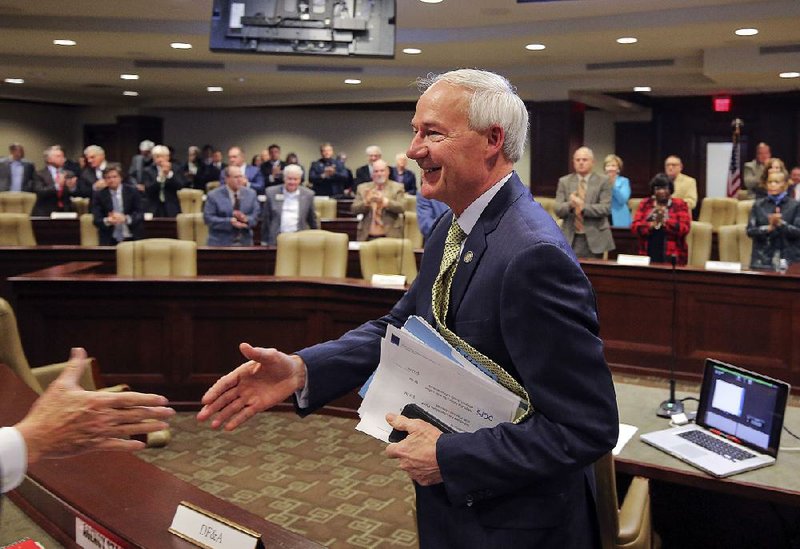 Gov. Asa Hutchinson greets legislators Tuesday at a meeting of the Joint Budget Committee. He said his budget proposal “is conservative in spending, increases our savings and invests in the future.” ( Benjamin Krain)

Gov. Asa Hutchinson on Tuesday pitched to legislators a $5.63 billion spending plan for next fiscal year that would be nearly $173 million more than the current general revenue budget, with most of the new money devoted to the state's Medicaid program.

The governor's budget for fiscal 2019 -- which starts July 1 -- also would provide a surplus of about $64 million, he said. Hutchinson said $48 million of that would go into a restricted reserve fund that could be used in an economic downturn. The remaining $16 million would be used to match federal highway funds.

"This budget is conservative in spending, increases our savings and invests in the future," the Republican governor told the Joint Budget Committee. Tuesday was the committee's first day of its budget hearings this week in advance of the fiscal session starting Feb. 12.

Hutchinson also said he sent a letter dated Tuesday to the chiefs of the state's four-year colleges asking them to freeze in-state tuition rates for the coming school year. He also asked the two-year colleges to keep any tuition increases to the consumer price index.

He said four-year colleges have averaged annual tuition increases ranging from 3.03 percent to 6.2 percent during the past 10 years.

Hutchinson told lawmakers that his administration last year initially proposed a fiscal 2019 budget that allocated $5.7 billion in general revenue and "the [revised] budget I present today reflects real spending cuts in a number of agencies through efficiencies without a reduction in services."

The updated budget projects slower growth in Medicaid spending, provides for increased funding for an adequate education to public school students, increases funding for public safety, and "reduces our historic reliance on surpluses to fund ongoing budget needs," he said.

"The result of all of these changes is net reduction in overall spending in fiscal year 2019, as compared to the budget I presented last year, [and] the reduction amounts to a net savings of $64 million," Hutchinson said.

Hutchinson proposes to increase the budget for the public school fund by $1.3 million to $2.19 billion and for the educational facilities partnership program by $3.3 million to $41.8 million.

"Because of the growing economy, the educational adequacy fund, which primarily is made up of the seven-eighths of a cent sales tax, which has never been sufficient to fully fund adequacy, is now sufficient to meet the legislative mandate on education spending to achieve adequacy," he said. That means he won't have to propose a $50 million transfer from general revenue to the public schools.

Hutchinson said he's asked the Department of Education and other agencies to reduce the amount of general revenue used to cover administrative costs and overhead. These spending reductions, reflecting increased efficiency, will total about $3 million, he said.

The Medicaid program would get a $137.9 million increase, to $1.25 billion. That's about $55 million less than what he originally planned to seek and results from a reduction in the Medicaid rolls, an improving economy and the department's efficiency efforts, the governor said.

The increase in the rate of state matching funds to match federal dollars shows that state wages are increasing, "so we are having to carry a little bit higher percent of our share of the Medicaid spending," he said.

The federal matching rate for the Medicaid program has dipped from 70.87 percent to 70.51 percent, said Human Services Department spokesman Amy Webb. The state pays the difference.

The other proposed increase in Medicaid spending is from a $35.7 million increase in state funds for the expansion known as Arkansas Works, Hutchinson said. The state's share of the program was 5 percent last year and is 6 percent this year and will be 7 percent next year, state officials said.

Sen. Bryan King, R-Green Forest, told state budget administrator Duncan Baird, "You guys used to say all the time, if we took people off Medicaid, that's going to be a hole in the budget. You are going to cause budget troubles if we take people off Medicaid expansion.

"Now, the governor is saying in videos and everything that we are saving money and spending less by taking people off. Total flip-flop," he said.

But Baird said, "I think that you are talking about two different things."

After the committee's meeting, Hutchinson said in a written statement that "there is a difference between managing Arkansas Works and ending the program.

"Ending the program as advocated by some would shift a higher percent of healthcare costs to the state. In contrast to ending Arkansas Works, we are managing the program so that only those who are income qualified are receiving benefits. This improved management and a strong economy has resulted in 58,000 people moving off Arkansas Works last year. This saves us money and that is a good thing. The distinction is clear," he said.

The Children and Family Services Division would get a $7.3 million increase, to $124 million, under the fiscal 2019 proposal. Hutchinson said his proposal includes funding for 65 new child welfare caseworkers.

"Funding is in place for the improvement needed to reduce violence in prison," he said. "There is some in the budget for that that is part of their normal prison operations, but I wanted to emphasize that is in place."

But Sen. Will Bond, D-Little Rock, said the caseloads of probation and parole officers are too high based on national standards, "so we have to make it a priority" and use some of the projected $64 million surplus to pay for more parole and parole officers.

Hutchinson proposed increasing the county jail reimbursement by $4 million to $18.3 million. County jails are reimbursed for housing a backlog of state inmates.

The governor also seeks an $8 million boost in the merit adjustment fund to $24 million. Baird said the additional money would be used for performance-based merit raises for state employees, but there have been no decisions on percentage increases.

Hutchinson told lawmakers he is seeking $10 million more for two- and four-year colleges to implement a new higher-education productivity funding formula. The governor thanked legislators for authorizing the implementation of that model, "creating that new emphasis upon student progression versus simply student enrollment."

The money is part of a proposed $12 million increase for higher education, to $745 million.

That increase factors in a $2.6 million increase for Eastern Arkansas Community College, to $8.4 million. That increase came from the $2.6 million previously for Crowley's Ridge Technical Institute, which merged with the community college.

Hutchinson told reporters that his request to colleges to limit tuition increases isn't "a trade" for more general revenue for them.

"The productivity funding model has all been approved, so this has been set in motion, so they are really separate issues. But I wanted to do this since I became governor ... to challenge our four-year institutions in a more specific way in terms of efficiency, and I thought this was a good time and good place to do it," he said.

University of Arkansas, Fayetteville Chancellor Joe Steinmetz said, "Since I became chancellor of the state's flagship land-grant institution in 2016, I've been actively working to eliminate barriers of affordability and access to Arkansans' ability to obtain a college degree.

"That's why I've consistently recommended only modest tuition increases for the past two years for in-state students, aiming as Gov. Hutchinson suggests to not exceed the Consumer Price Index of around 3 percent," Steinmetz said in a written statement in response to a reporter's questions. "We welcome and accept the governor's challenge of holding tuition for in-state students flat for the 2018-19 academic year and will continue to seek ways to improve our efficiency and contain costs. Student success, access and affordability remain among our chief priorities."

"One of the top ASU System strategic planning goals is to use the CPI as the guide for tuition requests from our campuses," he said in a written statement. "In the absence of dedicated state funding for capital improvements, deferred maintenance, health insurance costs, and faculty and staff salaries, it's going to take continued creative thinking and changes in how we operate to meet the short-term and long-term needs of our students. This is precisely why the ASU System has been proactive in the past few years in containing costs, seeking new revenue streams and promoting maximum efficiency in our operations."

Hutchinson said his letter to four-year colleges doesn't affect the University of Arkansas for Medical Sciences. UAMS announced plans Monday to eliminate 600 positions, nearly half of which are filled, to curb a larger-than-expected deficit.

"I am very aware of the financial constraints that they have been under. We have had occasion to help since I have been governor. But I have encouraged them to manage their business side efficiently, and I think this is part of what they have to do to run their hospital in a competitive way that does not rely more upon general revenues, so I really hurt for the families that are impacted," he told reporters.

"I hope in this growing economy there will be plenty of job opportunities for them and our workforce services wants to stand ready if there are any new training needs for those families impacted," the governor said.

Hutchinson said he is projecting a surplus of about $64 million in fiscal 2019.

"The goal is to create a surplus that will be a cushion for future economic changes," he said.

"But it will also be the foundation and sets the stage for future tax cuts and increasing the competitiveness of Arkansas' tax rates," he said. The Legislature in 2015 and 2017 approved Hutchinson's plans to cut individual income-tax rates by a total of $150 million a year. The governor has repeatedly said he wants to cut the tax rates more.

Hutchinson said $47.9 million of his projected surplus would go to a new restricted reserve fund that can be tapped only with the approval of the Legislature, and $15.9 million would go to the highway transfer fund in accordance with his plan that the Legislature enacted in 2016. He said there is already more than $20 million set aside to help meet the state's need for $50 million a year to match $200 million in federal highway funds.

The Legislature created a long-term reserve fund last year with a starting balance of $100 million and that fund has grown to $120 million, he said.

"The stability of our budget, our conservative budget system and our reserve funds are selling points as we recruit industry to our state," Hutchinson said. 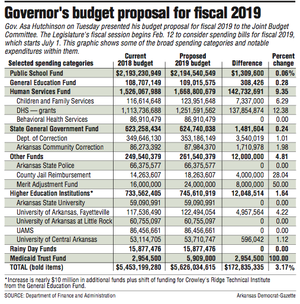 Information about the Governor's budget proposal for fiscal 2019