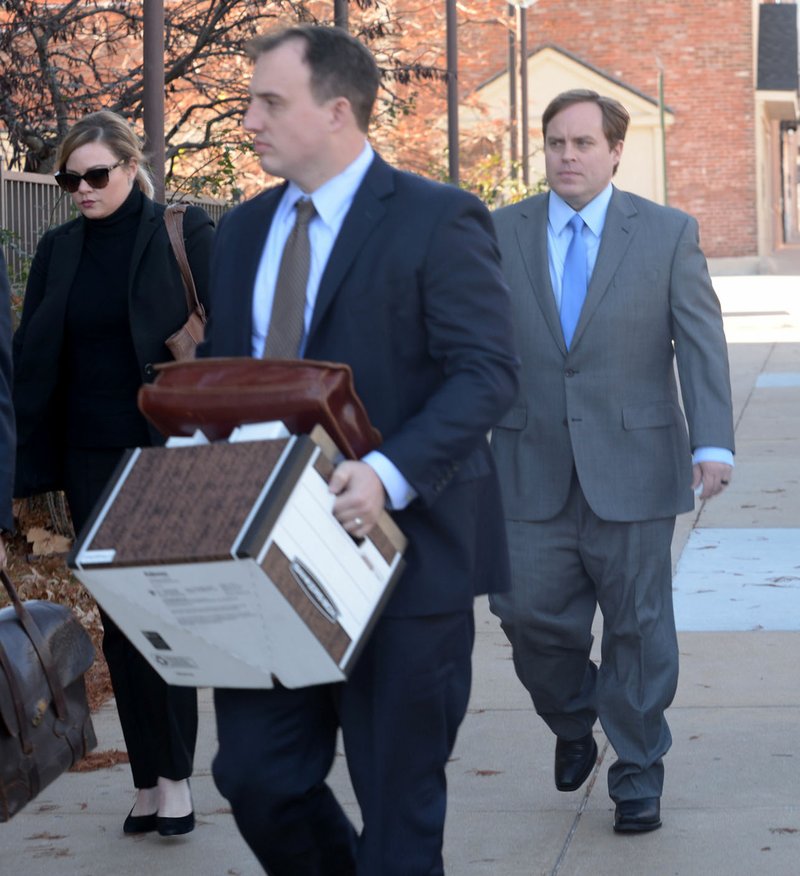 FAYETTEVILLE -- Attorney W.H. Taylor was taken into a closed federal court hearing for an hour and a half as a witness Wednesday in the public-corruption case against former state Sen. Jon Woods.

Wednesday's hearing concerned whether certain sealed documents in the case should be subject to attorney-client privilege, barring their use by the prosecution, according to court documents available to the public.

The sealed documents in dispute came from a time period in which Taylor was Woods' defense attorney and simultaneously represented an FBI investigator in Woods' case, Bob Cessario, in a civil matter, according to court documents. Woods is now represented by Patrick Benca of Little Rock.

Woods; Oren Paris III, president of Ecclesia College in Springdale; and consultant Randell Shelton Jr. are accused in a federal indictment of participating in a kickback scheme. Trial is set for April 9. More pretrial hearings are set for Jan. 25 and April 4.

Officials cleared U.S. District Judge Timothy Brooks' courtroom just before the hearing began at 9 a.m. Taylor of Fayetteville went in to testify about 9:45 a.m. and did not leave until about 11:15 a.m. Taylor said afterward that he could not comment on the case.

Other witnesses were interim U.S. Attorney Kenneth Elser and Cessario.

Elser was the next witness to testify in the case, according to a brief summary of proceedings posted on the court's website Wednesday evening. His testimony lasted from the time Taylor's ended until the court broke for lunch at 1 p.m. The hearing resumed at 2 p.m. with Cessario's testimony, followed by arguments from attorneys, ending about 3:45 p.m.

Brooks took the issues in the hearing under advisement and will release a written ruling in due course, according to the summary.

Neither Elser, Benca nor Woods would comment after the hearing.

According to previously released court records, Taylor encouraged his then-client Woods to make a statement that the government intends to use as evidence. Defense attorneys for Paris and Shelton have yet to see the statement because the issue of whether it is privileged is still in dispute, according to a Tuesday court order.

Woods is accused of accepting kickbacks in return for directing state General Improvement Fund grants to the college. The grants were approved by Woods with kickbacks passed through Shelton's consulting firm, according to the indictment.

The indictment alleges Paris paid Woods and former state Rep. Micah Neal of Springdale kickbacks in return for $550,000 in grants to his college from 2013 through 2014.

The indictment doesn't give a total figure of what Woods, a Springdale Republican, is accused of receiving in kickbacks because it says portions were paid in cash.

Woods, Shelton and Paris face up to 20 years in prison on the fraud and conspiracy charges, if convicted. Woods faces an additional 10 years on the money laundering charge, if convicted. All three may also be ordered to forfeit any money or property obtained through their actions, if found guilty.

The secrecy surrounding this case has become an issue before the court.

The U.S. attorney's office in March requested a protection order sealing documents in the case. Its motion cited both the need to protect the defendants' private financial information and "confidential and sensitive information related to other law enforcement investigations. If this information were to be publicly disclosed, such disclosure might impair an ongoing investigation or infringe on the privacy rights of third parties whose conduct is or was at one time under investigation."

Defense attorneys didn't object at the time nor at their clients' arraignment in May, but the defendants asked the judge to unseal the documents in a motion filed Oct. 3, claiming the secrecy had become a hindrance to preparing a defense.

Freedom of Information Act requests by the Northwest Arkansas Democrat-Gazette a year ago this month found at least three of the state's eight economic development districts, which administered the General Improvement Fund grants, had been subpoenaed by federal investigators. Another development district did not respond to the open-records request.

Since that time, state legislative staff members obtained permission to hire outside legal counsel to represent them in dealing with federal investigators who have requested more records relating to the improvement fund grants. The records include state legislators' working papers.

Other issues in the Woods case are expected to be taken up in a hearing Jan. 25. One issue is a motion to dismiss based on the alleged government failure to disclose relevant audio recordings. The laptop computer used in the investigation was missing 79 covertly recorded audio files because Cessario took it home for unauthorized personal use and then wiped the machine's memory before returning it, according to a letter from government attorneys filed last month with the court. Woods' case was originally set for trial Dec. 14, but was delayed after this incident came to light.

That letter was under seal by court order, Brooks ruled in December. Therefore, his court also will hold a hearing Jan. 25 to determine if the attorney who attached the government's letter to a motion posted on the court's website, Gregory Payne, should be subject to disciplinary action. Payne is an attorney for Paris.

The General Improvement Fund, which was controlled by legislators, consisted of state tax money left unallocated at the end of each fiscal year and interest earned on state deposits. Each legislator was given a share of the fund to be directed to a nonprofit group or government entity. The state Supreme Court declared this method of distributing general improvement money unconstitutional in a ruling Oct. 5.