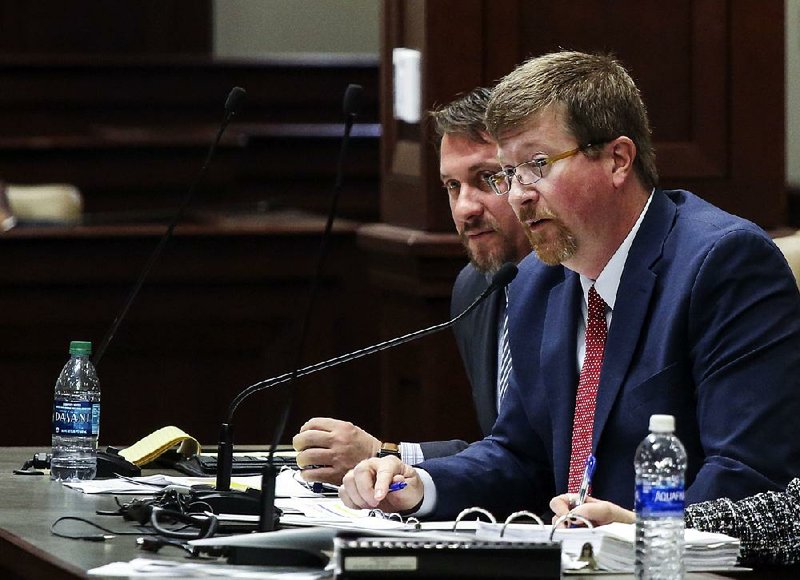 Education Commissioner Johnny Key speaks Wednesday during a meeting in Little Rock of the Joint Budget Committee, where the governor’s proposed public-school budget was discussed.

A handful of state lawmakers on Wednesday raised questions about Gov. Asa Hutchinson's decision to reduce his proposed budget's reliance on general revenue in the coming fiscal year to fund an adequate education for public school students.

The governor told lawmakers Tuesday that the growth in the state's educational adequacy trust fund, primarily funded by a seven-eighths of a percent sales tax, means that he won't have to ask the Legislature to transfer about $50 million in additional general revenue to the Public School Fund in fiscal 2019 to follow the educational adequacy recommendations of the House and Senate Education committees.

Hutchinson instead proposed a $1.3 million increase, to $2.19 billion, in general revenue for the Public School Fund for fiscal 2019. The fund has other sources of money.

After holding a two-hour hearing, the Joint Budget Committee directed legislative staff members to draft an appropriation to reflect Hutchinson's request for $2.9 billion in spending authority for the Public School Fund. Appropriations bills will be considered in the fiscal session starting Feb. 12.

The proposed appropriation would cut the spending authority for the fund by $8.9 million in fiscal 2019, from the amount in fiscal 2018. The appropriation would increase individual line items in the fund by $56.8 million, but also eliminate about $65.7 million in desegregation payments to three Pulaski County school districts, state officials said. The savings from the end of the desegregation payments will be used to reduce the sales tax on groceries from 1.5 percent to one-eighth of a percent, effective Jan. 1, under a 2013 state law.

Education Commissioner Johnny Key told lawmakers that in November 2016, the governor's initial fiscal 2019 budget proposed a $52 million increase in general revenue for the Public School Fund based on the House and Senate Education committees' educational adequacy recommendations at the time.

The proposed increase was based on projections then for student growth, for growth in property tax collections from the uniform 25-mill tax rate in each school district and "what we were seeing in the educational adequacy fund" 2½ years ago, Key said.

"We have seen property assessments around the state grow at a higher rate than what we expected at the time, so that means the 25-mill uniform rate of tax is generating more funds into the Public School Fund than what was anticipated when we were preparing the two-year projections in 2016. All the adequacy increase that was recommended can now be handled in that growth [in property tax collections] and any additional not covered that is covered by [those collections] can be handled by growth in the adequacy trust fund," he said.

Sen. Will Bond, D-Little Rock, said he was one of 54 representatives who voted in a 2004 special session for the seven-eighths of a percent sales-tax increase to raise more money for educational adequacy, so he gets a little nervous about pulling back general revenue funding for public schools.

Among other things, Bond asked Key whether the state has a teacher recruitment problem.

"We definitely have challenges throughout the state with respect to that," Key said.

He said the number of students enrolling in teacher education programs across the state has declined in the past five or six years and "we have started to see a trough.

"We think that's about to bottom out and, based some of the work that is going on around the state, that's going up," Key said.

Bond asked whether there was discussion about using this $50 million in general revenue to somehow solve this teacher recruitment problem and train the next generation of teachers.

Key said, "My response to that would be, by the [Education] Department, no."

He said the House and Senate Education committees determined whether they needed to make any changes in their previous recommendations on educational adequacy, "so what you see reflected here [in the fiscal 2019 budget] represents the recommendations that came from that and there was no changes recommended."

Bond said, "We as a Legislature have to begin to take part in setting priorities for the state and I think it is time for us to start talking about being No. 1 in areas like pre-[kindergarten] funding, teacher recruitment [and] teacher salaries."

Key said Arkansas' teacher salaries rank "in the middle of the pack" compared with neighboring states.

"I know we have gone ahead of Oklahoma. We are ahead of Mississippi. We are close to some of the other states. I don't think we have changed that much over the last decade," he said.

Key said Arkansas has had the same minimum teacher pay schedule since 2007 and "the department was very involved in working with the governor and with the chairs and the adequacy committee to say, 'Look, that is contributing to a continued discrepancy. We have to move that up.'

"Now we have had two sessions in a row where that has been moved not to the level that we would aspire to, but it has been increased for the first time in nearly a decade over the last two decades," he said.

Rep. Charlotte Douglas, R-Alma, asked Key whether he expects "some kind of flexibility from adequacy where we could make a statement that if there is monies to pick up this is how they should be spent to move us further ahead."

Key said lawmakers and the executive branch could do that, but "there is caution attached to that how those dollars would be spent."

Rep. Jeff Williams, R-Springdale, asked where Key would make budget cuts if the department doesn't get its funding request.

Key said, "The components of adequacy take priority over everybody else, frankly, in state government.

"We have the doomsday clause [in state law] where the General Assembly stated that education would be funded first, so anything that supports operations of the public schools as defined by the adequacy process will be funded. There will be no cuts," he said.