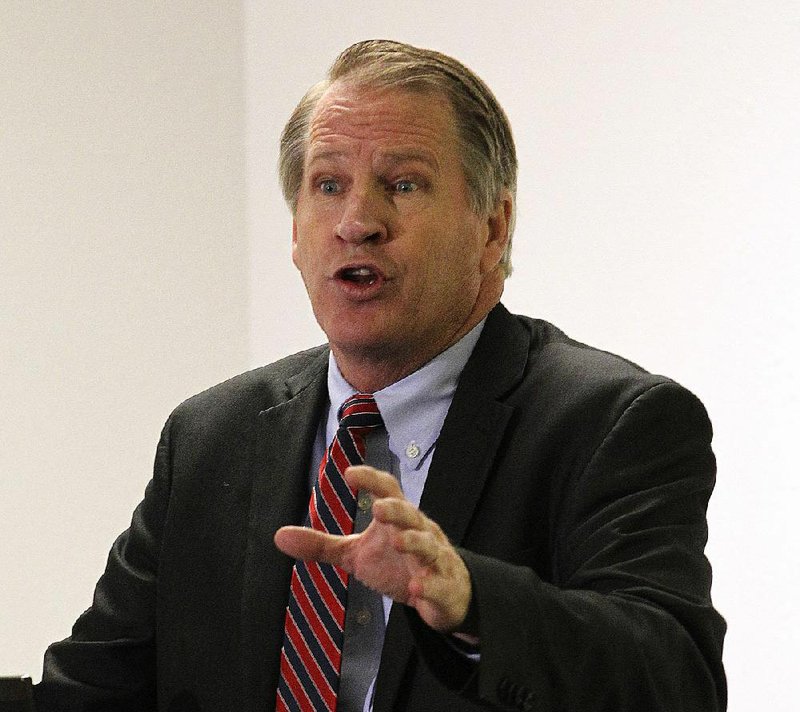 The North Little Police Department on Wednesday released video footage showing the fatal police shooting of a teenager after a struggle.

Charles Smith Jr., 17, died during an altercation with officers after a traffic stop shortly after 1 a.m. Sunday near East 52nd Street and Camp Robinson Road.

Police Chief Mike Davis said during a news conference Wednesday at the department's training building that the release of the dashboard-camera video footage was deemed necessary because of a "great deal of misinformation" spreading about the shooting on social media.

"I fear that misinformation gets out that says the subject wasn't armed, that the subject didn't shoot," he said, adding "that is not the case."

Davis shared little new information regarding the ongoing investigation during the news conference.

He said officers stopped a vehicle early Sunday that was traveling at an "excessive speed" and had a broken headlight.

The officers expressed concern over the "nervousness" of the driver while speaking with him, Davis said. Three people inside the car, including the driver, were asked to step out in the minutes that followed, the footage shows.

Authorities said a gun and a small bag of marijuana were found on Smith during a pat-down search. The video did not show police patting down Smith.

Davis said a stolen firearm also was later found on the driver's-side floorboard.

The video shows two people sitting on the curb as an officer's voice is heard off camera.

"Ain't nothing but a little bit of weed, man. Like for real, like if you tell us," the officer says. The sentence stops short, followed a second later by police telling the person not to reach.

"[I] ain't gonna find nothing else in here, right?" the officer says on video. "Quit reaching, partner."

As officers patted him down, Smith tried to "gain control" of a handgun and flee, at which time police took him to the ground, Davis said.

Smith enters the video's frame as an officer takes him to the ground.

"I can't go to jail," the teenager says on the ground, according to the video.

Smith eventually pulled the firearm from his waistband and fired one shot that almost struck the vehicle's other two occupants who were sitting on the curb, according to police.

As police continued to struggle with Smith, one officer is seen in the video hitting him.

"[Smith] is then observed engaging the slide back on the gun and again firing at officers, almost striking one officer in the face," the chief said.

About one second later, police open fire at Smith, the video shows. The teenager falls facedown on the curb, with the impact knocking the gun from his hand. He was pronounced dead at the scene.

"No officer wants to be put in this position, but these officers were left with no other choice but to protect their lives and return fire," Davis said.

He added that an investigation into the shooting should be completed "very soon." Findings will then be submitted to the Pulaski County prosecuting attorney's office for review regarding whether the use of deadly force was justified.

The North Little Rock Police Department -- one of a handful of departments in Arkansas that investigate such encounters in-house -- is conducting the investigation.

A separate internal inquiry is expected into whether department protocol was followed, according to police.

The officers involved in the shooting had not been identified as of Wednesday afternoon. Dedrick said previously that three officers were placed on paid leave, the procedure most law enforcement agencies follow in officer-involved shootings.

Police have not identified the two other people who were in the car with Smith.

During Wednesday's news conference, Davis advised media outlets to "exercise discretion" regarding the release of the footage to the public. Live streaming and recording of the video were not allowed during the news conference. Afterward, copies were provided to reporters.

S. Lee Merritt, a civil-rights attorney based in Philadelphia, is a lawyer for Smith's family and said in a statement that his office has been retained to gather evidence and evaluate the constitutionality of the use of force and "subsequent actions and/or inaction by law enforcement."

"Whenever a life is taken under the color of state authority it is a tragedy," he said in the statement. "Justice demands that the family of the decedent be treated with the utmost respect and be provided access to all available evidence in order to ensure accountability."

Merritt, in an interview, said the traffic stop appeared to stem from police profiling, and he mentioned that speeding is not an offense that requires everybody in the car to be searched. He called for the release of the full dashboard-camera video and argued that the portion provided Wednesday seemed to incriminate Smith and exculpate the officers.

The footage released Wednesday stops right after Smith is shot. Merritt said North Little Rock police told him that additional dashboard video footage does exist, and he'd like to see it.

If the additional footage has a legitimate investigative purpose, Merritt said, he would be open to viewing the footage with prosecutors.

"Without that, the family is left in the dark," he said.

In particular, Merritt said, he's interested in seeing what happened after Smith was shot and whether authorities rendered proper aid to the teenager. He said an Arkansas attorney will be working with him as local counsel in the case.

John Johnson, chief deputy prosecutor, said the Pulaski County prosecuting attorney's office met Tuesday with North Little Rock police officials and discussed the dashboard-camera footage. The office, he said, agreed with the decision to release the portion of the video. He added that the prosecutor's office could not force the Police Department to release any video associated with an investigation.

"It didn't seem like it would harm the investigation," he said of the video's release, mentioning that the prosecuting attorney's office is independent of the Police Department.

He said publicly releasing the footage of what happened after the teenager was shot would only cause "further emotional distress" for the family. He said the prosecutor's office agreed with the decision to release the footage because of the misinformation being spread about the shooting.

At a vigil Monday evening, Smith's family members and classmates described him as a fun-loving teenager who almost always wore a smile. A school district official said he was a senior at North Little Rock High School.

At the vigil, his mother, Crystal Irvin, said: "I never would have thought it would be my baby. He was nothing but 17 -- he wanted to graduate."