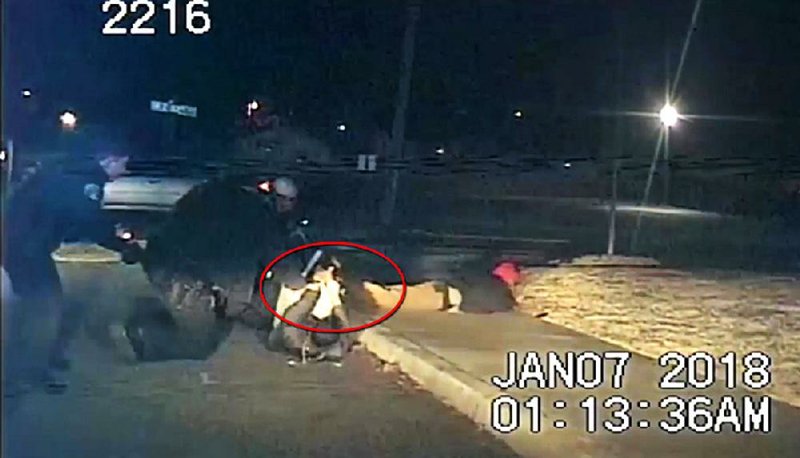 This screenshot from a North Little Rock Police Department video shows officers struggling with a teen gunman before he was fatally shot early Sunday. The oval was added to the video by the police to highlight the weapon involved.

Charles Edward Smith Jr., the North Little Rock teenager killed by police during an early Sunday exchange of gunfire, was under a court-ordered, 5 p.m. curfew when he died.

The curfew, which barred him from being outside his home at night, was a condition of Smith's release from jail last year as he awaited trial on charges that he had participated in three armed robberies in three counties -- Garland, Lonoke and Miller.

Victims were pistol-whipped in each of those holdups, which were committed by two to three masked robbers over a monthlong span, court filings show. In one of those robberies, police identified Smith as the robber who "manhandled" and beat a Hot Springs restaurant worker with a gun.

Records further show that Smith also was considered a suspect in at least three other holdups in Arkansas between Dec. 3, 2016, and Jan. 4, 2017. Smith turned 17 in April.

Smith, called Lil Boosie by his friends, apparently was not charged in those other robberies, but two of the suspects accused as accomplices were charged in four of the holdups.

In total, Smith and his friends were suspects in eight holdups in seven counties -- Faulkner, Garland, Hempstead, Lonoke, Miller, Pulaski and Saline.

Five of those robberies occurred over three days in December 2016.

Court records indicate Smith was arrested in early January 2017, but records aren't clear about when he was released, which could have been as late as June.

Garland County court records show Circuit Judge Marcia Hearnsberger imposed a 5 p.m. to 7 a.m. curfew in March as a condition of his release from jail.

Smith's petition to be tried in juvenile court over the Subway robbery allegations was denied by Hearnsberger in August.

In that case, three armed robbers rushed in, surprising clerk Austin Fain while he was in the back of the restaurant. The robbers made him open the register and safe, with one of them hitting him in the head with a gun before leaving with $573.

In denying Smith's transfer to juvenile court, the judge noted that photographs on his Facebook page show him and others flashing gang signs, with one of the pictures captioned, "I keep a couple killers round me when I moved."

Hearnsberger also stated that Smith showed no remorse when he testified before her at the juvenile-transfer hearing.

In the Texarkana holdup, two masked and gun-wielding robbers forced everyone in the Pizza Hut into a walk-in freezer and stole money out of the cash register.

The robbers pistol-whipped manager Justin Dainwood when he was unable to open the safe and also struck him with the cash register, according to police reports. They fled in a light-colored car driven by a third man, getting away with $123.

Also charged with Smith was Brennian Lamar Swanigan, then 17, of North Little Rock. Police described Swanigan as being very close to Smith, although the relationship was not detailed in the records.

On Nov. 28, the Texarkana charges against Smith were transferred to juvenile court by Miller County Circuit Judge Carlton Jones, who stated that he believed Smith could be rehabilitated, in part because the teen had no juvenile criminal history.

He did order that Smith be tried under the extended juvenile jurisdiction act, which would have allowed Smith to be sent to prison if he was not found to have been rehabilitated by the time he turned 21.

Swanigan's petition to be tried in juvenile court was also denied on Nov. 28 by another Miller County circuit judge, Brent Haltom.

Swanigan, Smith and 21-year-old Courtney Zyrone Johnson II, also of North Little Rock, were also charged in the Dec. 4, 2016, holdup of the VMart in Cabot.

Johnson has pleaded guilty to his role in the robbery in exchange for a 12-year prison sentence.

Court records show clerk Matthew Miller called police after three men in hoodies with their faces covered robbed the store. One of the robbers beat Miller with a gun when he was unable to open the safe. The robbers fled with two cartons of Newport cigarettes, 16 bundles of scratch-off lottery tickets worth $300 each and at least $400 from the cash register.

Smith's mother, 37-year-old Crystal Irvin, ran into legal troubles of her own in May when she was caught smuggling drugs into a Malvern prison unit for her former boyfriend, the father of one of her three daughters, records show.

Irvin pleaded guilty to furnishing prohibited articles, a felony, in September in exchange for five years on probation after telling investigators she thought she was taking tobacco to Nicholas Luster. Authorities said she gave the materials to the girlfriend of another inmate, who passed them to Luster.

Irvin said she'd gotten the contraband from a friend of Luster's in North Little Rock and had been afraid to deliver it to Luster at a May visitation but ultimately did as he asked, court filings show.

Records show that Irvin and Luster, 35, had a contentious relationship. She once accused him of trying to set her on fire. Luster was in prison at the time for second-degree battery on a North Little Rock policeman who had confronted him about harassing Irvin in December 2015. That conviction was Luster's 10th, court records show.

Print Headline: Teen was breaking curfew when stopped by police