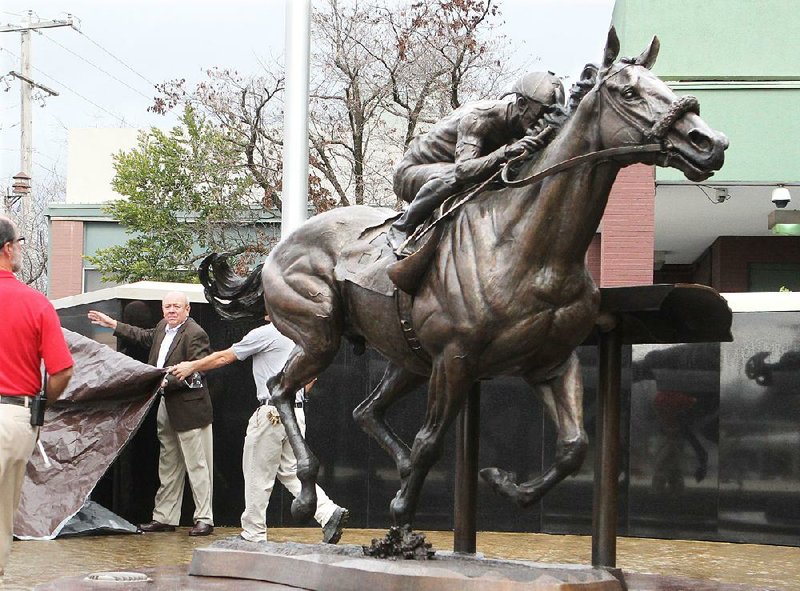 Oaklawn Park employees unveil a bronze sculpture of 2015 Triple Crown winner American Pharoah on Thursday. The statue, designed by James Peniston and commissioned by the late Charles Cella, will greet spectators in front of the grandstand entrance.

Oaklawn Park unveiled a life-size bronze statue of 2015 Triple Crown winner American Pharoah on Thursday in front of the entrance into the track's grandstand.

The bronze statue, by artist James Peniston, was commissioned by the late Charles Cella and is the focal point of a newly redesigned entrance to the grandstand. The new, park-like setting will greet guests in 2018.

"We are extremely honored," Justin Zayat said previously. Zayat is the son of owner Ahmed Zayat and Racing Manager for Zayat Stables. "Oaklawn has always been a track we love and have had great success at. Winning the Rebel and Arkansas Derby was a great foundation for American Pharoah and it was after his Arkansas Derby that we knew we had something truly special."

"This statue is not only a lasting tribute to American Pharoah, but also to my father, Charles Cella," Oaklawn President Louis Cella said previously.

Trained by National Museum of Racing Hall of Famer Bob Baffert, American Pharoah won the 2015 Rebel Stakes and Arkansas Derby to begin his 3-year-old season. He went on to become the first Triple Crown winner in 37 years before retiring at the end of the year after winning the $6 million Breeders' Cup Classic.

Hall of Fame jockey Gary Stevens will be a busy man when the Oaklawn meet gets underway today.

Stevens, 54, is named on 15 horses the meet's first three days. He will be riding for celebrated names like Hall of Fame trainers Steve Asmussen and D. Wayne Lukas and two-time Kentucky Derby-winning trainer Doug O'Neill.

Lukas and Stevens teamed to win the Kentucky Derby in 1988 with the filly Winning Colors and the 2013 Preakness with Oxbow.

Stevens has had 87 career mounts at Oaklawn, stretching from his first in 1985 to three last year. He is spending his winter at Oaklawn Park for the first time after previously being based in Southern California. Stevens breezed seven horses Sunday, including Streamline, among the favorites for Saturday's $125,000 Pippin Stakes for older fillies and mares.

The jockey's last stakes victory in Hot Springs came aboard Concept Win in the $150,000 Count Fleet Sprint Handicap in 1996. His first Oaklawn stakes victory came in 1985, when he guided Tank's Prospect in the Arkansas Derby for Lukas.

In between, Stevens won the Kentucky Derby twice (1988 and 1995), three Breeders' Cup races and countless other Grade 1 events, fueling his induction into the National Museum of Racing and Hall of Fame in 1997.

Eight horses for trainer Peter Miller and one for Hall of Fame trainer Bob Baffert arrived Wednesday following a flight that originated earlier in the day in Southern California.

The Baffert trainee, Mourinho, will be among the favorites for Monday's $150,000 Smarty Jones Stakes for 3-year-olds. The lightly raced son of Super Saver is coming off a runner-up finish behind Greyvitos in the $100,000 Bob Hope Stakes on Nov. 11 at Del Mar.

Greyvitos returned to win the $400,000 Springboard Mile on Dec. 17 at Remington Park.

Miller, who saddled two winners at last year's Breeders' Cup, including probable male sprint champion Roy H, has a string at Oaklawn for the first time in 2018.

For the fourth consecutive season, Oaklawn will offer a financial incentive to horses that win without running on the anti-bleeder medication Lasix, during the 2018 meeting, according to racing director David Longinotti. The "Lasix-free Bonus Program" will offer a 10 percent hike to the winner's share of the purse for horses that win without running on Lasix. Based on the opening-day purse schedule, the bonus will range from $1,200 for Oaklawn's minimum purse of $20,000 to $60,000 for the $1 million Arkansas Derby, the richest race of the meet. Four horses won races without Lasix during the 2017 meeting -- Dutch Parrot (twice) for trainer Will VanMeter, Prospector Fever for trainer Ray Shumake, Double First for VanMeter and Forever Fara for Hall of Fame trainer Steve Asmussen. ... Multiple Oaklawn stakes winner Whitmore and multiple stakes runner-up Petrov arrived Tuesday from Kentucky, trainer Ron Moquett said Thursday. ... Unbeaten Amy's Challenge remains on schedule to make her 2018 debut in the $125,000 Dixie Belle Stakes for 3-year-old fillies Jan. 20, trainer Mac Robertson said Thursday. ... Pin Oak Stable's Ready to Confess is under consideration for the $400,000 Houston Ladies Classic on Jan. 28 at Sam Houston and the $150,000 Bayakoa Stakes on Feb. 17 at Oaklawn, trainer Donnie K. Von Hemel said Wednesday. Ready to Confess ran fourth in last year's Bayakoa.

Information for this report was contributed by the Oaklawn media department.