UALR squeaks by after lead dissolves 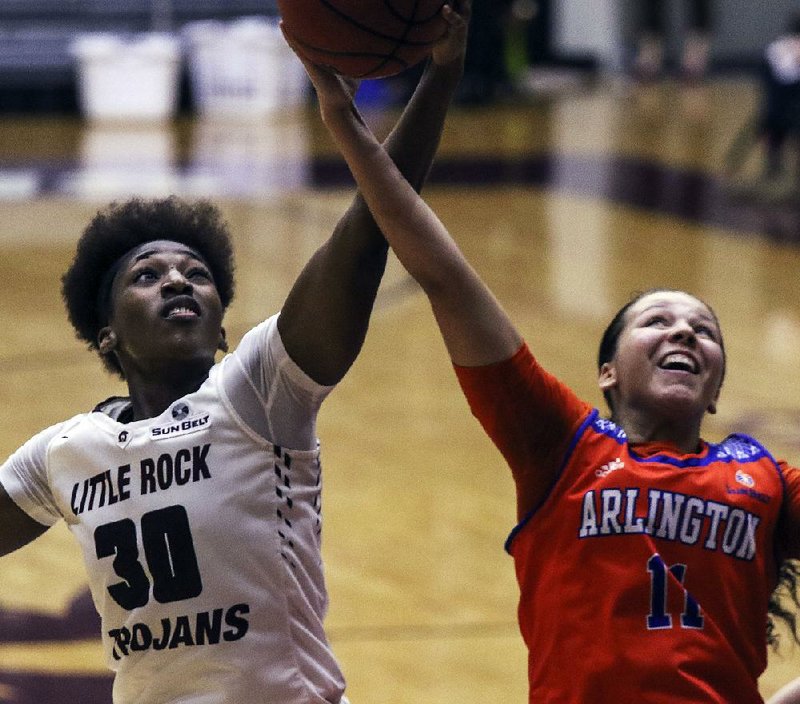 Ronjanae DeGray saw the last-second inbound pass sail over her defense and into the hands of a wide-open player near the basket. The junior forward closed late in a panic, almost certain the layup would be good, that overtime was coming.

The shot sailed over the rim, bounced off the glass and fell as the buzzer sounded.

UALR Coach Joe Foley walked toward DeGray, smiling. Her hands were on her head. The timeout prior, Foley had said UTA would run a lob play.

"Went out there, lob play," Foley said. "She missed the shot."

"I was disappointed," DeGray said. "I'm happy we won, but I'm disappointed in myself. We talked about it over and over again, and I let myself get beat on the back swing. Thankfully, she missed it."

The Tr0jans had built the lead with a 14-1 run that carried through halftime. DeGray scored seven of her team-high 14 points during the third quarter, when the Trojans turned an 8-0 run into a 45-35 lead with 3:32 left in the third.

VanDijk, who finished with 13 points and eight rebounds, was named the Sun Belt's preseason Player of the Year.

"The game plan was to strictly go out there and play good defense and run the floor," said graduate forward Keanna Keys, who finished with six points and three rebounds. "We knew they were just going to be in as good shape as we were, and we had to play our best game. And if shots weren't going, we had to put it in the post."

Both teams scored 22 points in the paint, and tight defense dominated the first portion of the game, when both teams missed a combined five shots.

Keys was positioned on VanDijk in UALR's Man defense, and the Lady Mavericks wouldn't score for the first two minutes of game play.

UTA had trouble reaching the paint, scoring just eight points in that area during the first half. Stellar play led to those points, including a pin-point backdoor bounce pass from senior point guard Miranda LeJune to senior guard Crystal Allen, whose layup gave UTA a 12-10 lead with 2:04 left in the first.

UTA junior forward Daiane Machado had to back down DeGray and draw a foul in order to score from the distance. Her free throw gave UTA a 20-19 lead with 6:39 left in the second period.

UALR kept pace but had not led since its first score of the game. The Trojans missed its first four three-point attempts of the second period, and the Lady Mavericks went on a 6-0 run to lead 28-21 with 4:15 left in the first half. The run was stopped when UALR sophomore forward Anna Hurlburt blocked her opponent, leading to a jump shot that spurred a 7-0 run to tie the game with 1:31 left.

DeGray tipped in an offensive rebound to give the Trojans a 30-29 lead at halftime.