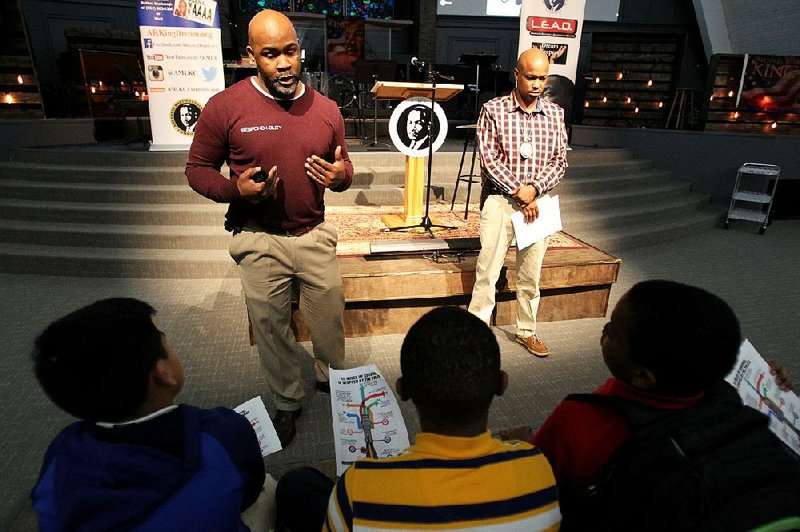 A group of mostly black youths learned how to interact with "real life Paul Blarts" and other law enforcement figures at a gathering Thursday in southwest Little Rock.

Under a stained-glass window in South City Church, Edmond Davis told students how to communicate with police. He's a historian who teaches at Arkansas Baptist College.

Blart, the fictional mall guard in the titular movie Paul Blart: Mall Cop, represents one of the many authority figures youths will meet over their lifetime, Davis told his audience.

The instructional session was part of Youth Speak Out, an afternoon event hosted by the state's Martin Luther King Jr. Commission and the state Department of Human Services.

Youth conferences have been held across Arkansas for the better part of a decade, said DuShun Scarbrough, executive director of the King commission.

Scarbrough said the state agencies wanted to hold one in Little Rock in part because of last year's spike in violence.

Little Rock saw 55 homicides last year, according to data kept by the Arkansas Democrat-Gazette. It's the highest yearly total in a decade.

"We're allowing the youth to talk this time," he added.

Laveta Wills-Hale, who sits on the King commission, welcomed elementary school students, preteens and teenagers after they filed into the church hall, carting lunchboxes and cartoon-themed backpacks.

King's devotion to knowledge should be an example to them, Wills-Hale told the students.

"He listened, he learned, he read, he studied. And he was a scholar," she said.

Children splintered into groups and rotated among 30-minute-long informative stations.

On the second-floor balcony, Idris Turner, a radio personality on Power 92.3 Jams, KIPR-FM, told young girls to "know your worth, and stick to it."

No one should feel pressure to be anyone's boyfriend or girlfriend, Turner said.

In the back of the church, a dozen kids clustered around laptops to bring virtual spheres of clay to life.

He showed students how to hover their cursors over the gray circle on their screens. They sculpted nostrils, eyebrows and lips from pixels.

"Who wants to make a monster?" Gordon asked.

"I already made one," answered Jaden, age 10, as he stared at the bulbous face on his screen.

"That looks straight-up like a monster," Jaden said, giggling.

Other sessions were less silly and more serious.

In the church sanctuary, Davis distilled "10 Rules of Survival If Stopped By the Police," which were developed by a Baltimore scholar, David Miller.

"Be polite and respectful when you get stopped by the police. Keep your mouth closed."

"Keep your hands in plain sight and make sure the police can see your hands at all times."

Davis was accompanied by Little Rock police detective Antwoine Hudson. The men told the students, almost all of whom were black, to have weekly discussions with their parents on how they should communicate with law enforcement officials.

"The most important thing is to prevent any misunderstanding," Hudson said.

Though "bad things happen" on occasion, law enforcement officers, in general, are "not out here to do anyone wrong," he later said.

Students and adults in attendance asked about recording traffic stops on their iPhones. Davis and students also play-acted the right and wrong way to act when under arrest.

One of the 10 tips Davis explained was, "Even if you believe that you are innocent, do not resist arrest."

"You fight that in court," he told students, "not on the streets."

As the afternoon wound down, older students sat on the altar and summarized the lessons for the younger students.

KLRT-TV news anchor Donna Terrell led the audience in a call-and-response, echoing King's principles of nonviolence throughout the church.

"Nonviolence ... believes that the universe ... is on the side of justice!" students shouted. 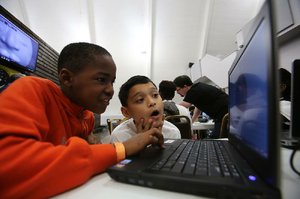 Photo by Thomas Metthe
Curtez Murry (left), 9, and Christopher Giron, 10, use a computer program to draw faces during the Life Skills for Youth gathering Thursday at South City Church in Little Rock.