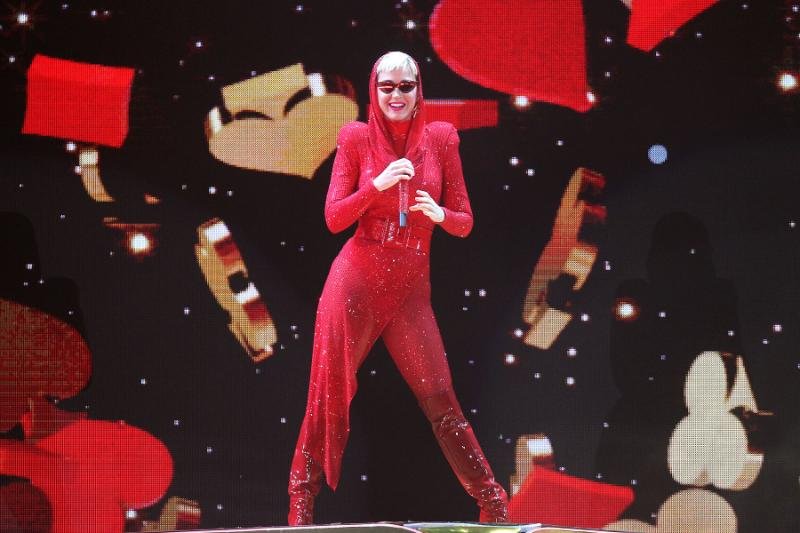 Katy Perry can sing, strut and serve up a spectacle. She can sink giant stage prop basketballs and soar on the rings of Saturn above a crowd, while playing guitar and wearing a sparkly Cher-esque ensemble and Cleopatra headpiece. She can execute a split at age 33 — and still get up.

But what the pop star — who performed before 10,270 “Katy Kats,” many wearing glowing feline ears, at North Little Rock’ s Verizon Arena Friday night — can’t do is a proper Razorbacks cheer. The team chant erupted when the personable Perry called her father — originally from Memphis — from the stage and he attempted the cheer. A stunned Perry asked an audience member what was happening.

“A hawwwg callll?” repeated Perry, who never visited Arkansas prior to this Witness: The Tour stop, with an exaggerated drawl. Although her 97-year-old grandmother was from this state that she playfully calls “Arkan-sass,” Perry is indeed one of those “California Gurls” she sang about. (And yes, lovable “Left Shark,” a sensation from Perry’s 2015 Super Bowl halftime show, did “fin-ally”show up at the end of the number.)

Perry, who seemed to be practicing for her upcoming judging gig on American Idol, spent a surprising amount of her two-and-a-half-hour set talking. She invited a little girl up to make a wish and she played ball with a dad. Such moments slowed the show’s momentum significantly, still they added sweetness and a bit of spontaneity to a highly calculated, choreographed and confetti-ed production that felt more circus than concert.

Perry, backed by five instrumentalists and two vocalists, sounded strong, belting hits like the sultry “E.T.,” the bubbly “Teenage Dream,” the spicy “Bon Appetit” (with welcome shots of Janet Jackson’s “What Have You Done For Me Lately”) and the robust “Roar” (with an unexpected Annie “It’s the Hard-Knock Life” intro).

Still, the music was secondary to the extravagant stage show. Where to even begin? The sassy, high-slit, red costume that Katy first wore? Her LED bra that lit up with lyrics/graphics? The larger-than-life dice (during “Roulette” ... wait, there’s no dice in actual roulette!) that dominated the show opening? The troupe of dancers wearing TVs over their faces with giant eyeballs on the screens? The towering flamingo puppets? The supersized salt and pepper shakers poured on Perry. The large lips that appear to swallow a harnessed, airborne Perry (“I Kissed A Girl”)? The male who used a tall flower prop for a pole dance? At least we know where to end — the fireworks on “Firework,” of course, the encore.

Opening the show was cute Carly Rae Jepsen, who kept it quick with a 30-minute set that culminated with catchy singles “Call Me Maybe,” and “I Really Like You.”

And that’s what happened — to borrow the title of a Perry song that was performed — “Last Friday Night (T.G.I.F.).”