Artists to participate in political ‘pop-up’ 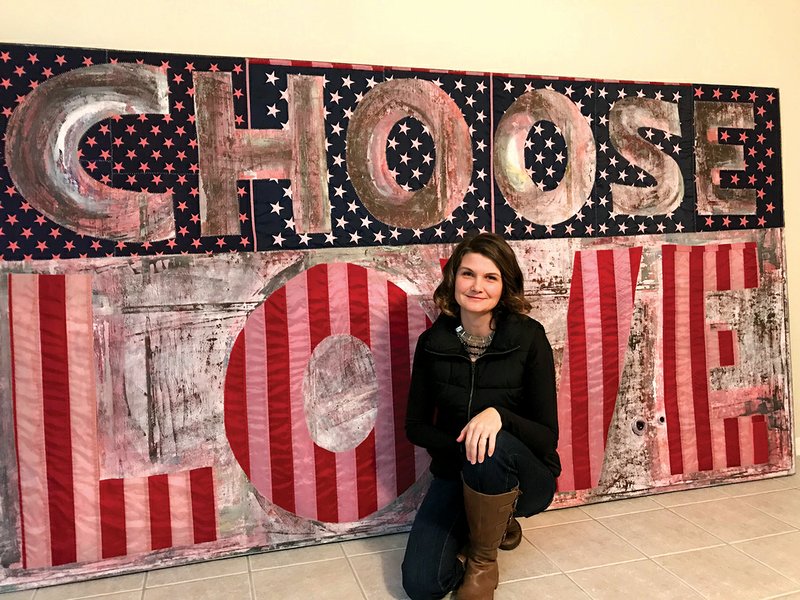 Melissa “Mo” Lashbrook of Cabot will display this large hand-sewn painting on canvas at the One Year Down: Artists Reflect on the First Year of the Trump Administration pop-up visual and performance event Friday and Saturday at New Deal Studios, 2003 S. Louisiana St. in Little Rock. She titles this artwork To Whom It May Concern.

CABOT — Two local artists — Melissa “Mo” Lashbrook and H. Kirk “Heather” Beckham — will participate in a political exhibition, One Year Down: Artists Reflect on the First Year of the Trump Administration, on Friday and Saturday at New Deal Studios, 2003 S. Louisiana St. in Little Rock.

Rachel Trusty of Conway, who teaches art at the University of Arkansas Community College at Morrilton, organized the pop-up visual art and performance event, which will feature poetry readings, as well as visual art. The event will be from 6-9 p.m. Friday, with poetry readings scheduled at 6:30, 7:30 and 8:30. The exhibition will also be open from 1-6 p.m. Saturday, the one-year-anniversary of Donald Trump’s inauguration as president of the United States.

“The March on Arkansas and the Rally for Reproductive Justice will be at the state Capitol from 11 a.m.

to 2:30 p.m. Saturday, so we are open for people to visit afterward,” Trusty said. “I’m excited that the show will open the night before these events and then be open afterward. The One Year Down exhibition is not officially affiliated with either the rally or the march, but I am excited to have this event during the weekend of positive events to begin 2018.”

Lashbrook has two pieces of her art in the upcoming show.

“Daily Medicine and To Whom It May Concern are my response to the overwhelming volume of hate oozing out of media outlets over the course of the first year under the Trump administration,” Lashbrook said.

“Daily Medicine is a meditation on personal choices made in private homes on a day-to-day basis,” she said. “This mixed-media work mimics a medicine cabinet stocked with glittering, colorful treatments. [Viewers are] challenged to consider diseases or deficiencies and how they are choosing to remedy them.

“To Whom It May Concern is a large banner stating the simple message, ‘choose love,’” she said. “Several American flags were disassembled, dyed and re-sewn to form the message. The destructive and reconstructive process represents my hopes going forward. It is a reminder to consider and select warmth and unselfish concern for the good of another. The work was created without regard for who receives it, person or institution.”

Lashbrook teaches art at both Southside and Northside elementary schools in Cabot. She graduated from the University of Central Arkansas in Conway with a Bachelor of Arts degree in fine art in 2003 and a Master of Arts in Teaching degree in 2013.

Beckham has one piece of art in the show, Looking to the Shouting Grounds, which she created using charcoal, conte crayon, gesso and pastel.

Beckham said she felt a “God nudge” telling her to submit work for the exhibit.

“This recent work is about boundaries — between life and death, between highs and lows of life and between people who walk away from us and those who walk into our lives, making them better, as have two of my Mexican friends,” she said.

“In working on Looking to the Shouting Grounds, I recalled my exasperation with Trump’s divisive language regarding those who are disabled, Mexicans and women,” Beckham said. “It irritates me that the Trump administration is pushing to spend $18 million over 10 years toward a boundary wall because I remember President Reagan saying, ‘Mr. Gorbachov, tear down that wall,’” referring to the Berlin Wall.

“We are a nation of people who have come into it both legally and illegally in order to move beyond circumstances, hoping to survive and to make a better life for their families and themselves,” she said.

Beckham, a native Arkansan, once lived and taught in southern New Mexico, 50 miles north of both El Paso, Texas, and Ciudad Juarez, Mexico, where her students were primarily a blend of Mexican-Americans, Mexican immigrants and Native Americans. She teaches in a school that has a high population of Latino students.

“It has been my experience that in both of those instructional settings, the portion of my students who are of Latino descent are not only more respectful individuals but also have high work ethics,” she said. “Who are we to build walls that denigrate humanity and drive apart people for cultural differences, for ability biases or for gender biases, when we should be looking to what Native Americans call ‘the shouting grounds,’ or our face-to-face experiences with God, and working to bring people together by appreciating differences and picking people up out of ‘graves,’ not putting more dirt on them.”

Beckham has a Bachelor of Science in Education degree with an emphasis in art from Arkansas State University. She works for the Little Rock School District.

Trusty said the One Year Down exhibition “seeks to follow in the history of art activism, not through propaganda or inflammatory cheap shots, but through a mature visual dialog and critic of the current political state. The call for entries was open to artists on both sides of the political aisle,” she said.

“In a ‘red state’ like Arkansas, it was important to give a platform to all voices in order to acknowledge a diversity of thought in our state that may not show up in overarching statistics. It was also important to approach this show in a bipartisan manner so that people from all positions were able to participate,” Trusty said.

“The works included in the exhibition discuss immigration, war and the volatility of our current foreign relations, climate concerns, race in America, the status of women and the #metoo movement, the death penalty and other pressing issues,” Trusty said. “In this time of exceptional partisanship, the hope for this exhibition is that it will not cause further tribalism, but through its inclusion of diverse viewpoints and issues, that the exhibition will encourage discussion and reflection.

“The works in the show are meant to be active participants in contemporary culture, pushing conversations forward and fostering positive social change.”