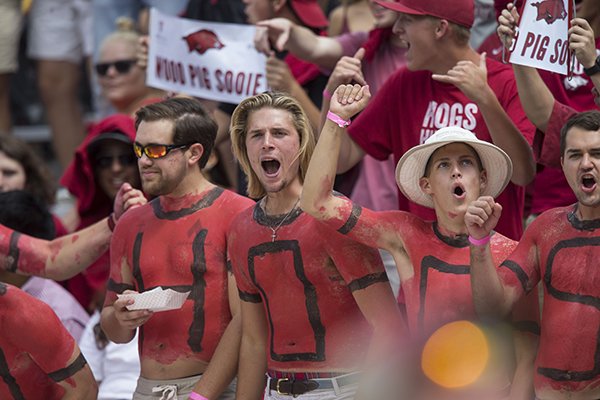 The Arkansas student section is shown during a game against TCU on Saturday, Sept. 9, 2017, in Fayetteville.

The University of Arkansas, Fayetteville athletic department pledged last summer to help its nonprofit fundraising arm collect more money from students "even if it's outside our job description," according to emails released under Arkansas' open-records law.

The campus, because it has more promotional might than the booster-funded Razorback Foundation, would better advertise the foundation's $15-per-year "collegiate membership" program going forward, Senior Associate Athletic Director Chris Freet told the nonprofit's director in an August email.

"We have a full-time marketing and communication teams, while RFI does not," Freet wrote, referring to Razorback Foundation Inc. "Even if it's outside our job description, we need to go above and beyond whenever possible."

The UA has long sold memberships to students on the foundation's behalf, an arrangement that raises the possibility that the nonprofit foundation -- which officials say can withhold records from the public because it receives no public money -- is receiving a university "subsidy," a freedom of information advocate said.

"That seems like a direct subsidy of the foundation by the university, in the form of serving as a revenue-collector for the foundation, unless the foundation is paying for this service," said Frank LoMonte, director of the The Brechner Center for Freedom of Information at the University of Florida.

A December open-records request for all standing agreements between the foundation and the university did not turn up a contract spelling out how the one-stop transactions work or how the money is distributed. UA's athletic department transfers collegiate membership dues to the nonprofit a couple of times per year, Freet said.

In response to emailed questions, Razorback Foundation Executive Director Scott Varady said students are informed before the purchase that the optional membership is with the foundation, not the university.

He said the foundation pays the contract for a third-party vendor that manages the online-purchasing system.

Varady also said it is in the athletics department's interest to "develop future private gift support" through programs such as the foundation's collegiate membership.

The athletic department does not receive money from the university's general fund, nor levy a student fee, meaning it is self-sustaining.

A collegiate membership is marketed as an optional add-on to tickets and is one of few Razorback Foundation "donations" that fans can pay through the UA ticket office. Students can buy season football tickets without making foundation donations -- in a stadium where Freet said donations are required for roughly two-thirds of the 72,000 seats.

The UA regularly emails the nonprofit spreadsheets with names and personal information for several thousand students who bought the collegiate memberships. That does not run afoul of federal privacy law that limits what student data can be disclosed and to whom, LoMonte said.

Freet, who oversees strategic communications and external operations, agreed to answer only questions that were submitted by email. In denying a telephone interview request, Freet cited the scope of the Arkansas Democrat-Gazette's reporting and said he would need time to prepare answers.

The newspaper has received about 1,800 pages of university emails through the partial fulfillment of an open-records request aimed at better understanding the university's day-to-day relationship with the foundation.

The request was submitted after the foundation refused to release records concerning how searches for a new athletic director and for a head football coach were conducted and how much money that turnover in personnel cost.

Varady has said the foundation is not subject to the Arkansas Freedom of Information Act because it does not receive public money and because its interests are independent of the university.

An Arkansas Supreme Court ruling in 1990 found that a private organization that operated as the "functional equivalent" of a public agency was subject to the Arkansas Freedom of Information Act. No one has sued the foundation for access to records.

Freet, in an Aug. 14 email to Varady, said he talked to university staff members about collegiate membership "and how we can better promote that key component," referring to the membership.

Freet reported that 61 percent of student season-ticket holders also purchased foundation memberships, up from 41 percent a year earlier. He asked Varady for a quarterly calendar of events for student foundation members, which would be "helpful in making sure we are meeting expectations on our end."

"Thanks for your help and the help of your team," Varady replied. "Everything is very helpful, and I will follow-up on the quarterly calendar issue and the other items."

Student membership is rewarded with T-shirts, priority access to tickets that are not part of the season-ticket package, and invitations to a crawfish boil and other events. Student members also begin accruing lifetime foundation membership points, according to a notice on the university's website.

Students can pay dues by clicking a box when they buy football and basketball season tickets -- an $85 package called Access Pass -- through the athletic department website.

The UA has "a long-term interest in promoting membership in the Razorback Foundation to generate private gift support for the department in the long-term," Freet said in response to questions, later saying that he instructed staff members to broadly think about how the program could be jointly promoted alongside tickets.

"We would be doing a disservice to our students if we did not inform them of the availability of the collegiate membership, and cultivate a connection to Razorback Athletics that would encourage them to become long-term supporters of the program," Freet said.

The Razorback Foundation, through a $12 million-per-year agreement with the university, requires that fans make donations to the nonprofit to secure most season tickets at various Razorback sports venues. For the most part, fans pay those donations directly to the foundation.

For example, people wishing to spend $225 for a single baseball season ticket near home plate can do so through the athletic department website. But they're notified that a Razorback Foundation invoice is coming by mail and that they must pay the nonprofit at least $3,000 per year and then $75 per seat in order to get the ticket. Not all seats in Baum Stadium require donations.

Aside from college students, an exception to the norm is the annual neutral-site football game between the Razorbacks and Texas A&M University, for which fans can pay for their tickets and foundation donations in one transaction.

Freet and Varady compared the approach with how the UA receives donations to support United Way, a charity.

Emails show that university and foundation officials have considered expanding the single point-of-purchase method into other areas, such as to new club seating that is part of the ongoing stadium expansion.

Clayton Hamilton, the athletic department's chief financial officer, in a September email to the foundation listed three lingering questions about expanding the Texas A&M game one-stop transaction to Razorback Stadium -- one of which was, "What if any FOIA implications this has?"

The UA currently has no plans to introduce the joint purchasing method to other seats, venues or games, Freet said.

Though the university shared the information with the Razorback Foundation, it would not do so with the newspaper, UA spokesman Mark Rushing said.

Institutions do not have to release the information through open-records requests, LoMonte said, because the U.S. Department of Education enacted a regulation in 2011 that allows schools to pick and choose who receives directory information and who doesn't.

"The idea, supposedly, was to allow schools to selectively address the types of releases that are the most bothersome to parents, which is generally to commercial marketers," he said. "I am very doubtful that the Department of Education actually has this authority, and I think the regulation would be vulnerable if challenged, because the federal government can't just go around willy-nilly giving states and cities and counties the option of obeying state laws or ignoring them."