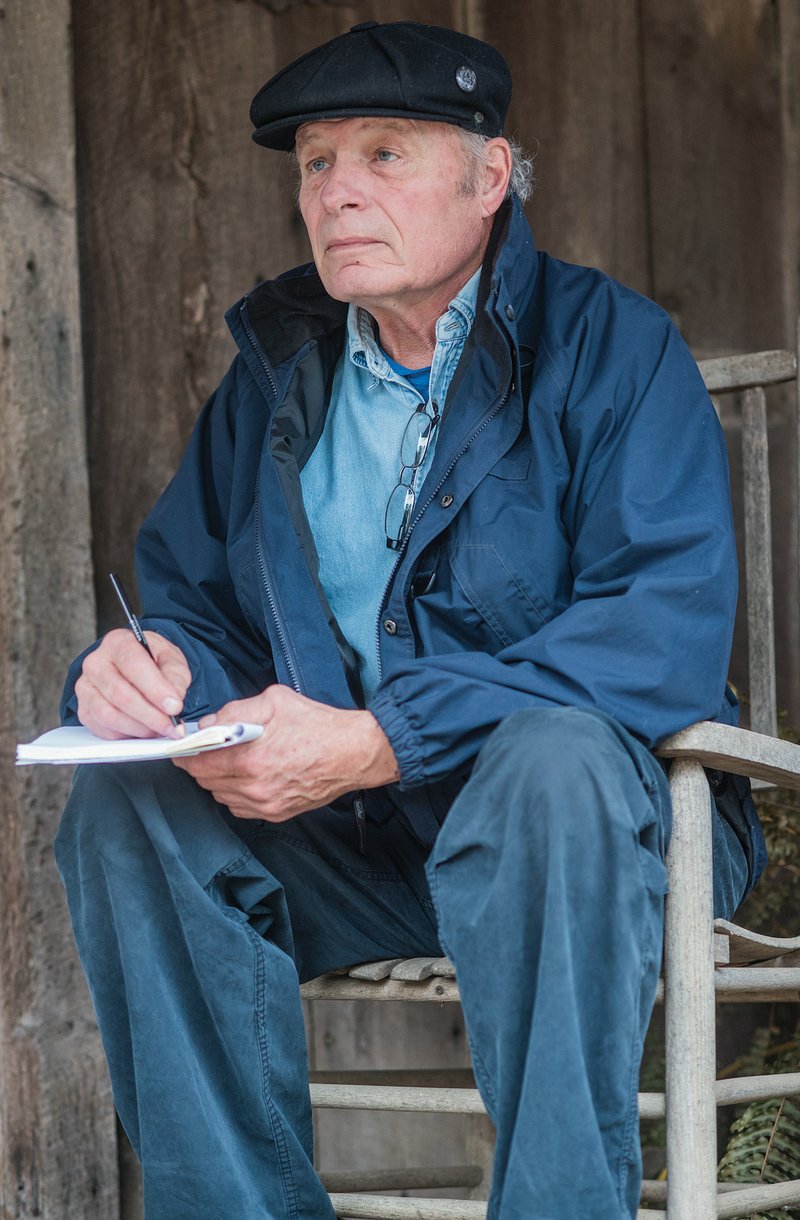 Bud Kenny, 69, of Hot Springs has been writing poetry for approximately 40 years. He will participate in the pop-up visual art and performance event, One Year Down: Artists Reflect on the First Year of the Trump Administration, on Friday and Saturday at New Deal Studios in Little Rock.

HOT SPRINGS — Two local poets — Bud Kenny and Kai Coggin — will participate in a pop-up visual art and performance event, One Year Down: Artists Reflect on the First Year of the Trump Administration, on Friday and Saturday at New Deal Studios, 2003 S. Louisiana St. in Little Rock.

Rachel Trusty of Conway, who teaches art at the University of Arkansas Community College at Morrilton, organized the event, which will feature poetry readings, as well as visual art. The event will be from 6-9 p.m. Friday, with poetry readings scheduled at 6:30, 7:30 and 8:30. The exhibition will also be open from 1-6 p.m. Saturday, the one-year-anniversary of Donald Trump’s inauguration as president of the United States.

“The March on Arkansas and the Rally for Reproductive Justice will be at the state Capitol from 11 a.m. to 2:30 p.m. Saturday, so we are open for people to visit afterward,” Trusty said. “I’m excited that the show will open the night before these events and then be open afterward. The One Year Down exhibition is not officially affiliated with either the rally or the march, but I am excited to have this event during the weekend of positive events to begin 2018.”

Kenny will read a poem he created for this event, “When the King Speaks.”

“I got involved with this event because I am not happy with what’s going on and feel very strongly that what the president is doing is not wise. Our country should be inclusive, not exclusive. Our country is a network of immigrants,” Kenny said.

“Also, I think we need to take care of our environment. If we don’t, who will?” he said. “We need to be good stewards of the land, not polluting our streams and rivers. What does shooting grizzly bears in Alaska from the air have to do with helping us or our economy?

“I’m very nonpolitical. I vote both sides of the ticket. I vote the man and not the party, but I think with this administration, we are going backward, not forward.”

Originally from Ohio, Kenny founded the Wednesday Night Poetry Readings in Hot Springs in 1989. He is still involved with the group, which has met continuously since 1989. He also had his own business for a while, The Poet’s Loft in downtown Hot Springs.

Kenny came to Hot Springs 40 years ago after a 3 1/2-year walking trek across the United States with a dog and a pack pony. He and his then-wife set off on another walking trek in 2001.

“In 2001, I left Hot Springs with my then-wife and a mule and spent 2 1/2 years walking to Maine, doing roadside poetry shows along the way,” he said. Kenny wrote a book about his trek titled Footloose In America: Dixie to New England.

“I am also working on my first novel, The Sundowner,” Kenny said. “It’s about a rich man who has his mind during the day but loses it at night. It’s a hilarious story.”

Coggin will be a co-host of the live-poetry-installation aspect of the One Year Down exhibition.

“On Friday night, there will be 13 poets, including Karen Hayes [of North Little Rock and the other co-host] and me, who will be performing/reading selections of our work written in the past year, on various issues relevant to the current political and social climate,” Coggin said.

“The visual exhibition will be on display during all of this. This is where most of my hosting will happen, as I will be introducing all of the poets and segueing between them, as well as reading some of my own poems,” she said.

“Saturday, Jan. 20, is the one-year anniversary of the inauguration that prompted forms of artistic resistance across the country,” Coggin said. “On Saturday afternoon, after the Women’s March and the Rally for Reproductive Justice March being held in Little Rock, the One Year Down visual exhibition continues, while Karen and I will engage in Poetry Talk Backs; poetry will be written live on typewriters in response to audience reflection cards gathered the night before about the Trump administration.

“These poems will be read and displayed, all very impromptu and fresh, with attendees also participating in the creative process.”

Coggin said she became involved with this event when Trusty and Hayes approached her about the idea.

“It fit right into my mission statement as a poet and a social-justice voice. I write and fight against injustice and oppression. I write and fight for many intersectional causes that need public attention,” said Coggin, who taught school in Houston, Texas, before moving to Hot Springs to pursue life as a poet.

“For most of 2016 [during the divisive campaign] and during all of 2017, I have lent my passion and my poetry to the plight of all of the Americans that made up the popular vote, those who did not want this administration to ever come into power,” she said.

“There have been enormously damaging legislations passed since inauguration day 2017 — withdrawing from the Paris Accord, unconstitutional travel bans, taking away the dreams of 800,000 DACA-protected innocent young people, deregulating companies that allow harmful contaminants and poisons to rob the future from our children. … The list goes on and on, more so every day,” Coggin said.

“What do artists do when these detrimental laws come into existence and narrowly pass through our government? What do we do to combat these injustices? What do we do to resist? How do we stand up and fight?” she asked.

“We paint. We sculpt. We create. We dance. We sing. We write poems until our pens scratch so many words of light and defiance that a fire starts on the page that spreads like a wild flame to light the way for others like us without a voice or a form of expression. If you look for the real history of the people during any time in history, look at the art. Read the poems. The body of work that is being created during this time is incredible,” she said.

“One Year Down is a direct reflection and outlet for some of this work to come into public view, to illuminate the public sphere and to create dialogue and provide hope in a time of relative darkness,” Coggin said. “That is what art does. … It is my honor and my purpose to always participate in this discourse, to stand up against injustice, to write for the marginalized voices that are not given the platform to have their voices heard.

“I am humbled to stand beside so many talented central-Arkansas visual artists and poets to make our voices and hearts heard as we renew our pledge to stand on the right side of history.”

Trusty said the One Year Down exhibition “seeks to follow in the history of art activism, not through propaganda or inflammatory cheap shots, but through a mature visual dialog and critique of the current political state. The call for entries was open to artists on both sides of the political aisle,” she said.

“In a ‘red state’ like Arkansas, it was important to give a platform to all voices in order to acknowledge a diversity of thought in our state that may not show up in overarching statistics. It was also important to approach this show in a bipartisan manner so that people from all positions were able to participate,” she said.

“The works included in the exhibition discuss immigration, war and the volatility of our current foreign relations, climate concerns, race in America, the status of women and the #metoo movement, the death penalty and other pressing issues,” Trusty said.

“In this time of exceptional partisanship, the hope for this exhibition is that it will not cause further tribalism, but through its inclusion of diverse viewpoints and issues, that the exhibition will encourage discussion and reflection,” she said. “The works in the show are meant to be active participants in contemporary culture, pushing conversations forward and fostering positive social change.”