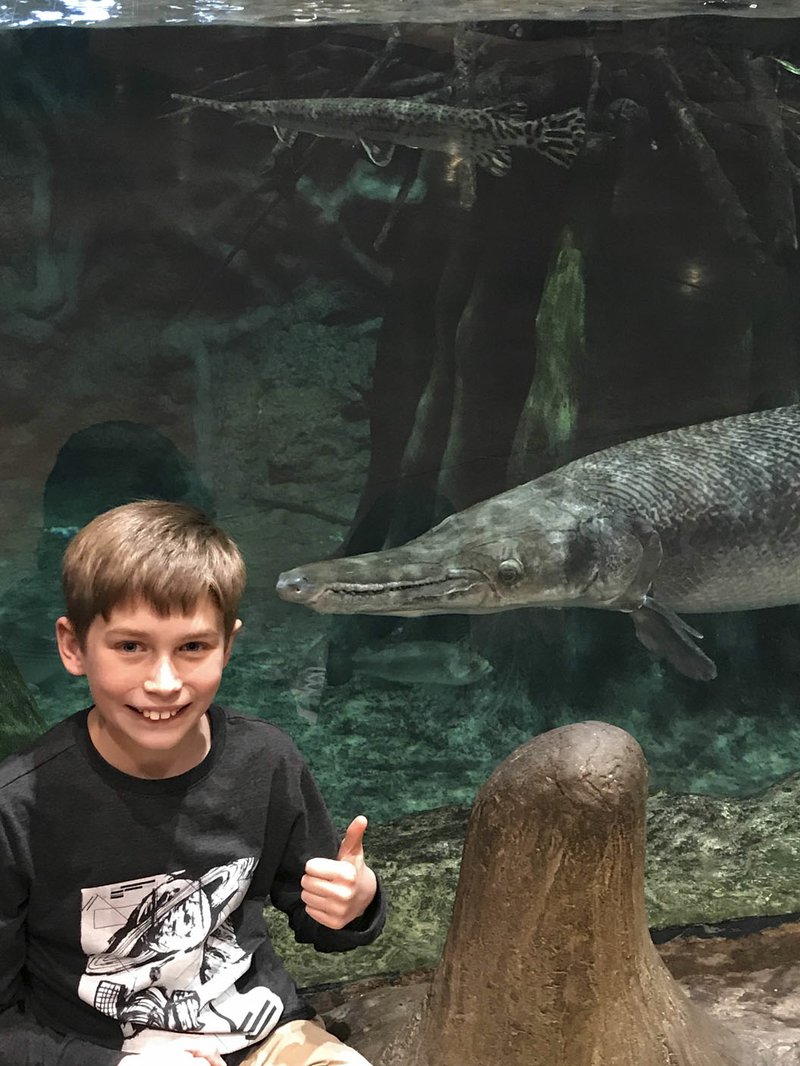 At an aquarium in Springfield, Mo., Henry Foster points to an alligator gar, a species he’d like to see exalted in Arkansas.

A 10-year-old Fayetteville boy has been lobbying for an Arkansas state fish.

His nomination? The alligator gar.

Henry Foster said Arkansas would be unique because no other state so honors the alligator gar, which can grow to be several feet long and weigh hundreds of pounds.

Henry said he doesn't want Arkansas to be a "copy cat" by picking catfish, bass or trout, as other states have done.

"I also like the way it looks," he said of the gar, which has a snout like a gator and caninelike teeth.

The alligator gar is sometimes called a "living dinosaur" because it's been around for 100 million years and looks the part. It's the largest freshwater fish in the Mississippi River Valley.

Lindsey Lewis of Conway, a fisheries biologist, believes Hernando de Soto and his men ate alligator gar with the Indians during their 16th- century Arkansas exploration. A journal of the expedition describes a fish "the size of a hog" with "rows of teeth above and below." Lewis said the alligator gar is the only Arkansas fish that would fit that description.

Henry wrote five Arkansas legislators on Dec. 29 and started a petition drive Monday at change.org. Seven hundred people had signed the petition as of Friday afternoon.

Arkansas is one of only four states that doesn't have a state fish, Henry wrote in the letter.

In touting the alligator gar, Henry wrote that:

• It's threatened in Arkansas.

• And it can be found "scattered" throughout Arkansas.

As a runner-up, Henry suggested the yellowcheek darter, which is endangered and can be found in only four forks of the Little Red River in Arkansas, according to the U.S. Fish and Wildlife Services.

Henry has gotten bipartisan support for his proposal. State Reps. David Whitaker, D-Fayetteville, and Charlene Fite, R-Van Buren, said they will work on a resolution naming the alligator gar as the Arkansas state fish during the next regular legislative session, which will be in 2019.

"I think it's wonderful," Whitaker said. "I'm really impressed with the young man's initiative and the level of research he's put into it. He speaks very passionately about it."

State Rep. Greg Leding, D-Fayetteville, said he would be happy to support the proposal if asked to do so. Leding, who is running unopposed for the state Senate, said his only reservation is that Arkansas is third in the nation in catfish production, so catfish farmers might want the whiskered critter to be the state fish.

But that proposal came up in the Legislature in 1995 and lost by three votes.

"During debate, the catfish was derided as a scum-sucking bottom-feeder," wrote John R. Starr in his March 7, 1995, column for the Arkansas Democrat-Gazette. The catfish might be an appropriate mascot for the Legislature, he wrote.

Charles "Bo" Collins of Mena, executive director of Catfish Farmers of Arkansas, said he wouldn't oppose the alligator gar as state fish, but the Legislature might want to look at a few other species -- including largemouth bass and crappie -- before making a final decision.

"I'm sure if you decide on one, you'll have people say 'Why did you pick this one?'" Collins said. "I think it would be hard to come up with just one because we have so many species of fish that are popular in this state with the anglers."

Mark Spitzer, associate professor of creative writing at the University of Central Arkansas, said he was happy to hear of Henry's alligator gar proposal. Spitzer has written two books about alligator gar, Season of the Gar and Return of the Gar.

The subtitle of Season of the Gar is "Adventures in Pursuit of America's Most Misunderstood Fish."

The alligator gar doesn't eat twice its weight every day in game fish, as once thought, Spitzer said. Instead, it eats mostly rough fish, like drum, carp, buffalo and shad -- the kind that eat the eggs of game fish, he said.

"What they really have a potential to do is cut down on these invasive Asian carp we have," Spitzer said.

Alligator gar have been featured on the Animal Planet television show River Monsters. But Spitzer said they're not monsters at all.

"I wouldn't say they're ugly," he said. "They've just got all those teeth that everybody's afraid of. And if you look closely, they're always smiling. Happy, smiling fish."

Spitzer said efforts have been underway since about the turn of the century to re-establish the alligator gar population in Arkansas. He said fishing decimated the population during the late 1950s.

Spitzer said there are a few thousand alligator gar in Arkansas now.

By comparison, there are millions of largemouth bass in the state, said Eric Brinkman, Arkansas Game and Fish Commission district fisheries supervisor for southwest Arkansas.

He said Arkansas alligator gar fishing was very popular in the 1940s and 1950s.

"People came from all over the world to fish for these things in Arkansas," said Brinkman, who is also chairman of the commission's alligator gar species management team.

He said having the alligator gar as the state fish could help preserve the species.

Brinkman said it's legal to fish for alligator gar in Arkansas, but a permit is required. He said about 500 people get the permits every year, and about 25 alligator gar are harvested in Arkansas each year, usually by people bow hunting.

Leding did a podcast with Henry and wrote about the alligator gar proposal on his Facebook page, where the hashtag #GARkansas was soon trending.

"There are a few people who are hating on the gar," Leding said. "And I have to admit, when I first got Henry's letter, I thought, 'The gar?'"

Arkansas has four species of gar, and some have argued that the longnose gar would be a better choice as state fish because it's found throughout Arkansas, whereas the alligator gar's history in the Ozarks is patchy at best.

But Leding had a response to that argument.

"Far as we know, you can't find diamonds outside Murfreesboro, and that didn't stop them from being named our state gem," he wrote on Facebook.

Lewis said the alligator gar may have lived in the Ozark Mountains before dams were built along the White River. He said it may have been found as far into the Ozarks as Bull Shoals Lake and the lower Buffalo River.

"They're despised by some people because of the vast numbers of them and their feeding on popular fish," he said. "I can't see the public or anybody really being supportive of the longnose gar."

But the foot bones of "Arkansaurus fridayi," which were found in Sevier County in 1972, are the only dinosaur bones ever found in Arkansas that have been brought to the attention of the scientific community, according to the Encyclopedia of Arkansas History and Culture.

So it was a shoo-in for state dinosaur.

Leding thinks the state-fish issue will be more controversial.

"I think more people will weigh in on this than the dinosaur," he said.

Leding and Fite said students perk up when they hear that one of their peers got the dinosaur designation for Arkansas.

"I think something like this would serve to engage more students," Leding said. "You read about bass, I mean, yawn." 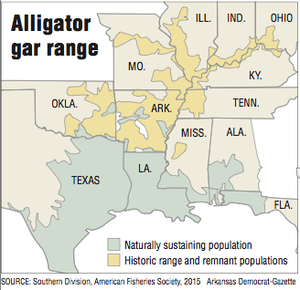 Print Headline: Schoolboy has a line on official state fish