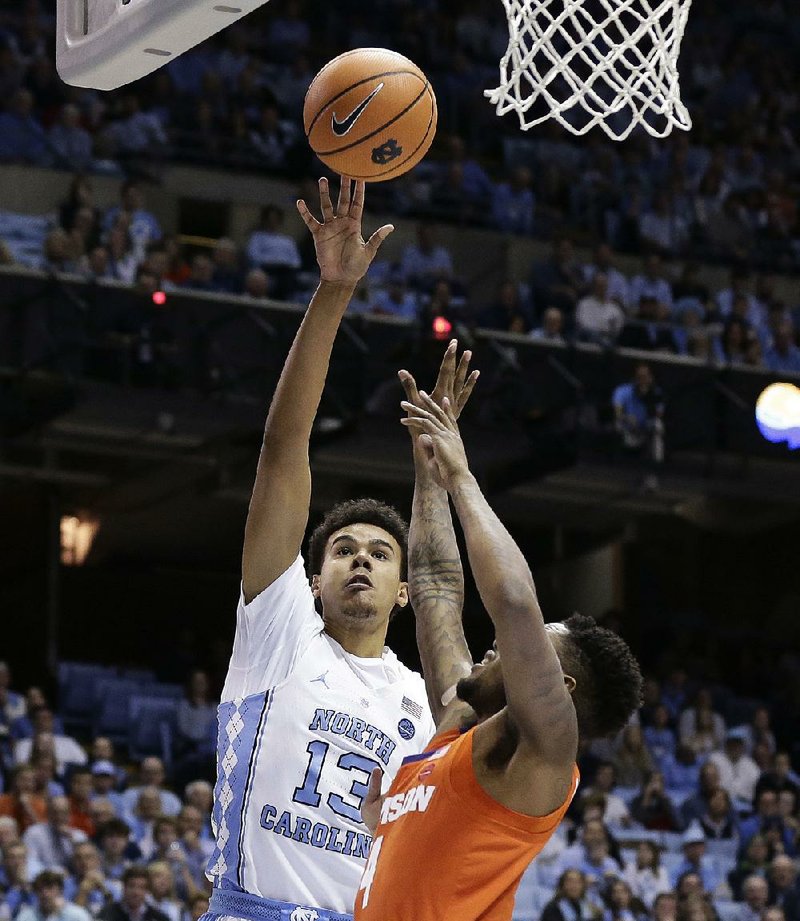 North Carolina guard Cameron Johnson (left) had a season-high 21 points in No. 15 North Carolina’s 87-79 victory over No. 20 Clemson on Tuesday night in Chapel Hill, N.C.

Joel Berry II scored 14 of his 17 points after halftime for the Tar Heels (15-4, 4-2 Atlantic Coast Conference), who hung on despite seeing most of an 18-point lead erased by Clemson's outstanding second-half shooting.

Luke Maye added 11 points while playing with a stitched-up cut on his nose suffered shortly before halftime.

The victory improved the Tar Heels to 59-0 all-time at home against Clemson, including 28-0 in the Smith Center. It's the longest home winning streak against a single opponent in NCAA history.

Marcquise Reed scored 21 points for the Tigers (15-3, 4-2), who made 15 of 16 shots out of halftime and closed within two points in the final 10 minutes three separate times.

The Boilermakers (18-2, 7-0 Big Ten) have won 14 consecutive overall, 19 in a row at home and have matched the best 20-game record in school history. The only other time Purdue did that was 1987-88 when it also won its first seven conference games.

UCF (12-6, 3-3) got seven points apiece from Tacko Fall, Terrell Allen and Dayon Griffin, but struggled the entire game to get inside the Bearcats defense. UCF shot just 30 percent for the game and committed 14 turnovers.

Cincinnati, which has suffered slow starts in its last three games, overcame this one by using speed in transition to beat the Knights down the court. That was especially effective when Fall, UCF's 7-foot-6 center, was on the bench, which he was when Clark made a layup to put the Bearcats ahead for good with 13:40 left in the second half.

UCF made a brief run when Fall got six consecutive points on two dunks and a layup to cut the deficit to 39-36, but the rally died when the Knights center missed two free throws on the next possession.

Clark took an alley-oop pass and slammed it home at the other end to push Cincinnati's lead to 45-36 with 3:52 left in the game and UCF never got closer.

Vanderbilt (6-12, 1-5) was led by Ejike Obinna's 14 points. Jeff Roberson added 10 points for the Commodores, who have dropped four consecutive.

Both teams struggled offensively in the opening minutes as they were a combined 2 of 15 from the floor in the first five minutes. The Bulldogs maintained a lead for most of the first half. Weatherspoon scored six as Mississippi State closed with a 12-2 run to lead 37-25 at halftime.

The Bulldogs shot 41 percent in the first half, while the Commodores were a bit better at 42 percent. Mississippi State only had one turnover at intermission, while Vanderbilt had six.

The Tigers (11-6, 2-3) pulled ahead 60-59 on a basket by Duop Reath with 39 seconds left, and the game-winning field goal followed an offensive rebound by Juwan Parker with 23 seconds to play.

Maten was held scoreless for the first 17 minutes of the game, but finished with a game-high 21 points. Maten scored 17 of Georgia's 37 second-half points, and grabbed 12 rebounds. Derek Ogbeide added 11 points for the Bulldogs (12-5, 3-3).

Brandon Sampson led the Tigers with 17 points. Reath added 12 points and Skylar Mays had 11. Waters, who was averaging 16 points a game, was held to six points.

MORGANTOWN, W.Va. -- Svi Mykhailiuk scored 17 points, including 12 over the final seven minutes, and Kansas roared back from a big deficit to beat West Virginia.

Kansas has won four consecutive and broke a four-game losing streak in Morgantown to West Virginia (15-3, 4-2). The Mountaineers have lost two consecutive for the first time this season.

Sagaba Konate had 16 points, 10 rebounds and 5 blocked shots for West Virginia, but he didn't score over the final seven minutes. Esa Ahmad added 15 points and Jevon Carter scored 14 for the Mountaineers.