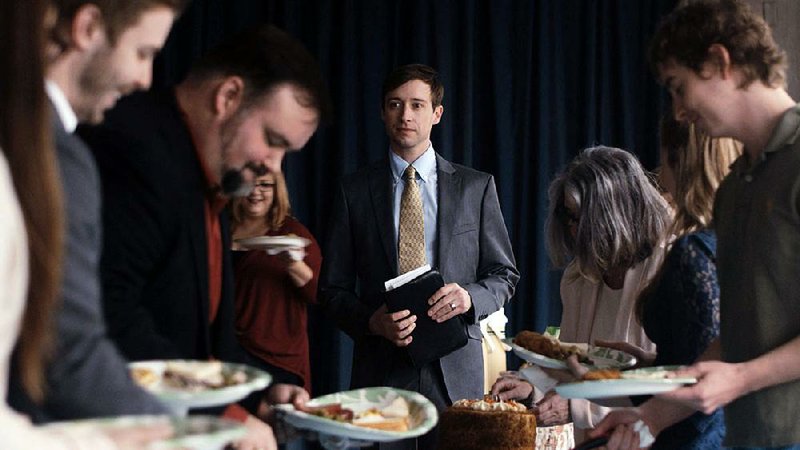 The Revival, directed by immensely capable Hot Springs native Jennifer Gerber, at first seems as comfortable as the pattern and texture of a well-worn flannel shirt. The characters are everyday sorts, agreeable but not breathtakingly beautiful. The semi-rural settings are familiar in a slightly run-down sort of way. The dialogue sounds like the exchanges that actual people might use to communicate.

So if it's so natural, what differentiates this film from merely observing the idle goings-on in any quiet Southern town?

It doesn't take long to figure that one out. The quiet rollout of the plot (adapted from a 2010 play by Samuel Brett Williams, a longtime friend of Gerber's), to the tune of entrancing shape-note singing (by the Sacred Harp Singers of Cork), concerns a determined young Harvard-educated preacher named Eli (David Rysdahl) who's convinced that his intellect and progressive ideas will revitalize his late father's near-failing evangelical church and attract scads of new worshippers. This approach isn't working the way Eli expects it to; his congregation seems baffled by his sermons.

This sounds like a situation that will probably resolve itself in time. But rather than wallow in going nowhere, the story gains momentum in a hurry. That's because, during a post-service potluck, Eli encounters a brooding young drifter named Daniel (Zachary Booth) in need of a meal. Much to his consternation, Eli feels a powerful attraction for the newcomer. And the feeling's mutual.

The escalation of their forbidden relationship is a tense plot point that runs parallel to the pushy insistence of church board member Trevor (Raymond McAnally), an affable, bossy recovering alcoholic, to stage a full-bore revival in competition with those of nearby mega-churches. Both situations cause increasing tension for Eli. He handles it badly, which affects his delicate relationship with his pregnant wife, June (Lucy Faust), who knows a thing or two about life in a home where love is hard to find.

As emotion busts loose of its confining tethers, so does the physicality of the film. Fettered by the restrictions of his upbringing but yearning to satisfy desires he can't control, Eli is forced to make some difficult decisions. The ending (which Gerber changed before screening the film at the 2017 Kaleidoscope Film Festival in Argenta, then changed it back to the original at the urging of the distributor) pulls no punches in revealing how far a man can go in an effort to regain control, even if that control forces him into a life he may come to regret.

Compelling as the plot is, the performances in The Revival are so strong that they smooth out any awkward passages. Rysdahl finds a sympathetic streak in his stubborn, often contrary character. Booth offers a slow-burning sexiness mixed with the burden that comes with lack of opportunity in his portrayal of Daniel. And petite, soft-spoken Faust bursts out in a harrowing scene in which June gives Eli what-for concerning his behavior, her expectations, and their future.

The look, achieved by John Wakayama Carey to reflect a simple beauty of the surroundings, is the finishing flourish of a film that delivers a punch nobody will see coming.