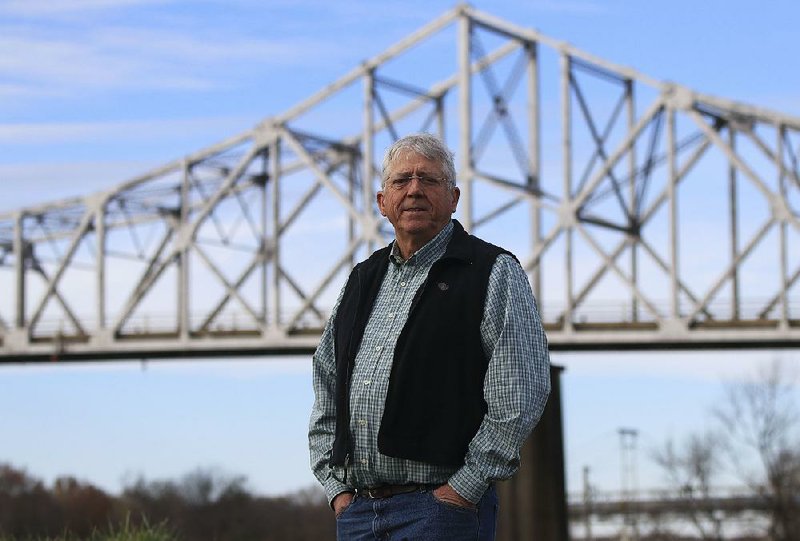 Clarendon Mayor Jim Stinson III stands in front of the nearly 87-year-old bridge that until a couple of years ago bore U.S. 79 traffic through the lush wildlife refuges of the White and Cache rivers. ( Staton Breidenthal)

CLARENDON -- There's a problem with the town's water tower. It's 35 years old, and it leaks.

The repairs will likely cost this small Delta town more than $325,000.

"There are no grants for that," says Mayor Jim Stinson III.

Pursuing grants is a skill Stinson honed after taking the mayor's seat from incumbent Donald Branch in 2010. During his two terms, Stinson has patch-worked funding for the town's needs: A $250,000 grant to pave the east side here and a $425,000 loan to repair the sewer line there.

A drive through the eastern Arkansas town -- nestled between Marianna and Stuttgart down U.S. 79 and the county seat for the mostly rural Monroe County -- is rampant with the peeling paint and busted windows of abandoned storefronts.

Shuttered factories and mills line the river rolling along the west side.

As Stinson -- dressed in a green-plaid shirt and bluejeans -- vigorously cuts into the fried pork chop that sits next to greens and cornbread on his plate, he nods to greetings of "Mayor" from the door of Bendi's Diner on North Sixth Street.

It's not a secret that the town is struggling, he says.

"Let's face the fact that we're not going to get a big factory here," Stinson says.

He suspends his fork midair, then punctuates his words with his knife in his right hand: "But what we have right here in Clarendon is an uncut diamond!"

The center of the "diamond" is a narrow, nearly 87-year-old steel bridge that spans the White River at Clarendon proper and serviced a narrow, two-lane highway, adorned with ornate concrete railings, for nearly 3 miles through the lush national wildlife refuges of the White and Cache rivers.

The old bridge is no longer open to traffic, having been replaced in 2016 with a much wider $60.8 million bridge.

Stinson points to the west wall of the restaurant.

"I can see that old bridge, 10 or 15 years from now," he says. "A bicycle and pedestrian walkway. You know, we can have picnic tables up there. People can stop and take a rest and look out into the woods. Bird watching. It will be great."

"Tourists. Spend. Money." Stinson says, with a hard pause after each word.

But first they have to save it.

BOOTS ON THE GROUND

Bids for demolishing the old bridge were opened Wednesday at the Arkansas Department of Transportation office in Little Rock.

This was the second time that bids were solicited to tear down the U.S. 79 bridge. In 2016, the state highway department voluntarily withdrew the project after Gov. Asa Hutchinson urged the agency to allow a pending court case -- an attempt to save the old bridge -- to run its course.

Today, the battle in federal court continues against the highway department as well as the U.S. Fish and Wildlife Service and other federal and state entities. On Tuesday, eight Monroe County residents asked the state's circuit court system to temporarily halt demolition until the legal battle is over.

While Century Construction Group was the lowest bidder, it could take up to a week to vet the documents for accuracy and to ensure the contractor is capable of fulfilling the contract, said state Department of Transportation spokesman Danny Straessle.

The bridge's removal from start to finish is scheduled to take 300 working days. But first, officials have to decide how the bridge will be demolished: wrecking ball versus dynamite.

"Typically, from the time we award the contract, it takes three to six weeks before you see boots on the ground," Straessle said. "We feel that we have been a good neighbor to the community and to the interested parties, but we are moving forward. There's nothing that's keeping us from tearing down the bridge."

Stinson said the fight isn't with the state highway department.

"The highway department has been very gracious," Stinson said. "They've cooperated with us; the [U.S.] Department of Interior is not cooperating with us."

But he is adamant, "We're not giving up."

The fight to save the bridge began in 2013, about six years after an agreement was reached between the city of Clarendon, and the state highway department and the U.S. Fish and Wildlife Service to demolish the old bridge in exchange for the new one.

The old bridge needed to go because its western approach crossed part of the 56,000-acre Cache River National Wildlife Refuge -- which was established in 1986 to protect wetland habitats and provide feeding and resting areas for migrating waterfowl.

To balance the ecological impact and the floodplain, the new span would go up and the old bridge would be eliminated, with the area below it returned to its original habitat. Hardwood trees and other vegetation would be replanted throughout the area where the old bridge's concrete pilings and other structures had stood.

The governor and the Department of Arkansas Heritage Director and State Historic Preservation Officer Stacy Hurst traveled to Washington last year to plead with federal officials to preserve the old bridge. Afterward, Hutchinson wrote a letter to U.S. Secretary of Interior Ryan Zinke asking for a new ecological compatibility study or -- at the very least -- a new hydrology study.

The compatibility study, which is conducted every 10 years, would've been due on Dec. 6, 2017, if the bridge had remained in operation.

In the fall, representatives from the Department of the Interior, as well as state and federal officials, met on the old bridge with Stinson and the Friends of the Historic White River Bridge. The meeting went well, and Stinson said everyone thought a compromise could be reached.

That hope was dashed by a Nov. 3, 2017, letter from U.S. Department of Interior lawyer Daniel Jorjani denying permission for new studies and saying federal officials would not be changing their minds.

The federal agency did not return calls seeking comment for this article.

"I know there is pending litigation to halt destruction of the bridge, and I am hopeful the court gives direction to U.S. Fish and Wildlife to update its 10-year-old hydrology study and determine whether there might be a good compromise that would benefit everyone," Hutchinson said.

With a smile and a polite "I'm all right," Stinson waves away a waitress attempting to refill his tea glass.

He clinches a fist around his steak knife.

"This bridge isn't hurting anything. Right now there's a pier probably every 200-300 feet. One pier," Stinson said. "You're going to plant two to three miles of trees 25 feet apart. You tell me. There's more resistance to the environment right there than leaving that bridge right where it is."

The plan, if the bridge-saving group is successful in court, is to shift the money allotted for the bridge's removal and use it for repairs and to retrofit it to accommodate the bridge's new mission as the longest-elevated biking and pedestrian trail in the world.

The funds -- along with money raised by the organization -- would be placed in the Monroe County Community Foundation, which would accrue annual interest, Stinson said.

From the first hints of resistance six years ago, the Arkansas Department of Transportation attempted to compromise: Clarendon could have the bridge but the two-lane stretch from it would abruptly stop at the western approach. The approach would be sealed off with no exit, leaving people no choice but to turn back.

"Yeah, they offered us the bridge," Stinson said. "The bridge to nowhere."

If the Department of Interior would give them the western approach, hikers and bicyclists could go from Clarendon on the old bridge and follow Arkansas 79 to Stuttgart, then take U.S. 165 to Little Rock.

"When I first walked the bridge, it was breathtaking. You're walking among the treetops, through the canopy in the refuge. It opens up to the oxbow lakes," Hurst said. "It's an asset that I think should be utilized. It would bring new constituencies to the refuge."

Doug Friedlander, who works with the Friends of the Historic White River Bridge and who is a leader of a regional tourism initiative, pointed to the Big River Crossing -- also known as the Harahan Bridge -- as an example of what ecotourism can do for a community.

The Big River Crossing, which opened in October, allows cyclists and walkers to cross the Mississippi River from Memphis into eastern Arkansas atop levees and shares part of the trail property with Union Pacific freight trains.

Plans are in the works to continue the route through the St. Francis National Forest from where the levees end at Marianna all the way to Helena-West Helena. Cyclists could also take a turn at Marianna onto U.S. 79 and pass over the old Clarendon bridge on the way to Little Rock.

"On either of the routes from Clarendon to Little Rock, the trail will touch six counties, not including Pulaski, and many cities and towns therein, offering them all opportunities for economic development," Friedlander said.

It's all part of the Big River Strategic Initiative, a multistate, ecotourism effort that includes cycling paths from St. Louis to New Orleans. The Big River Parkway project will run the entire length of Arkansas.

"The epic trail catalyzed by the adaptation of the bridge will bring economic benefit not just to Clarendon and Monroe County, but a good portion of central eastern Arkansas," Friedlander said.

The plan fits in firmly with Hutchinson's and the Arkansas Department of Parks and Tourism's promotion of the state as the "Cycling Hub of the South." Hutchinson created a Governor's Advisory Council on Cycling when he first took office.

"Ecotourism, cycling and historic sites are new opportunities for bringing money into the local economy," Hutchinson said last week. "The estimated cost to preserve the bridge and turn it into the largest elevated wildlife-watching platform in the world is $5 million, while the estimated cost to tear it down is $10 million to $15 million. Preservation is not only less-expensive, but the bridge will return money to the area. In terms of the taxpayers' money, preservation seems like the smart option."

At Bendi's Diner, Stinson is interrupted midsentence by a man in tattered bluejeans, work boots and a cap.

Stinson shakes his head, shrugs his shoulders, then smooths the blue-and-white-checkered tablecloth.

People stop him all the time to ask about the bridge, Stinson said. He has yet to find anybody, other than the U.S. Department of Interior, who is opposed to saving it.

The Democrat-Gazette found no organized opposition to saving it. One individual who declined to give an on-the-record interview said that if the old bridge remains, the city would end up spending money that could go to other projects.

Stinson leans forward and says, "Did you know the new bridge opened a year ago about 11:30 at night? No grand opening. Nothing."

The old double-cantilever bridge, which was placed on the National Register of Historic Places in 1984, was designed in 1928 by Ira Grant Hedrick and was constructed by the Dallas-based Austin Bridge Co., which submitted the lowest bid of about $1.5 million.

On June 11, 1̶9̶4̶0̶ 1930*, about 25,000 people converged on Clarendon for a grand-opening celebration that included a parade, champagne, an air circus, speedboat races and a high diver who plummeted from 75 feet into the White River below, according to a history of the bridge by Martha Pineda.

Thousands more will once again flock to the old bridge if it is saved, and with them will come new shops and other service-oriented businesses, Stinson said.

He abruptly stops, places his knife and fork firmly on the table and squeezes both hands into fists. 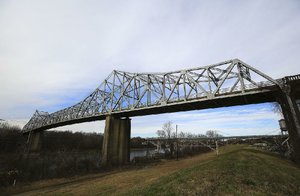 Photo by Staton Breidenthal
The old U.S. 79 bridge at Clarendon is no longer open to traffic and is scheduled to be torn down in the coming months, but a group fighting to save the bridge and turn it into a bike and pedestrian trail hasn’t given up. 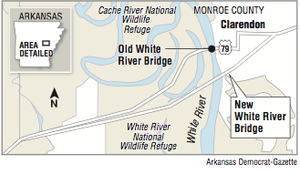 *CORRECTION: On June 11, 1930, about 25,000 people converged on Clarendon for a grand-opening celebration for the White River Bridge. The date was misstated in a previous version of this article.