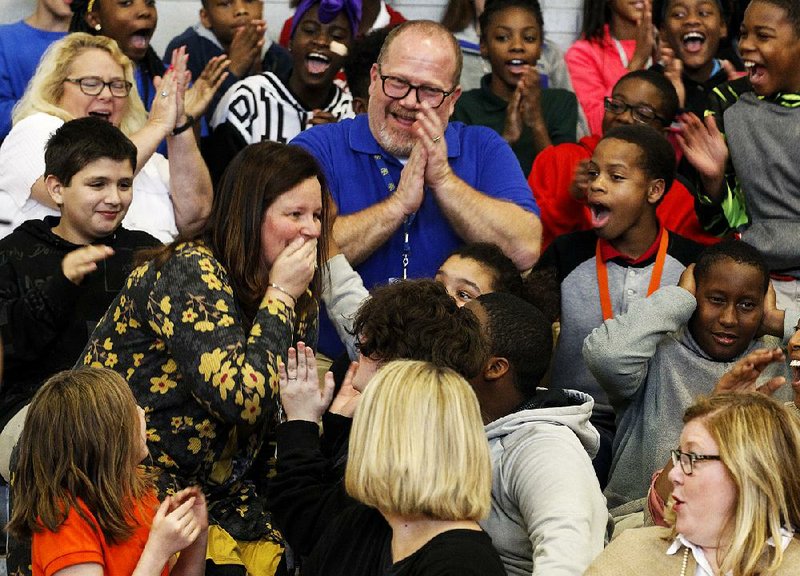 Dawn McLain said she didn't have an inkling that she was going to be named Arkansas' winner of the unrestricted $25,000 Milken Educator Award on Thursday until state Education Commissioner Johnny Key announced her name at a sixth-grade student assembly.

The North Little Rock Middle School teacher of six classes of sixth-grade math made her way down the bleachers where she had been sitting with pupils during a session she thought was about the school's new Opportunity Culture program.

"Rockets, robots and 'rithmetic" earned McLain the award that for years has been called the "Oscar of teaching," the foundation said in its written announcement. McLain, who is 44, is one of 44 award recipients in the nation in the 2017-18 school year and the only one in Arkansas.

McLain in her tenure has taught science as well as math, and she has chaired both departments at her campus. She is a proponent of hands-on and interactive student learning, hence the use of robotics as a teaching tool and a means of engaging students. She is a completer of the Honeywell Educators Space Academy program from which she brought back projects and curriculum for use by her colleagues.

This year she is one of five lead teachers in the school's newly adopted Opportunity Culture initiative. She leads and mentors a team of five teachers plus teacher assistants, all of whom collect and analyze student data, design lessons and otherwise plan together how to best meet student needs.

"I'm shy, and I am in complete shock but I am so grateful," McLain told the crowd that had been enthusiastically prepped by Milken about the significance of the award. "I've loved it here in North Little Rock, and I wouldn't trade it for anything," she continued, adding that her students mean everything to her and she hoped that they knew that.

A little later, McLain's eighth-period class greeted her first with applause and then swarmed her to give her hugs.

"You deserved this," one student proclaimed.

"We all knew you would win," another said. "We called it."

Maddy Draper, 12, an aspiring doctor who is in McLain's first-period class, praised the teacher for her patience with students and for making math understandable with the lesson notes she writes daily on the electronic white board. As a result, math is one of Maddy's favorite core classes.

"I look forward to getting up every day and getting to see her," Maddy said. "She's a really great teacher."

"Wherever there is a need, she takes care of it," Tackett said. "And she doesn't do it for show or flamboyancy. She is very humble and works behind the scenes. She listens and listens well. We're very proud and honored to have her on our staff."

The Milken Educator Awards program is an initiative of the Milken Family Foundation to honor beginning and midcareer educators for what they have achieved and for the promise of what they will accomplish in the future, according to background information provided by the organization.

The awards program has no formal nomination or application process. Candidates for the honor are generated through a confidential selection process and then reviewed by panels appointed by state departments of education, according to the news release. The foundation has final approval on who receives the awards.

Since Arkansas' participation in the award program that began in 1991, more than 70 of the state's teachers and principals have been honored in similar surprise presentations.

This year's recipients are invited to participate in the Milken Educators Forum in Washington, D.C.

McLain said after the assembly that she always wanted to be a teacher but initially earned a business degree from Kaplan University in 2005. Her hometown Blevins School District in Hempstead County offered her a job, and she has been a teacher ever since -- starting with two years in the Blevins School District and the past 10 in North Little Rock, including the six most recent years at the North Little Rock Middle School.

McLain is married to Jeff McLain. She has an adult daughter in the Navy and a stepson.