Wal-Mart sheds hundreds of jobs at its headquarters in Arkansas 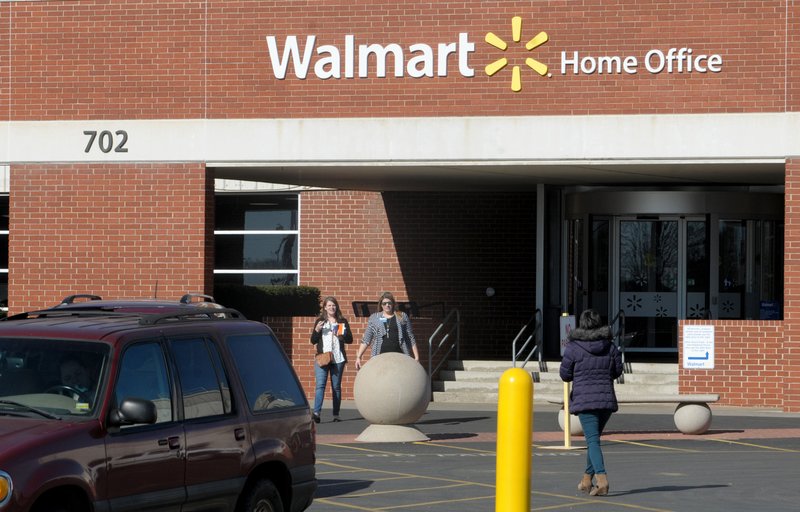 People walk Thursday outside Walmart Home Office in Bentonville. Wal-Mart Stores Inc. conducted a larger round of job cuts at its corporate offices in Bentonville on Thursday, eliminating positions across several departments.

BENTONVILLE -- Wal-Mart Stores Inc. eliminated the jobs of corporate workers in several departments at its headquarters Thursday as part of what the retailer said is an ongoing effort to cut costs and improve the efficiency of its operations.

The company is trimming hundreds of positions in merchandising, real estate, finance, human resources, technology, logistics and global business services, according to multiple sources within the company. The positions eliminated Thursday came a day after the company made a smaller round of cuts in the marketing department.

Wal-Mart has declined to reveal the number of job cuts that have taken place at its headquarters this week, but one source said the number of workers affected in Bentonville is fewer than 500.

Company spokesman Randy Hargrove said the retailer has been evaluating its structure for some time as it explores ways to operate more efficiently. While cuts have been made, other workers have been promoted. Wal-Mart has made numerous decisions to streamline its business and become more nimble to compete with Amazon.com.

"We understand these changes affect a number of our friends and colleagues, for whom we care deeply," Hargrove said. "We appreciate their important contributions to our company. We're committed to handling every transition smoothly and ensuring everyone is treated as fairly and respectfully as possible."

Wal-Mart will continue to pay employees affected by this week's cuts up to 60 days as they look for new jobs and also provide access to outplacement services, training in resume and interviewing skills and counseling through its employee assistance program. If those workers have not found jobs after 60 days, they will be offered a severance package based on position and length of service with Wal-Mart.

The move marks the second-straight year Wal-Mart has conducted a large round of corporate cuts before the end of its fiscal year, which is Jan. 31.

The retailer eliminated about 1,000 corporate jobs last January, including 511 at its headquarters in Bentonville and 174 at two California locations, according to Worker Adjustment and Retraining Notification Act filings. The company made additional cuts in 2017, eliminating a few hundred positions in April and an unspecified number of corporate layoffs a few months later.

Brian Yarbrough, a retail analyst for financial services firm Edward Jones, said the additional round of job cuts comes as no surprise to investors as the retailer continues to invest heavily in technology and its e-commerce business. Wal-Mart acquired online retailer Jet.com for $3.3 billion in 2016 and has since purchased other companies to build out its e-commerce expertise. It also has introduced programs like two-day free shipping, is rapidly expanding its online assortment and is testing package delivery services.

While Wal-Mart's efforts to compete in the evolving retail landscape have largely been applauded by Wall Street, the investments continue to weigh on the company's profit. Yarbrough said it has forced the company to continually find ways to review costs and it has led to headquarters job cuts.

"Their business is in a much better place today than it was three or four years ago," Yarbrough said. "But as e-commerce continues to grow, while the losses are less, they're still losing money [online]. Even when they get to break even, can they ever get anything close to being as profitable as the store level? So I'm sure they're just under constant pressure to find ways to take costs out of the system."

The end of the fiscal year is typically a busy time for the company, and this month has been no exception.

Wal-Mart has made several decisions aimed at reorganizing and improving efficiency, which have come a few months after Chief Financial Officer Brett Biggs told investors in October that the company was not where it wanted to be from an expense standpoint.

Other decisions made this month include:

• Shuttering 63 Sam's Clubs locations with the closings expected to affect about 10,000 workers. Sam's Club said it will convert as many as 12 of the closed stores into e-commerce warehouses and will try to place as many workers as possible in other locations.

• Trimming about 3,500 co-manager positions in stores. Those affected can apply for other positions, including lower-paying assistant store manager roles that are being created.

• Closing two regional operation centers in South Carolina and Utah to improve the efficiency of its operations. The closings will leave the company with two remaining centers in Bentonville and Ohio. About 125 employees work at centers that are closing.

• Closing a Kansas facility that manages accounts receivables for Wal-Mart's health and wellness business. A company spokesman said the Kansas center will close in August, giving 104 employees roughly six months to find new positions within the company or elsewhere.

"It's unfortunate for employees, but it's a positive from an investor's standpoint because they're doing what they need to do to be more efficient," Yarbrough said.

In addition to Thursday's job cuts, Wal-Mart also told additional employees of plans to consolidate and relocate some of its existing facilities as it makes room for its future headquarters in Bentonville.

Wal-Mart, which said last year it intends to have a new campus east of its current home office completed in five to seven years, will move a fashion distribution center in Bentonville and a Fort Smith shoe-return center into a 1.03 million-square-foot warehouse under construction in west Bentonville. The company's print shop -- on the proposed site of the new headquarters -- will also be moved, but the new location has not been determined.

Some of the consolidation and relocation could lead to additional job cuts, Hargrove said. The company is giving those workers a year to prepare.

Wal-Mart typically arranges for an out-of-state displacement firm to help former workers, but Smith said his team will work with them on resumes that fit the market and counsel them on how their experience can transfer to other area companies. He reiterated those plans Thursday.

Adam Arroyos, who started Fayetteville-based Grandslam Performance Associates in O̶c̶t̶o̶b̶e̶r̶ 2012*, said his firm is ready to help as well. Arroyos, who was working for Wal-Mart a few years ago when his job was eliminated, said his company's program is designed to help displaced workers make transitions to new opportunities.

"We have a strong team of associates and we'll serve any number that wants to be served," he said.

Local economists and officials are confident Northwest Arkansas can handle the latest large round of Wal-Mart home office layoffs. November's preliminary unemployment rate for the region was 2.5 percent, according to data from the U.S. Bureau of Labor Statistics.

Bentonville Mayor Bob McCaslin said he received a phone call from Wal-Mart on Thursday notifying him of plans to eliminate positions in several departments. He said the decisions are difficult for affected employees but necessary for the company. McCaslin said he is is confident many of the workers can find new employment at Wal-Mart or elsewhere in the area.

Graham Cobb, chief executive officer of the Greater Bentonville Chamber of Commerce, said earlier this month that the local economy is robust enough to absorb the eliminated Wal-Mart jobs. He said job cuts are never easy, but respects what Wal-Mart has to do to stay competitive.

Wal-Mart has been reducing employees for a variety of reasons during a restructuring process, said Mervin Jebaraj, director of the Center for Business and Economic Research at the Sam M. Walton College of Business at the University of Arkansas, Fayetteville. "You've seen layoffs and store closings, but it's the home office, human resources and real estate offices this time. I think that can be expected in a company the size of Wal-Mart as it 'right-sizes' for its acquisitions and make plans for the future."

Information for this article was contributed by Nathan Owens and Stephen Steed of the Arkansas Democrat-Gazette.

*CORRECTION: Adam Arroyos started Grandslam Performance Associates in 2012. A previous version of this story incorrectly reported the when the firm was founded.