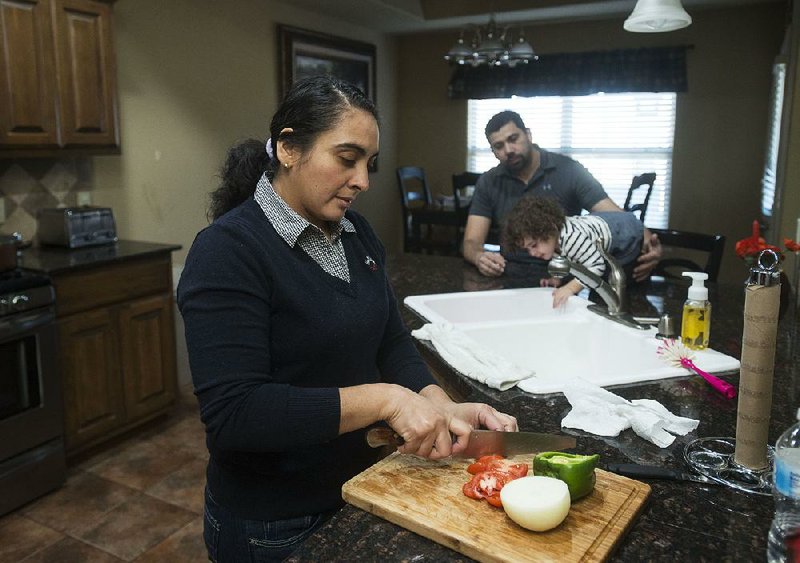 Maria Sanabria prepares a meal Thursday as her husband, Jose, plays with their daughter, Elena, in Centerton. Jose Sanabria said “it’s hard to really give an answer” when he was asked about his status as federal protections for Salvadorans are set to expire.

SPRINGDALE -- Jose Castro, 45, a part-time janitor at Wal-Mart Stores Inc. offices in Bentonville, had been flipping through Facebook when he saw the news. After 16 years, his temporary status in the U.S. was in jeopardy.

Castro is one of thousands in Arkansas affected by the current administration's decision this month to not renew Temporary Protected Status for El Salvadorans. Salvadorans who qualify for protected status have been able to attain permits to extend their stays in the United States consistently since 2001, when two earthquakes devastated the country.

The decision not to renew protected status poses questions for Arkansas employers like Wal-Mart and Tyson Foods Inc. that rely on migrant workers.

"Every time we have to renew the new document, it's the same problem. We don't know if they'll renew, or not. Because every 18 months we have to fill out a new application and pay ... more money, more money," Castro said. Application fees are almost $700 per person.

In a recent interview with the Arkansas Democrat-Gazette, Fernando Garcia, of the Northwest Arkansas Workers' Justice Center, translated for Jose and Evelyn Castro. The Castro family has lived in three states since they fled El Salvador, and now they claim Springdale as their home. Their five children were born here. And if Jose and Evelyn can't find another way to stay in the U.S., separation from their children may become a reality, they said.

"It's not an option to take them back," Evelyn Castro said, fearing increased gang violence in Central America.

It's difficult to estimate the number of Salvadorans in Arkansas who rely on the permits, Garcia said.

Census data from 2016 show that 11,174 people born in El Salvador now reside in Arkansas. This accounts for refugees, those who may hold a student or work-related visa, those with green-card status and those who are unauthorized to live in the U.S. A majority of Hispanics in Northwest Arkansas are from Mexico or El Salvador, Garcia said.

Nationwide 262,526 Salvadorans have Temporary Protected Status, with about 195,000 expected to re-register, according to the Congressional Research Service, using data compiled from the Federal Register and U.S. Citizenship and Immigration Services.

Supporters of renewing Temporary Protected Status have argued that ongoing violence and political unrest in Central America have left countries unable to handle a large-scale return. Opponents, however, claim that ending Temporary Protected Status for El Salvador and Nicaragua is a move toward interpreting the original intent of the program -- to provide a temporary safe haven.

Salvadorans have had Temporary Protected Status longer than most, said Nathan Bogart, a Fayetteville-based immigration attorney.

Eligible Salvadoran nationals in U.S. were first granted temporary status in 1990 and then they were granted it once again after Hurricane Mitch in November 1998. The George W. Bush administration granted the status to Salvadorans in 2001. They make up the largest demographic in the United States protected by the program.

"What do you do when it's been a couple of decades and these people now have homes, vehicles and spouses?" Bogart said.

Temporary Protected Status does not prevent people from pursuing other means of permanent residency. Other options -- including a work visa and naturalization -- are available depending on the person's situation, Bogart said.

Jose Sanabria, 39, first traveled to California by himself when he was 16. Originally from Metapan, a municipality of Santa Ana in El Salvador, Sanabria came to Rogers in 1995. After high school, he began working for Wal-Mart, where he's been for over 15 years. He is now an operations manager for a distribution center in Bentonville and has relied on Temporary Protected Status for most of his life.

"I know my [manager] is worried about it," Sanabria said. "He's asking me, what do I know? What do I think? And it's hard to really give an answer."

Several Hispanic employees work with Sanabria at Wal-Mart. Sanabria wouldn't disclose figures, but he did say a significant number rely on Temporary Protected Status, and don't have a second option. And if what's happening at his location is also happening nationwide, he said, it will affect the largest retailer in the U.S. as well as construction, restaurant and poultry industries.

Tyson Foods and Siloam Springs' Simmons Foods did not disclose specifics on how many of their workers rely on Temporary Protected Status. Both companies said they supported efforts in Congress to resolve ongoing immigration issues. Simmons Foods said in a statement it "cared deeply about its employees facing uncertainty" because of changing immigration policies.

Tyson Foods confirmed in an email that some of its employees do have Temporary Protected Status, and encouraged congressional leaders to find a solution that "considers the businesses impacted and more importantly, the many families and communities involved."