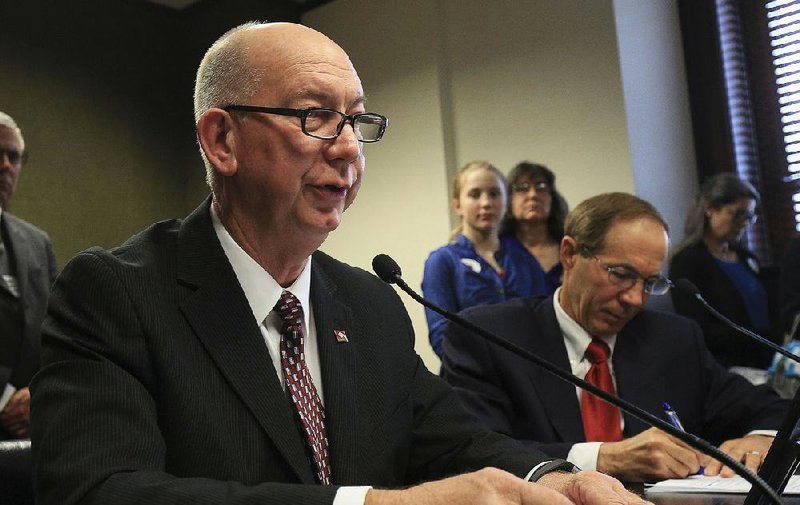 Quick. Who was Publius?

And why do Arkansas high school students need to commit that name -- the pseudonym for the authors of the Federalist Papers -- to memory?

Publius is an answer to one of 100 questions on the test given to immigrants seeking to become naturalized American citizens.

Now, as a result of Act 478 of 2017, that is a test that Arkansas students must take, and answer at least 60 questions correctly to be eligible for high school diplomas or General Educational Development certificates.

See how well you do on these sample questions from a U.S. naturalization test:

The Little Rock School District, along with other districts and charter schools across the state, are making plans to give the civics test to their students as early as this spring.

The new law calls for public school students who will graduate in 2019 and beyond to take the civics test that is "identical" to the test that is used by the U.S. Citizenship and Immigration Services for naturalization purposes. The state law also sets the pass rate at 60 correct answers.

This year's high school juniors will be the first affected by the requirement.

"They can take the test as many times as they want to. There's no cost involved," Rep. Bruce Cozart, R-Hot Springs, chairman of the House Education Committee and a lead sponsor of the bill, said Friday about students. "It isn't anything that should keep them from graduating, just as long as they make 60 percent on that thing. Sixty percent is just barely a D on a regular test, so I don't think anybody will have a problem with it."

Cozart said he believes the new law -- similar to those in other states -- will promote knowledge of the nation and its government among young people.

"The further we go, the less America seems to know about America," he said.

Laura Beth Arnold, the Little Rock School District's social studies curriculum director, said Friday that the state's largest school system intends to give ninth- and 11th-graders two opportunities to take and pass the tests this spring. That should get the new graduation requirement out of the way for those students who are taking, or have recently completed, ninth-grade civics or 11th-grade U.S. history. Both of those courses are relevant to the test.

"There are a few things on the test that are kind of obscure, but for the most part it's basic information," Arnold said. "We know what the test is, and we know what the students should know. I think if the students are prepared -- if teachers work with them -- I think we will be fine. Obviously, they are going to have to study."

Arnold is waiting on guidelines from the Arkansas Department of Education for specific directions on the testing process.

Kimberly Friedman, a spokesman for the agency, said Friday in an email that those guidelines will be on the agenda for the Arkansas Board of Education to consider at its Feb. 8 meeting.

Arnold is anticipating that the test will be given online. She also anticipates that accommodations will be provided to students who have special needs or are not native English-language speakers, just as adjustments are made for the students on other exams.

At the district and school level, Arnold has already met with the district's history teachers and will do the same with the civics course teachers on how to prepare and support students for the test.

In many cases, the civics teachers already use the national test as part of their course for ninth-graders, she said. Notice about the test requirement for graduation will also be given to parents of students in the coming weeks, she said.

The test is posted in its entirety -- with answers -- on the U.S. Citizens and Immigration Services website.

Some of the questions ask for the names of the current president, vice president, speaker of the House of Representatives and chief justice of the United States Supreme Court as well as for the names of a U.S. senator and the congressman who represents the test-taker.

"Name one branch or part of the government," is a question on the test.

"What stops one branch of government from becoming too powerful?" is another.

"Under our Constitution, some powers belong to the states. What is one power of the states?" is another.

Some of the questions deal with history and geography: "Who wrote the Declaration of Independence?" "Who is the father of Our Country?" "Name one U.S. territory," and "Name one of the two longest rivers in the United States."

People seeking naturalization do not take the test in the same way that the Arkansas students will. In the case of immigrants, an interviewer draws 10 questions from the 100-question pool to ask the citizen candidate in a face to face interview.

"We want our students to have that knowledge," she said. "We want good citizens, and they need to be aware of government. I think it is going to take some preparation but I think they will do fine." 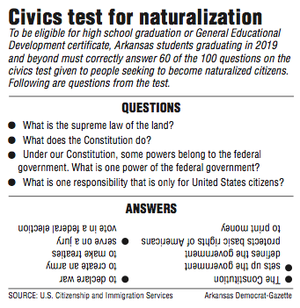