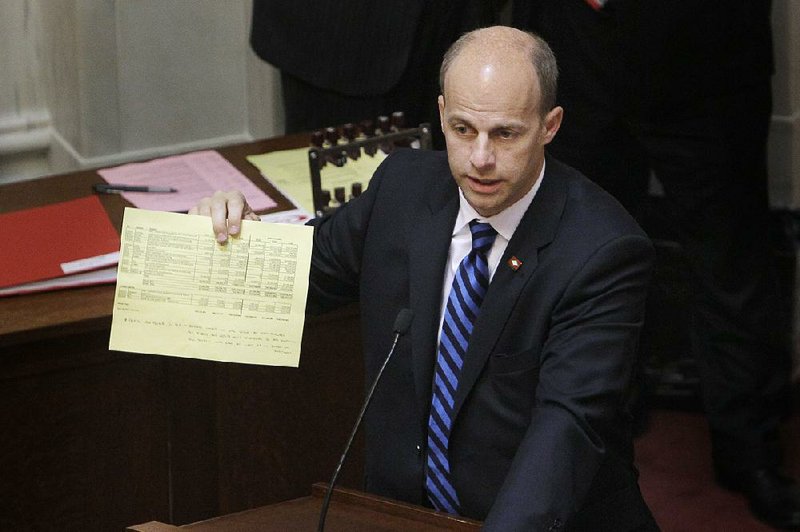 Files was charged in a federal complaint of misusing state General Improvement Fund money and in pledging a forklift that he did not own as collateral for a bank loan in 2016.

After his plea hearing, Files was released on a $5,000 signature bond pending sentencing.

The FBI executed a search warrant against Files in August in relation to violation of federal wire fraud and money laundering laws, according to federal court records. An affidavit states Files put to his own use more than $25,000 in state General Improvement Fund money he had obtained for the defunct River Valley Sports Complex project on Fort Smith property.

Files admitted he falsified bids for water line work for the complex that was awarded to an employee. The employee said she turned over to Files the General Improvement Fund money that Files obtained for the project and that he used it to pay workers of his construction company and give employee bonuses, pocketing the remaining cash.

The Fort Smith Republican who has served in the state Senate since 2011.

Shortly after the plea was made public, the governor issued a statement calling for Files' "immediate resignation."

Hutchinson later said he spoke with the lawmaker, who indicated he will submit his resignation soon.

“While I have known and respected the Files family for many years, it is essential that the voters are able to trust elected officials to have the public’s interest free from criminal conduct," the governor wrote.

Sen. Jonathan Dismang, president pro tempore of the Arkansas Senate, said it was his understanding that Files would resign. He added that he'll be working to "make sure the process is followed."

In a statement posted to the Senate's website, Dismang said: "I consider Jake a friend and I'll be praying for him and his family."

Files announced last year that he would not seek re-election.

The state Democratic Party, which last year said Files should step down, again called on the lawmaker resign after his plea.

"In pleading guilty, Sen. Files is admitting to the corruption that he and the Republican party have denied for months," state Rep. Michael John Gray, who chairs the state Democratic Party, said in a statement. State GOP Chairman Doyle Webb said Monday he had spoken to Files and had encouraged him to resign.

Files' plea is the latest case involving misuse of the state's surplus money. Republican former state Sen. Jon Woods and two others have pleaded not guilty to corruption charges after prosecutors said they participated in a scheme under which Woods allegedly directed state money to Ecclesia College in return for kickbacks, and are set to go to trial this spring. Republican former state Rep. Micah Neal pleaded guilty last year to one count of fraud related to the case.