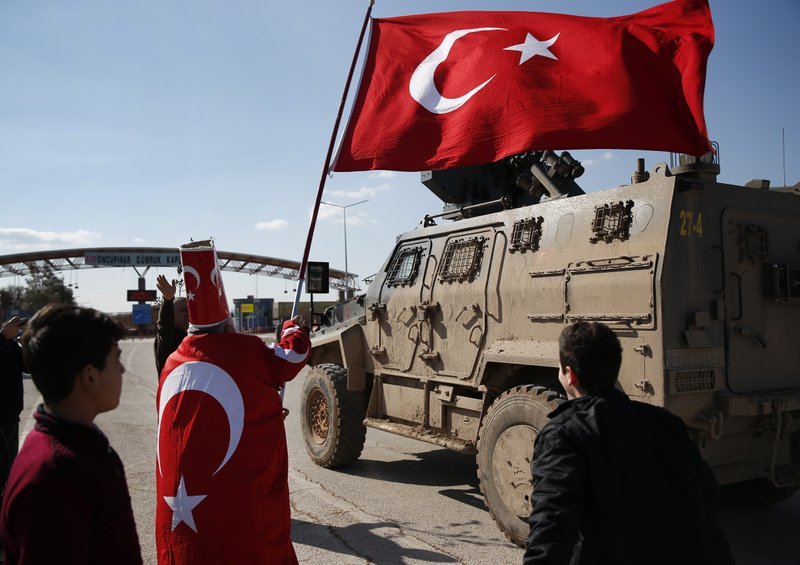 In support of the Turkish forces' offensive, codenamed 'Olive Branch' in the Kurdish-controlled enclave of Afrin, Syria, Isikli Tosun Baba, 60, dressed in a Turkish flag, waves one as a Turkish forces armoured personnel carrier is driven past, at the Oncupinar border crossing with Syria, known as Bab al Salameh in Arabic, in the outskirts of the town of Kilis, Sunday, Jan. 28, 2018.

KILIS, Turkey -- Turkish troops and allied Syrian fighters captured a strategic hill in northwestern Syria on Sunday as their offensive to root out Kurdish fighters entered a second week.

The Turkey-backed forces have been trying to capture the hill, which separates the Kurdish-held enclave of Afrin from the Turkey-controlled town of Azaz, since the start of their offensive on Jan. 20, but have been met with stiff resistance.

The Kurdish militia known as the People's Protection Units said Turkey sent reinforcements to the area after intense airstrikes on Sunday. It disputed the claim that the Turkish troops and allied fighters were in full control of the hill, saying its forces had redeployed and will fight to reclaim the strategic area.

Abdurrahman said the airstrikes also targeted the area around Afrin's main dam for the second time since the offensive began. There were no immediate reports of damage to the 17 April Dam, which provides water and electricity to the Kurdish enclave, home to hundreds of thousands of people, many of whom have fled from other parts of Syria.

The Observatory said at least 51 civilians, including 17 children, were killed i̶n̶ since the offensive began* S̶u̶n̶d̶a̶y̶, including eight people from the same family. It said 66 People's Protection Units fighters and 69 Turkey-backed Syrian fighters were also killed. Turkey says five of its soldiers and 16 allied fighters were killed in the fighting. The People's Protection Units said one of its female fighters blew herself up, destroying a Turkish tank in southwestern Afrin.

Turkish President Recep Tayyip Erdogan said in a speech Sunday that there were reports that the People's Protection Units was holding Turkish soldiers captive, adding that Turkey was taking steps to try to bring them back. Erdogan's statement did not make clear the number of soldiers who were missing or whether they were alive.

Reports also emerged that an ancient temple in Afrin was badly damaged in Turkish airstrikes that struck its courtyard late Friday, according to the Observatory, the People's Protection Units and the Syrian government. In a statement published on the Syrian Arab News Agency, the government antiquities department condemned the destruction of the temple.

Images showed stones piled up in the open courtyard of the temple of Ain Dara, an Iron Age Syro-Hittite temple that dates back to sometime between the 10th and 8th centuries B.C. The temple, which features sculptures of lions and sphinxes and "the giant footsteps of the gods," was noted for its structural similarities to Solomon's temple as described in the Bible.

In the images taken of the destruction, none of the statutes were still intact, with rubble and metal scraps strewn across the temple's floor.

The Syrian Arab News Agency said a mosque was also damaged in airstrikes in southwestern Afrin.

A Turkish military official said the airstrikes did not target religious or cultural sites, adding that the images were insufficient to determine the cause of the damage. The official spoke on condition of anonymity in line with military rules. The extent of the damage to the temple could not be independently assessed but the Observatory said it was badly damaged.

In a speech to party members in northern Turkey, Erdogan again vowed to expand the military offensive eastward, toward the Syrian town of Manbij, which is held by U.S.-backed Kurdish fighters. The crowd responded by chanting: "Hit, hit! Let it reverberate and let [President Donald] Trump hear."

Ankara views the People's Protection Units as a terrorist group because of its links to Kurdish insurgents fighting in Turkey. The group also forms the backbone of the Syrian Democratic Forces, a U.S.-backed militia that drove the Islamic State group from much of northern and eastern Syria.

The United States has expressed concerns about the Turkish campaign, fearing it will distract from efforts to defeat the Islamic State and ensure the extremists do not regroup.

On Sunday, dozens of people gathered near the Kilis border crossing, chanting "God is great" and waving Turkish flags. Public displays of support for the offensive have been widespread in Turkey, while critics have been detained.

Information for this article was contributed by Zeynep Bilginsoy and Sarah El Deeb of The Associated Press.

*CORRECTION: The Britain-based Syrian Observatory for Human Rights reported that 51 civilians have been killed since Jan. 20 in the fighting that began when Turkish troops and allied fighters targeted for capture a strategic hill held by Kurdish militia fighters in northwestern Syria. A previous version of this story incorrectly reported that all the deaths occurred Sunday.