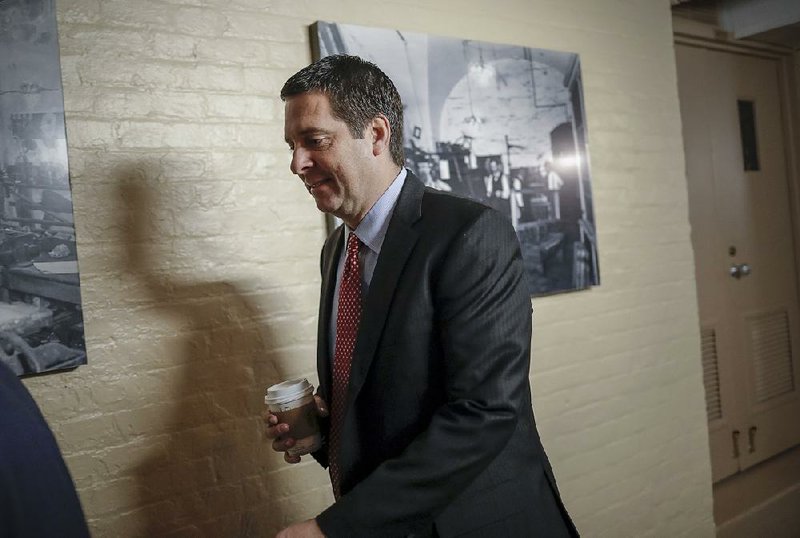 WASHINGTON -- House Speaker Paul Ryan on Tuesday defended the way that Intelligence Committee Chairman Devin Nunes handled a politically divisive vote to publicize a classified memo detailing alleged surveillance abuses by federal law enforcement agencies, but he warned against using it to discredit the special counsel's probe of Russian meddling in the 2016 election.

Ryan, R-Wis., said Nunes, R-Calif., was following a well-established process when the committee voted Monday to release a GOP-drafted memo to the public, provided President Donald Trump does not block its efforts within five days. The White House said Tuesday that it will conduct a legal and national security review before Trump makes his decision.

But on Tuesday night, Trump was overheard telling Rep. Jeff Duncan, R-S.C., that he favors letting the public see the memo.

"Don't worry," the president told Duncan on the House floor after delivering the State of the Union address. "100 percent."

Duncan had implored Trump to "release the memo."

Also Tuesday, the Intelligence Committee voted along party lines to make a Democrat-drafted memo rebutting the GOP's document available to House members to read in a secure facility, as the panel had done with the GOP memo 11 days earlier.

Ryan suggested to reporters that "there may have been malfeasance at the FBI by certain individuals," citing that as one of several reasons Republicans want "all of this information" contained in the memo "to come out."

But he stressed that "the chairman went to the FBI to make sure we were protecting sources and methods," calling it "ironic" that Democrats were complaining, as "Devin actually made the motion" Monday to make the Democrats' memo available to other House members.

Democrats have claimed that Nunes withheld the memo from the FBI and the Justice Department until the last minute, resisting the advice of top officials who were warning against making it public.

The Washington Post reported Tuesday evening that late Monday, Justice Department officials made a last-ditch plea to White House Chief of Staff John Kelly about the dangers of publicly releasing a memo alleging abuses by the FBI.

Shortly before the House Intelligence Committee voted to make the document public, Deputy Attorney General Rod Rosenstein warned Kelly that the four-page memo prepared by House Republicans could jeopardize classified information and implored the president to reconsider his support for making it public, according to people briefed on the meeting.

Rosenstein was joined in the meeting at the White House by FBI Director Christopher Wray.

Rosenstein, who is supervising special counsel Robert Mueller's investigation into Russia's interference in the election, said the Department of Justice was not convinced the memo accurately describes its investigative practices. He said making the document public could set a dangerous precedent, according to a person familiar with the discussion.

While Wray also expressed opposition to the memo's release, Rosenstein did much of the talking, according to a senior U.S. government official. Attorney General Jeff Sessions was not present at the meeting.

Wray has had the opportunity to review the memo, though it has not been vetted by the FBI's in-house lawyers, according to people familiar with the matter.

On Tuesday, White House press secretary Sarah Huckabee Sanders pushed back on reports that the release was imminent, saying the White House had no "current plans" to do so.

"The President has not seen or been briefed on the memo or reviewed its contents," she said in a statement.

The memo deals primarily with the role that intelligence passed along by British ex-spy Christopher Steele played in the FBI's efforts to conduct surveillance on Carter Page, a former Trump campaign adviser, according to people familiar with the four-page document.

Steele's work, which was partially funded by Hillary Clinton's presidential campaign and the Democratic National Committee, led to a dossier of allegations of ties between Trump and the Kremlin. Trump has denied the allegations, and Republicans have suggested that Steele provided bad information to the FBI -- though people familiar with the memo say it does not conclusively say whether Steele intentionally passed along suspect information.

Several Republicans and conservative pundits have seized on the memo as a reason to question the underpinnings and legitimacy of Mueller's ongoing probe of alleged connections between the Trump campaign and Russian officials. But on Tuesday, Ryan firmly warned people against drawing such links.

"This is a completely separate matter from Bob Mueller's investigation, and his investigation should be allowed to continue," Ryan said, adding that the "institution" of the FBI and Justice Department is "very important for American life."

Revelations last week that Trump sought to order Mueller's firing in June have raised new concerns that the president may try to oust the special counsel or Rosenstein, who oversees the investigation. Democrats have been clamoring since to pass legislation to protect Mueller, by giving a panel of three federal judges the power to review any presidential order to fire a special counsel.

Republican leaders have rejected Democrats' concerns, as well as their calls for legislative steps to protect Mueller.

"My understanding is there's no effort underway to undermine or to remove the special counsel. Therefore, I don't see any need to bring up legislation to protect someone who appears to need no protection," Senate Majority Leader Mitch McConnell, R-Ky., said Tuesday.

Ryan said that calls for Rosenstein to step down also were misplaced.

"I think Rod Rosenstein's doing a fine job. I have no reason to see why he should do that," Ryan said, noting that Rosenstein "came in after this last election."

Democrats, however, say the GOP's memo campaign is compromising the integrity of key law enforcement agencies in political deference to Trump, at a time when they need to be especially vigilant against potential threats from Russia.

Senior Democrats openly questioned why Republicans chose to focus their attention on the memo Monday instead of Trump's decision not to sanction Russian officials on the administration's newly released oligarchs list, which mirrors a list Forbes magazine compiled of the wealthiest Russians.

"These are mandatory sanctions," Senate Minority Leader Charles Schumer, D-N.Y., said. "He is ignoring them and he is not implementing them ... making things worse."

Sen. Lindsey Graham, R-S.C., has rejected Democrats' argument that releasing the memo will compromise the country's law enforcement agencies or otherwise undermine the special counsel's Russia probe. He has expressed support for the House GOP's campaign to release the memo, and is working himself to determine which underlying documents -- which were also provided to the Senate Judiciary Committee -- ought to be declassified.

In the House, lawmakers were waiting for the president to decide whether the memo will be released to the public. In the meantime, members have been instructed to stay mum about its contents, according to Rep. Mark Meadows, R-N.C., chairman of the House Freedom Caucus.

"We need to make sure we don't share anything," Meadows recalled leaders saying during a GOP conference meeting Tuesday morning.

In another development, people familiar with the matter said the Justice Department's inspector general has been focused for months on why Andrew McCabe, as the No. 2 official at the FBI, appeared not to act for about three weeks on a request to examine a batch of Clinton-related emails found in the latter stages of the 2016 election campaign.

The inspector general, Michael Horowitz, has been asking witnesses why FBI leadership seemed unwilling to move forward on the examination of emails found on the laptop of former Rep. Anthony Weiner, D-N.Y., until late October -- about three weeks after first being alerted to the emails, according to these people, who spoke on the condition of anonymity to discuss the sensitive matter.

A key question of the internal investigation is whether McCabe or anyone else at the FBI wanted to avoid taking action on the laptop findings until after the Nov. 8 election, these people said. It is unclear whether the inspector general has reached any conclusions on that point.

A major line of inquiry for the inspector general has been trying to determine who at the FBI and the Justice Department knew about the Clinton emails on the Weiner laptop and when they learned about them. McCabe is a central figure in those inquiries, these people said.

The FBI declined to comment, as did a spokesman for the inspector general. An attorney for McCabe did not respond to a request for comment.

On Monday, McCabe left the FBI, after a meeting with Wray in which they discussed the inspector general's investigation, according to people familiar with the matter. Horowitz announced in January 2017 that he was examining the Justice Department's handling of the Clinton investigation. His report is expected in the spring.

The matter of the Weiner laptop emails has been debated publicly for more than a year, in part because many Clinton supporters say the FBI tilted the 2016 race toward Trump when it announced in late October that it was reopening its probe into Clinton's use of a private email server when she served as secretary of state.

Key parts of what went into that decision have remained murky and are a major focus of the inspector general's probe, according to people familiar with the matter.

Separately on Tuesday, the House Intelligence Committee's interview with former White House chief strategist Steve Bannon was delayed, according to two people familiar with the decision. The people spoke on condition of anonymity to discuss private committee deliberations.

Bannon was set to be interviewed privately today. But one of the people familiar with the decision to delay it said it was premature to schedule it this week because discussions with the White House over what Bannon can tell the committee have only just started.

The committee subpoenaed Bannon earlier this month after he refused to answer questions about his time in the Trump administration at the direction of the White House counsel's office.

Rep. Mike Conaway, the Texas Republican leading the House investigation of Russian interference, said that Bannon's subpoena, which is set to expire today, can easily be extended.